Heavyweight Reflections On the Sport That Was—and Still Is 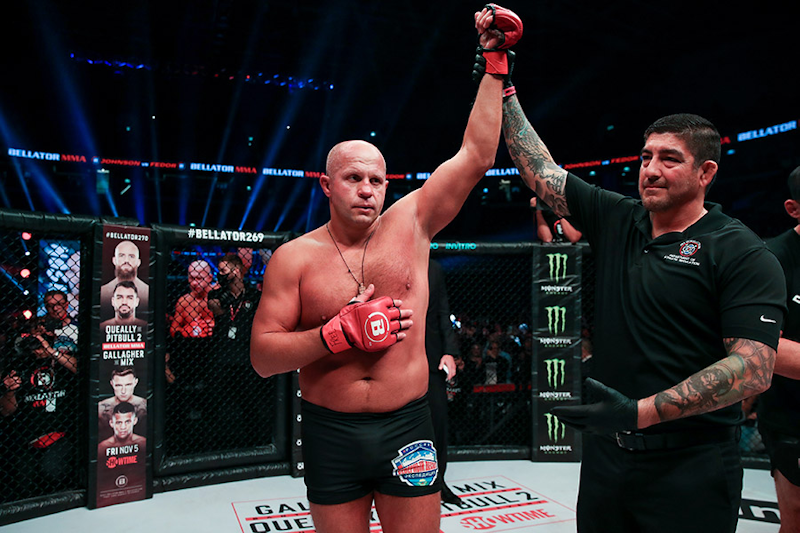 Memory deforms the past. The old MMA champions of a still relatively new sport are cherished by nostalgic writers who were young when they were. The kids will be that way about Francis Ngannou and Ciryl Gane in a couple of years, mark my words. A heavyweight title fight incites recollections that are often either slanderous or reverent with flattery and exaggeration. It's a personal matter, and a writer’s descriptions of athletes are influenced as much by feeling as by truth.

My gallery of remembrances of heavyweight champions begins with Dan “The Beast” Severn. He had the dignity of a Michigan farmer who’s proud that his manual work is hard and unrelenting. His was a kind of glittering monomania for the mat, as the pain of Olympic near-misses in amateur wrestling sharpened his singular skill set.

Severn was patient and made his fights with a stolid belief that his mean occupation demanded a wrestler must endure suffering as long as the referee allowed him, which in those early days could be a very long time. In his “superfight” rematch with Ken Shamrock at the peak of Shamrock’s steroid-enhanced size, Severn laid atop Shamrock like an old bear because his philosophy of winning at all costs wasn’t shared by opponents with greater and more varied skills. He held Ken Shamrock down, and no natural man—no fighter whose broad farm-boy frame was untouched by the needle—ever made more of a valiant effort.

The most well-rounded heavyweight I’ve ever watched was Stipe Miocic, the Cleveland State wrestler turned fighter and fireman. Stipe’s hands were quick, and a right hand that was often nothing more than an arm punch—no leg behind it at all—would stun the other guy against the cage, and then he’d put the combinations together with a rapid accuracy to get it over with. His big feet were slow, but his movements were precise and he herded the killers he was fighting, like the first time he beat Ngannou when that didn’t even seem possible. When he was younger and his wrestling was really working, a fight could be over if he got his hands on his opponent. He could be knocked down and knocked out—Stefan Struve proved it earlier in his career, as Alistair Overeem, Daniel Cormier, and a revenge-seeking Ngannou would later—but most of the time he came up quickly and his head was clear once he was on his feet. The way he finished Overeem, who had him in trouble, was a thing of beauty.

As a light heavyweight, Maurício “Shogun” Rua was great. He was nimble and cautiously clever, and he dodged and kicked like someone on the soccer pitch. Consciously, he trained to compensate for a lack of hard muscle on his modest frame. It all went south when he came to the UFC and couldn't kick grounded opponents in the head anymore. He had a nice little back-and-forth series with countryman Lyoto Machida, but the triumph associated with finally getting past Machida—supposedly the sport’s next big thing—gave way to getting smashed by Jon Jones, who’d rule the 205-pound class for the next decade.

What Jones did to Rua was an act of vandalism, not even a sporting event. It made me sad, because Rua was a symbol of Pride—the doomed Japanese fight federation we all knew was better—and I immediately disliked Jones because he’d destroyed that symbol.

The style of Aleksei Oleinik, the old boa constrictor, was sneaky. The Ukrainian-born Russophile knew all the moves, and he seemed to be in a permanent ambush waiting for his man to make a mistake. If you were a grappler like Fabrício Werdum or a wrestler like Jared Rosholt, he could beat you with his awkward striking, and if you were a striker like Travis Browne he’d just choke you out.

Oleinik never seemed to be beating up on the other guy. He was always bleeding, sometimes a minute into the first round, as they harassed him. There was no fury or joy in him—few of the Russian fighters have it—and the casuals demand this of a fighter.

The endurance of K-1 Grand Prix champion Mark Hunt was inhuman, and he was a mercilessly strong man. So hard was his body that Fedor Emelianenko appeared to be hurt simply by bumping into his 300-pound frame. He was like a belligerent turtle, all his vulnerable parts inside a thick shell. When he couldn’t get to your face, as was the case with the taller Derrick “Black Beast” Lewis, he’d hit you on the arms and smash blood vessels until your hands dropped and you could be punched to the jaw.

He was beaten badly by Stipe Miocic in their main event. But he lasted, bloody and torn, until the fifth round against a technically superior foe. He often fought out of an awkward crouch that made him look even shorter and wider than he was, but was always in a position to leap forward to counterpunch.

Overweight and elderly, Fedor Emelianenko was knocked out by Ryan Bader—surely another PED creation—at the close of the Bellator Heavyweight Grand Prix in 2019. 46-year-old Fedor, who’s on what is hopefully a PED-abetted winning streak and will rematch Bader in February for his retirement fight, has had a career that has to be the most bizarre of all times in the corrupt MMA racket. In Pride, he alternated between fights with solid contenders like Mirko Cro Cop and freak-show bouts with the likes of Zuluzinho, a morbidly obese Brazilian who has resurrected his career on the slap-fighting circuit. He never got to fight Josh Barnett, which was a shame.

Fedor’s jawbone was frail, but by the standards of the notoriously businesslike Russians, his heart was big. This was good, because he was on his rump frequently, rocked by everyone from Kazuyuki Fujita to Kevin Randleman. In that Pride period, there was no gamer fighter. In a way, he was handicapped because of that brittle jawbone. Late in his career, the likes of Dan Henderson—a middleweight, for crying out loud!—and Bigfoot Silva had no problem sending Fedor to the Land of Nod.

It’s impossible for me to measure Fedor until I know how his story ends. Even in his 40s, he’s capable of quitting on anyone and beating anyone. Perhaps he’ll go out on his back—or maybe he’ll get a second wind and that won’t happen until he’s finally sleeping the big sleep, like we all will. I still remember when Fabrício Werdum caught him in that triangle and ended the Fedor Myth, which was also the story of Pride. I refused to believe it then, for the same reason I later refused to believe that “Shogun” Rua would lose to Jones. For me, Fedor was the greatest, even when he wasn’t.

Some people will tell you a person you think is ugly is the world’s finest beauty. It’s that way with the heavyweight champions. You can’t match them across the generations, and computerized “dream fights” are for the birds. But seldom can someone change their mind once they decide a heavyweight champion is the greatest of all time.