Why the Yankees make my teeth hurt and thoughts on the Red Sox’s lackluster offseason, partially saved by extending Rafael Devers. 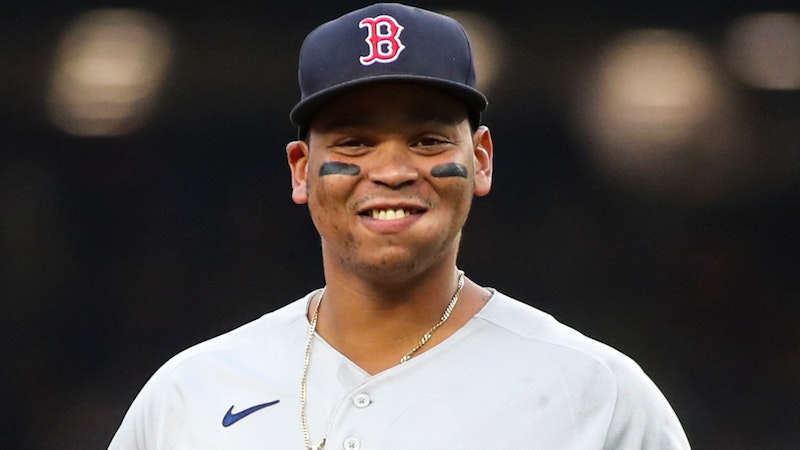 One of the oddities I encountered last year was in October when the New York Yankees squared off against America’s Team, the Houston Astros, in the ALCS. After a horrendous Red Sox season my fear—bordering on the irrational but that’s how sports messes with a normally sound mind—was that the Yanks, spearheaded by All Rise Aaron Judge and Nestor Cortes, would make quick work of Houston, advance to the World Series and win it all. In the first inning of the best-of-seven games, October 19th, my top left molars, in unison, barked and bit, and as I grimaced and popped an Advil, thought, terrific, another root canal on the way. I ate on the right side of my mouth, but no relief. (Until seven or eight years ago I had an excellent run on the choppers front, with just four cavities since adolescence, but once I turned 60, all that was out the window because teeth… just get old and crack when you least expect it.)

This continued for the duration of the ALCS, which, mercifully, was a 4-0 sweep by the Astros, although a couple of the games were tense, far more than the midterm elections a few weeks later, which although I lost a few bucks and was disappointed the GOP didn’t win both chambers of Congress to render President Sippy Cup irrelevant, didn’t bug me as much as the baseball, since political cycles come and go. And then, when the Astros clinched the A.L. pennant on October 23, a rain-delayed game, my toothache vanished. I couldn’t believe it, thought it was maybe just a respite from the dull yet nagging pain, but next morning it was all swell: the Yankees were done for another season and there was no need to call the dentist.

I’d guess that’s an anecdote one too many for some people—especially New York fans—but it’s my quirk, and, as quirks go, it’s fairly benign, at least compared to the legions of furrowed brow self-appointed Social Media Generals who conjure up conspiracies in their sleep; recount their dreams for anyone willing to read; gratify themselves lustily in a Democracy-Is-On-the-Precipice circle jerk; and take after the guy who paraded in front of The Baltimore Sun building in the 1970s with a sign reading “The End is Near,” when the temperature on any given day is 10 degrees above normal. The early theme of Democrats in 2023 is that now 76-year-old Donald Trump is fading from politics (at least I hope so, and that the blowback against him isn’t a mirage) Gov. Ron DeSantis is—who’d have guessed!—worse than his fellow Floridian and so We The People must ignore Santa and pout, cry and stamp our feet.

Back in the non-fantasy world, I normally roll my eyes when baseball fans—some of whom, unlike me, follow the NFL, NBA, NHL and college sports for crying out loud—exclaim, “Just 45 days until pitchers and catchers report to spring training!” The prelude to another baseball season doesn’t generally interest me much, except worrying that key Red Sox players will be injured (Chris Sale is bound to hit the IL in mid-March after sleeping funny on his shoulder) and put a damper on Opening Day. But this year, despite another, and now-expected, lackluster offseason at the hands of Boston Chief Baseball Office Chaim Bloom, I’m really looking forward to the commencement of baseball activities.

It may be perverse, since all the “experts” (meaning the thinning corps of sportswriters, as in number of them, not their expanding waistlines) predict another last-place finish for the Sox, or, at the best, a nose-out of the Orioles for fourth place in the A.L. East, but I’m curious if Bloom can at partially redeem himself, after the Xander Bogaerts fiasco, and stitch together a winning team that’ll nab one of wild-card spots. It’s not inconceivable: Boston’s bullpen, with the addition of Kenley Jansen and Chris Martin, is improved, the acquisition of Japan’s Masataka Yoshida is potentially exciting (my favorite onetime Oriole, Adam Jones—who was inexplicably treated like dirt by Baltimore’ front office—said that Masataka, whom he’d seen play in Japan, might be next Juan Soto), Justin Turner might have one more explosive year in him, and if Bloom can find another bat and some magic beans to feed Trevor Story to keep him healthy, Red Sox Nation might not be so glum in mid-May. And if the team falters, then Boston’s owners will likely send Bloom on his way, inevitably to a commentator position on a garbage-bin baseball TV network.

Not that Bloom’s entirely to blame for the trepidation regarding the Sox—as Boston Globe scold Dan Shaughnessy noted since primary owner John Henry (who’s more silent than Silent Cal Coolidge) and his very obnoxious cohort Tom Werner—rightfully blamed for the firing of NESN’s beloved Don Orsillo, a vindictive move that began the sour feelings among fans, the 2018 World Series win a brief and glorious respite—are apparently averse to spending money. I’ve noted this many times, but it bears repeating: there’s no excuse for any MLB franchise owner—all very wealthy—to play skinflint and horde the proceeds from revenue sharing. In fairness, Henry’s only a middling (and recent) offender, especially compared to the proprietors of the Orioles, Pirates, Guardians, Rays, Reds and so on.

And who doesn’t love the spend-spend-spend bravado of Mets owner Steve Cohen—whose questionable past is just more public than his MLB colleagues—as he says fuck it to the penurious luxury tax in an attempt to win the first World Series for his club since 1986. His blockbuster acquisition of Carlos Correa (the 12 years is insane, and as of this writing the deal’s still pending for medical approval) was outrageous, and if the our-balls-are-caught-in-a-sling Dodgers release Trevor Bauer, the great pitcher (and also an asshole, judging by his social media from a few years ago) who was absurdly suspended for 324 games because of alleged, but not proved, sexual crimes, and no criminal charges) I’d bet Cohen signs him, despite his radioactive reputation. The Dodgers, now that Bauer’s suspension was reduced to 194 games, have until Jan. 6 to keep or boot him. The ghosts of Bill Veeck, Charlie Finley and George Steinbrenner reside, jubilantly, in Cohen’s Flushing office.