I immediately sought names of kids who loved baseball and would want to play fall ball. 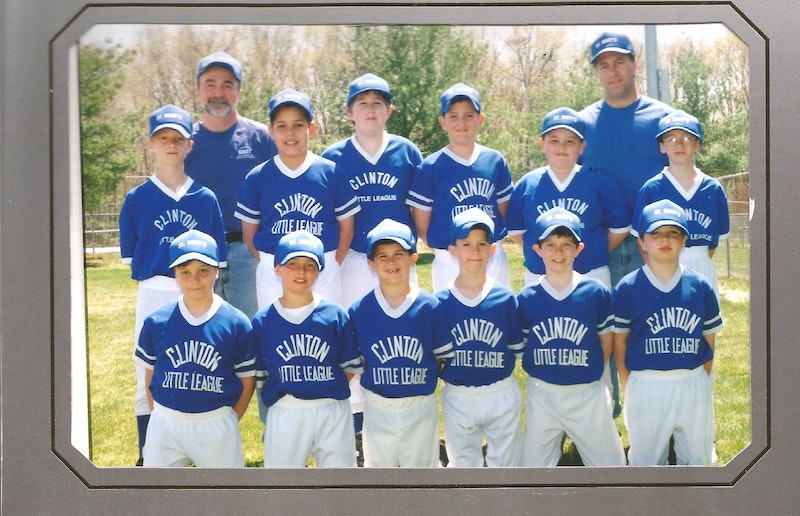 I coached Little League for a few years in Clinton, Connecticut, located around 30 miles east of New Haven. My son Billy had been throwing, catching and hitting baseballs as long as he could pick one up, so we did just one year of T-ball at age six. We had a two-year plan in the seven-eight-year-olds and had a good team the second year. I’d coached soccer with another guy when Billy was eight and we decided to coach together the nine- and 10-year-old Little Leaguers the following year for two years. We got to know the Ortiz family. Mom and Dad had moved to our town from Puerto Rico a few years before, and they had two sons, Julian and Giovanni. Julian was big and round and occasionally blasted the ball with a resulting long single or double. Giovanni was the youngest player at eight and small, wiry and fast. He was fast enough to challenge a 10-year-old who’d stated that he was the fastest runner on the team.

We were about halfway through Billy’s age-nine year, the 1999 season, when the other coach introduced me to 10-year-old Ricky Ortiz, cousin of Julian and Giovanni. He was large and big-boned, polite and terribly shy. He spoke little English, didn’t swing at any pitches—every at-bat was a walk or strikeout, and seemed sluggish in the field. I’d try to encourage him, but knew he didn’t understand much of what I was saying. We ran him out there every game, just as we played everyone else and a funny thing happened. Ricky had complained about an injured shoulder when he first came to the team and one day he said it felt fine. Suddenly, after a few weeks, Ricky was chatting with the guys, swinging the bat and improving. His assimilation was jump-started by playing baseball. I felt he had experience, but the word was he’d never played on an organized team before and had the language barrier. Ricky had a breakout game, with three hits including a ringing double that knocked in the winning run.

I was keen on having Billy play catcher because it sharpens your hand/eye coordination and all other positions are easier after that challenge. The next game I asked Ricky if he wanted to try playing catcher for a few innings, which also allowed Billy and the other catcher some time at other positions. In three games he was as good as any other catcher in our age group. When Ricky stood up in the catcher’s gear, almost as tall as some umpires, it was a bit intimidating. It wasn’t long before Ricky was yelling how many outs we had and where the play was going. Pretty soon, Ricky played all the positions and there was no worry about how he’d do. I feel that the games and practices were the most fun he had every week and worked well for his “mainstreaming” into our town. Billy and the other guys on the team were his first friends at school and I was happy when Billy said that he had lunch with Ricky at school. By the end of the season, Ricky became a very good player and was popular with the kids and parents of our team.

The years that I coached Billy in soccer came about because I wanted him to do something in the fall. He had baseball in the spring and basketball in the winter. Billy was not a big guy and Mary (Mom) wasn’t keen on Billy playing football. Over the years he probably played about as much sandlot football as I did. After an absurd year of soccer, Billy wanted no more. It was tough getting our asses kicked most every game. I went to a coaching clinic to get a clue about soccer. I’m not a soccer guy and Billy isn’t either. So the next year nine-year-old Billy asks innocently, “Can we play fall baseball?” I had no clue but  asked around and a few of the guys in our town’s Little League steered me toward a Shoreline Fall League that had nine- and 10-year-olds. It covered our town, Clinton and several shoreline towns. Within a few days we got signed up. As a Yankees fan I asked for and received navy blue uniforms from the Little League—which also covered insurance for us as part of the year. I was never a fan of the foam rubber hats that the league used so I got a deal on beautiful navy blue hats with a block white “C” from the Clinton Sport Shop. I immediately sought names of kids who loved baseball and would want to play fall ball. I knew to reserve fields with the Park and Rec folks. The fields were often prepped by the Park and Rec crew.  Other times the coaches and I raked the field. We loved it.

In any event, fall baseball gave us some great friendships with kids and their parents. Fall baseball isn’t a babysitting service. Normal Little League is in many circumstances. I’ve given kids a ride home when it wasn’t pre-arranged. Spring Little League was a place to drop off the kids for some parents. Fall ball is different. The kids and parents are all in and it’s fun. The Ortiz boys and cousin Ricky wanted in. I also recruited Tom Richards,who was the best tactical coach I ever worked with. His son Matt had great hands at first base and was a crafty left-handed pitcher. Tom Taylor also helped with coaching and his son Adam was our best player. That first year of fall baseball was different for the kids. The boys could take a lead off bases. We were a young team that first year. We lost our first four games as other teams ran on us and forced a lot of bad throws. The good news was the kids learned. New rules, tougher competition and they learned to stop throwing the ball around when things went wrong. We went 6-4 our last 10 games.

Ricky was Mr. Popularity and a team leader, plus he was funny. We lost a game in Westbrook, the next town east of Clinton. They have a beautiful field with screened-in grandstands behind home plate. After the game I was giving Ricky and Josh a ridehome and we stopped for hot dogs. It was one of the nicest days ever in coaching 10 years of baseball. The kids loved the dogs and fries and they were kidding around. What we still talk about today is when we got in the car Ricky started leading the three of them in Queen’s “We are the Champions” except “almost” is installed right before “the champions.” Bill still remembers that. Another time we showed up to play the Essex team and their coach ambled over to me as he eyed Ricky, and says, “Did your catcher drive the team bus?” I laughed my ass off. “He’s big, but he is 10.”

Ricky deserves mention because of one of the craziest, funniest things that ever happened in all the years I coached Billy and that familiar group of guys. We were holding onto a slim lead and a guy I love to this day, Vinny, wanted to pitch. I said sure. He was a big kid and could throw hard. I hadn’t seen him pitch before but Vinny was as enthusiastic as any baseball player I ever coached. And he could hit a baseball far. Unfortunately, he had a problem throwing strikes. On that day with a two-run lead in the last inning, he threw 12 straight balls and we had the bases loaded with no outs. Billy was playing second base and I brought him in to pitch, primarily because that 16th straight ball almost went over the backstop. I could always count on Billy to throw strikes.

Billy did throw a strike. His first pitch must’ve caught a lot of the plate because the kid hammered it to right-center field. I don’t know if I’ve ever seen a Little League kid hit a ball harder. All the runners took off. My fellow coach Tom and I looked at each other. That’s three runs at least. We look out and holding his glove as if he’s listening to a transistor radio is centerfielder Ricky. He makes a sweet catch running full speed toward right field and Tom and I are both yelling “Throw it to second base!” Ricky simply glides all the way into the infield, steps on second and throws to an alert Adam at third and triple play! Billy records a one pitch “save.” Tom and I are going crazy, the kids are screaming and yelling and the parents are in disbelief. That was the one year I coached Ricky and it was fun. Our first fall team wound up 6-8, the kids learned a lot and we all made new friends.

The next year Ricky was too old when we won the championship in the fall league. All the kids were a year older and that was a really good team. Carl DeFranco joined us and I let him coach third. He was very good and his son CJ was onlyeight but could play. There were cookouts at my house as well as Tom’s, which had a pool. Billy, Garrett Coady, Matt Richards, Matt Halliday, Adam Taylor and Mitch DeMazza all played varsity baseball for our high school.