When a Rooster Gets Cancelled

RQ’s cousin deals with the fallout from his unearthed tweets. 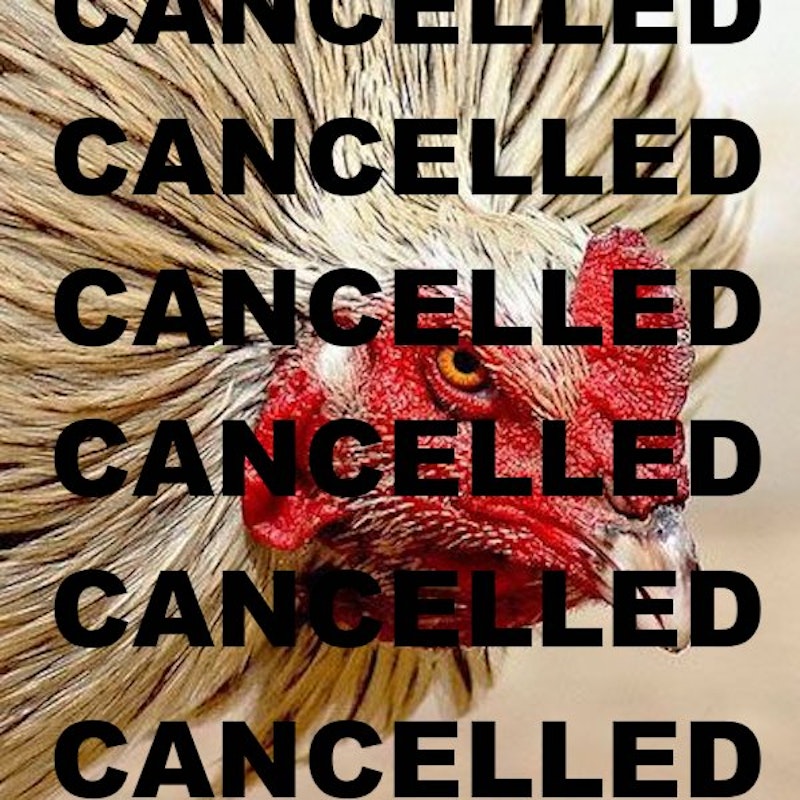 So apparently I’m “cancelled” now. I’m not on social media (except Twitter and Bumble), so I wouldn’t know. But I get messages, I get smoke signals. There are people after me. Even my own family is egging them on: I’m pissed at Monica, who keeps goading me on Twitter to apologize for saying I have “big cock energy.” Why? Does she disagree? How would she know? My cousin Rooster isn’t doing much to help me, too crippled by his migraines and misplaced paranoia lately.

I’ve been accused of inappropriate gestures and “sexually-adjacent remarks.” This is the one “they’ve” latched onto: “it’s my birthday please pet me.” This wasn’t addressed to anyone. Maybe it was the Twitter bird that got pissed at me. Blue dumbass. We know nothing about him. Or her. Or gender-nonspecific. I’m walking on eggshells here as you can see.

So I’m going to rebrand. No, I haven’t made the front page of DRUDGE yet. I’m not trying, but then again that’s when you get noticed. People start following you, sniping behind your back. It’s a drag. But I’ve seen how much money public intellectuals like Jordan Peterson, Bret Weinstein, Ben Shapiro, Neil DeGrasse Tyson, Guy Fieri, and Noam Chomsky are making. I mean, they’re killing it. Just by getting up on stage and talking! And writing books, I suppose. Probably ghostwritten—I can get my cousin to do it. All of those people I mentioned are far right-wing, militant as far as I know, so I’m gonna go soft. Get ready for the new Bennington: tapioca, vanilla flavored, pre-chewed for easy consumption. I’m not going to say anything controversial, no swear words, no spitting, no more inflamed glands or outsized thyroid complaints. I’ll be good, I promise.

But I will not apologize for this or this: I said, “I am on Viagra. I am high from it.” It’s true. I didn’t have a prescription, I didn’t need it (serious), and I didn’t show anyone. I’m not going to address this in my talks. I’ll be targeting colleges, hospitals, public libraries, VFW halls, suburban basements. I’ll be the DIY Jordan Peterson, but instead of insulting transpeople and saying that women should be in jail, I’ll be telling them something very basic that few know: you need to clean your room. Don’t think anyone has yet addressed this yet on the speaking circuit. I’m going to have cardboard cutout stands with my face and hundreds of copies of my book in every Barnes & Noble in America. No, the world. I’m going to be eating grass in Norway and doing lines, I mean laundry, with Lars Von Trier in Denmark. Maybe I’ll “walk the streets” with Michel Houellebecq in Paris. The sky is the limit for me because I’m without a care in this whole world. Just please: STOP TALKING ABOUT ME!