Farewell to The Finger

The middle digit fades into obscurity. 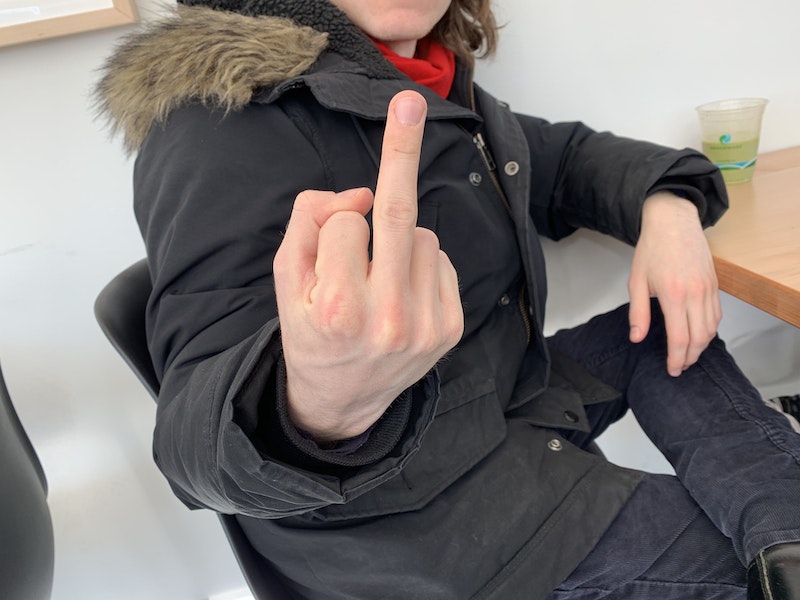 Over the weekend my friend Doug Henwood indulged himself on Twitter and Facebook, saying—facetiously, I assume—that he was “reeling” that The New York Times, the onetime stiff paper that was habitually (and correctly) ridiculed for replacing “vulgar” words with “barnyard epithet,” as if many Americans have occasion to frolic and swear in a barn, printed the word “motherfucker,” after first-term Rep. Rashid Tlaib said that in juicing up her view that Donald Trump needs to be impeached. (Tlaib has since apologized for creating a “distraction.”) I’ve no interest in combing through thousands of back issues of the Times, but I’d bet 50 clams that the daily has, in fact, printed a “bad word” in the past 20 years.

Tlaib’s exuberance has almost expired as a dumb talking point, as stuffy op-ed writers have moved on to this or that enticing “outrage”—they’re compensated handsomely for what thousands of Twitter users post for free—but it’s my hope that mainstream news outlets will now feel liberated from puritanical, and often contradictory, linguistic style guides. As my son Nicky wrote for Splice Today on Monday this is how millions of people speak, in private and public. One of the best moments of the 2000 campaign when George W. Bush, in an aside to Dick Cheney at a campaign rally, pointed out the late Times reporter Adam Clymer, calling him a “major league asshole.” In 21st-century America, where anything goes, a prohibition on printing “curse words” is beyond “quaint” and just silly.

Walk down any city street and you hear people yelling at each other in the most foul language imaginable, and, if you’re like me, it’s just part of the landscape, as are the spent pint bottles of Seagram’s on the sidewalk, the occasional pile of human shit, used condoms and all matters of unsavory detritus. (Younger people, born in the post-AIDS era, are probably unaware that condoms were once referred to as “rubbers” or, less delicately, “scumbags” in the 1960s, and, because of The Pill and other contraceptives, suffered a decline in sales. It’d take a more dedicated devotee of conspiracies than me to provide any evidence, very likely flimsy, that the pharmaceutical companies that manufacture “French Letters”—I’m getting fancy here—privately rejoiced when the nightmare scourge of AIDS, years before effective drugs were available, scared everyone crazy and condom sales soared, and some madcap engineer was responsible for the disease to begin with, since it really just popped up out of thin air.

Anyway, it’s not 1962 (or the 1950s when Lucy and Ricky Ricardo slept in separate beds and the word “pregnant” was verboten on their show), and a far cry from when I was seven and was scolded by mother for saying, “God, I don’t believe that!” Even as a lapsed Catholic, she was cross, saying that was an unacceptable expression, taking the Lord’s name in vain and all. Jesus! I thought. It wasn’t like I said “motherfucker.”

Along those lines, has anyone else noticed that the once-incendiary gesture of raising your middle finger to someone when pissed off—The Finger—has decreased as a means of signaling displeasure? It was once the unspoken equivalent of saying, “Fuck you,” and could guarantee a session at the principal’s office during school hours.

In college, I rarely engaged in physical confrontations with objectionable classmates—who needed that?—but one time, upon leaving the Johns Hopkins campus bar, (when the Maryland drinking age was 18), at the two a.m. closing time, a velly belly full of beer, I bumped into a couple of jocks and spilled some an ounce of two from my to-go cup on them. Bad behavior, absolutely, but I was in no mood and when they understandably yelled at me, probably with a barnyard epithet, I kept walking to the john and gave them the finger for good measure. Hey, just a gesture, but these fellows wanted to “take it outside.” I was game, but my companions wisely defused the situation (again, entirely my fault), I apologized and we wound up shaking hands. What a weird world.

Similarly, use of The Finger was so ingrained in American, or at least urban, culture, that when jaywalking in New York City when a motorist mouthed off, you just raised the middle digit and kept moving. There are several oft-reproduced photos from 1960s anti-war demonstrations when protestors were snapped angrily giving the finger to the cops. I marched in lots of those rallies, but jeez, always refrained from antagonizing the police, since not only did they have billy clubs and guns but also were inclined to treat any provocation with force.

Today, I almost never see anyone using The Finger, and it’s not as if I live in a gated community, or God help me, a retirement home. Could be wrong, but I think that gesture has been sent down to the minor leagues of obscenities, in the same category as “darn” or “damn you.”