The Disciplined Heart of Marie Kondo

A look at the decluttering star’s new series. 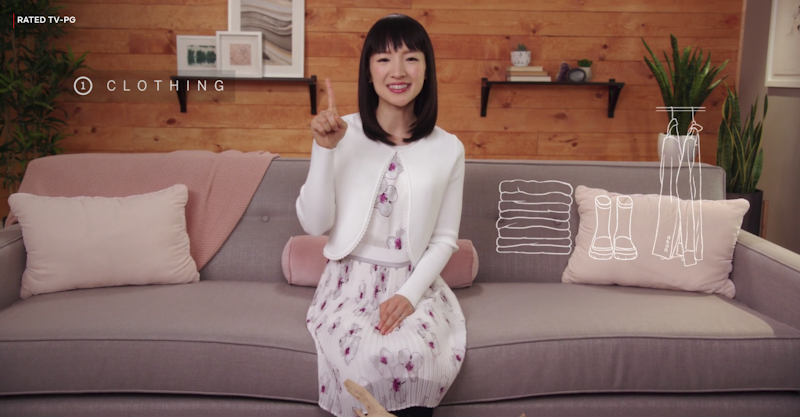 Marie Kondo is a beautiful, tiny woman from Japan who has made decluttering an international craze. Now she’s the star of a Netflix series, Tidying Up with Marie Kondo. In it she descends on a series of cluttered homes and persuades the various families to upend their thinking about what they really need to keep. The results are life-transformative or something. “Marie brought a whole bunch of joy upon our home,” one survivor says. In the meantime there may be some muffled, fluttering-moth conflicts between husband and wife, and there’s definitely the sight of adults trying to be good children and to think as teacher tells them.

Luckily Kondo is small and non-threatening. She’s a happy sprite, not a grim task master.  Shows have their rituals, and Tidying Up always gives us a few seconds of the star—dressed in a white sweater, a skirt, and black stockings—as she walks from the curb to the front door of a given episode’s house. Kondo’s wand of a torso and black bobbin of a head swing along as her eager legs take her to a new decluttering adventure. Often enough these front-walk interludes are in long shot. We see that Kondo’s heels, knees, and calves are all quite pronounced without being clumsy. Instead the look is of something lovely bolted together from parts.

Once the front door is open, Kondo giggles and exclaims. (A charming young woman, Marie Iida, translates for her.) We all know the type of the giggling little Japanese woman. Kondo is to this type what Chrissie Brinkley is to the long-legged, high-breasted, sun-kissed, blonde American cheerleader. That is, she takes her type’s appeal about as far as it will go, to the point that reality appears to warp and one suspects hallucination. In her spindly, foreshortened, black-banged, faultlessly featured way, Marie Kondo is perfect. But does she have the goods, decluttering-wise? Well, she has some of them.

Kondo’s tidying philosophy resulted from a breakthrough she had when young: don’t look for what to throw out, look for what you want to keep. Hence Kondo’s central advice, which is to notice when you really like something, when looking at it makes you perk up a little. Learn to recognize that moment, she says, and you can separate out your necessary things from the things that you’re merely fond of or used to having around. This is zero-based budgeting. Nothing gets the benefit of the doubt: if you don’t love it, it’s gone. Her method centers on the heart, but it’s a disciplined heart, an adult heart. It recognizes that life will go on and more memories will pile up and available space won’t get much larger.

Of course, Kondo’s system is for sentimental clutter makers, people who cling to objects because of the memories they bring. I’ve done that, but more often I’m fixated on whether I’ll feel stupid. If I dispose of this thing, will I find down the road that I need it? I flinch from that moment, so the thing stays. Tidying Up has nothing to say about my problem. Consider Kondo on the storing of papers. She says to keep just one place for them in the home, and to distinguish between papers that call for some action on your part (letters, bills, etc.), important documents (passports, birth certificates, etc.), and miscellaneous, meaning papers that you get out and consult now and then (magazine clippings, seminar notes, etc.). But how do you decide which miscellaneous papers you’re really going to read? For that matter, how do you decide which important documents stay important? For instance, when is it safe to throw out bank statements? Silence. It’s too bad. The show may have the cure for a widespread form of clutter. But it’s not the cure for clutter, full stop, and one was rather hoping.