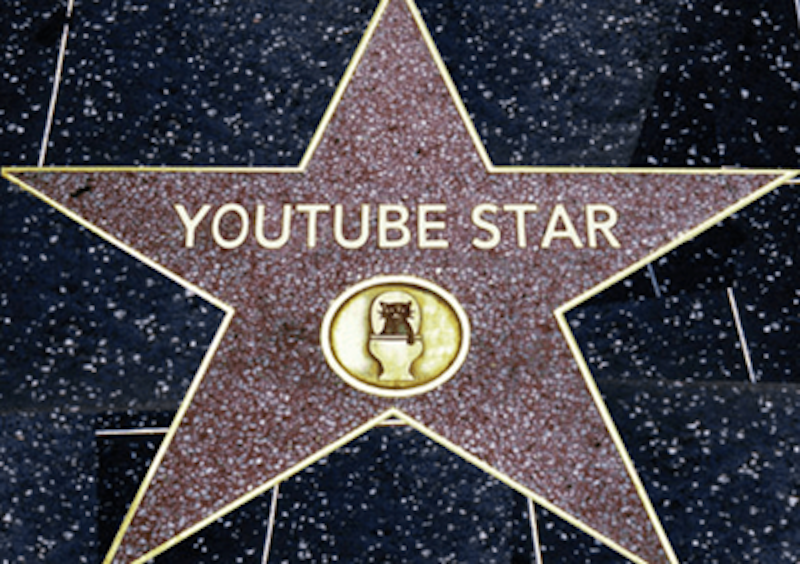 One of the best things about technology is that there’s so much of it. No matter where you look, some kind of fun invention is making your life a lot easier than it used to be. Back before our slap-chopping devices, chocolate-melting pans and microwave-safe omelet makers, who knew how to do any of that? I sure didn’t.

As young, in-the-know Millennials, Gen Z’ers, and iGens, we have benefited from the intellectual largesse of our Elon Musk-scented top inventors. But sometimes, two technologies war against each other—and only one can emerge victorious. Such is the case with the bitter struggle between television and YouTube.

For many years, the only way you could see your favorite celebrities was on the television. There were those tiresome, shitty superhero movies at the theater, but with the economy always being in a depression or recession, few people had the money (15 bucks for an IMAX ticket!) to get there on a regular basis.

With the advent of YouTube, however, the script has flipped. Instead of watching celebrities, you can videotape yourself doing something wild and ridiculous and thereafter join their ranks. You can apply cosmetics, open smartphone boxes, play video games, and occasionally mumble some racist, sexist, or homophobic nonsense, all to the delight of an audience of selfie-taking sociopaths reared on tablets and smartphone screens. Those choreographed falls, Old Long Johnson cats, and drooling little cutie-pie babies on America’s Funniest Home Videos pale in comparison.

Users can now create any kind of show they please and earn a cut of the profits if they draw a lot of eyeballs to their dumb bullshit. Are you a half-assed sex expert who wants to ham-handedly cut off discussion of gender fluidity to impress your alt-right boyfriend? Interested in “pranking” and “punking” your children to achieve modest fame [https://www.splicetoday.com/digital/daddyofive-s-five-minutes]? Want to spice up your nerdy music video reviews with unabashedly racist parodies of rap songs? Or maybe you just want to straight-up insult every identity group in the country with a truly incoherent music video that shows how batshit crazy you’ve gotten since Adult Swim cut you loose? If these happened to be among your talents, YouTube all but guarantees you Internet stardom.

Television has fought back the best that it could, but its celebrities just don’t seem like they can compete. Good old alpha nerd Sheldon has entertained us for the past hundred years, but he’s no match for cheaply made Russian cartoons that don’t make a lick of sense. Those dancing d-list actors and retired NFL running backs might still showcase all the right moves for old-timers who never used up the 600 free minutes that came with their AOL install discs, but they’re out of step with a youth culture that gets its jollies watching a doctor puncture pimples and extract the pus.

Back in the dark ages, people tuned in to spectacles like The Voice to watch America’s sexiest chipmunk-cheeked pop country singer criticize the singing abilities of deluded, talentless people. Now a few quick searches on YouTube will turn up millions of these tedious, amateurish performances—and you can supply your own vicious commentary. Afterward, you can Auto-Tune those comments, edit the whole thing on Final Cut Pro, upload the new video to YouTube and try to become as famous as that celebrity you’ve always wanted to be and still might become.

Technology wars always end badly for the loser. How many people remember that the Diamond Rio mp3 player came before the iPod? That there was a show called Two and a Half Men? That Zeus, Baal and Isis preceded Jesus? That Steve & Barry’s served as an anchor store in many suburban malls? That Buffalo has a professional football team? That anyone wore cargo shorts, ever? These and many more outdated technologies have been abandoned to the tender mercies of the user-maintained archive known as Wikipedia.

As sad as this kind of forgetting might seem, you can’t fight city hall, and you can’t stop progress. To paraphrase the late Walter Benjamin, who was never on Oprah and whose works were never posthumously selected for her book club, the storm of progress leaves behind a pile of debris that grows ever closer to the sky. As YouTube continues to fill with the detrital offerings of would-be celebrities, all of us must realize that it too will eventually be surpassed by some technology that is even more awesome but which, fortunately for the likes of PewDiePie and Laci Green, has not been invented yet.