Patty Schemel’s Hit So Hard is a bracing memoir through addiction and recovery. 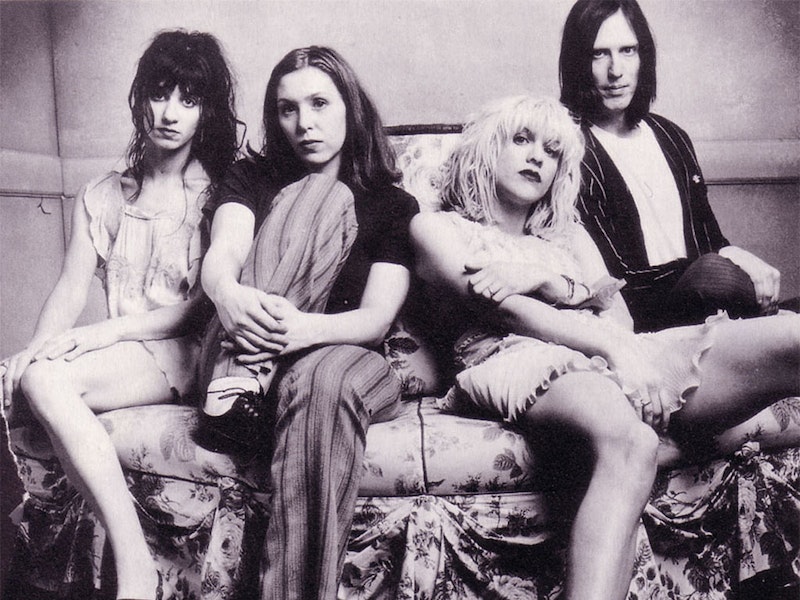 "I had to fill all that was empty.” In the summer of 1998, Patty Schemel was about to hit a low point in her life. Recently fired from her band Hole, she’d received a lump sum of $150,000 for her work on Celebrity Skin, a record that she wrote the drum parts for but was replaced by a hired hand during the sessions because of Michael Beinhorn’s inexplicable hostility and her bandmates’—Courtney Love, Eric Erlandson, and Melissa Auf der Maur—indifference and doubts about her sobriety. Schemel’s new memoir Hit So Hard dispenses with the wistful intros of similar books and jumps straight into the muck: “I was born recovering. I don’t remember a time before I knew the concept.”

Her parents were both recovering alcoholics and hosted AA meetings in their house weekly. Like so many rock stars of the 1990s, Schemel was in and out of detoxes and rehabs (some voluntary, some mandated by management) for many years, and with a six-figure check in her pocket, a habit to maintain, and an abundance of free time, she spiraled down into every circle of hell.

Drinking led to heroin, heroin led to crack, and the combination led to complete destitution and homelessness, living in a tent and prostituting herself just to “keep well.” Earlier in the book, when Schemel writes about having her first drink at 12, she put into words something I’ve tried to articulate for years: “With the first drink or drug we feel finally ‘at home.’” It’s different for every addict, and those free of chemical dependency, count your lucky stars. That feeling of finally being “at home” is one of the most powerful and profound experiences one can have; if you’ve been through it, it’s easy to see how deep one can sink, even if one’s own path leveled off along the way, long before the streets, the shooting galleries, or the abscesses and rotting teeth.

When Celebrity Skin came out, Schemel writes: “I heard my picture was on a billboard on Sunset—an ad for the new album. I couldn’t be bothered to drive to Hollywood to see one more reminder of my failure, and my new house was a cocoon wherein I could pretend my life was a success.” Just five years earlier, Hole was recording Live Through This outside Atlanta, and when that record came out six months later, mere days after Kurt Cobain’s body was found, they became one of the biggest rock bands in the world, and not simply for tawdry tabloid fascination and eerie coincidences: Live Through This is a classic, a record I didn’t know that well before I covered it in full with several friends three years ago under the name Pee Girl.

We spent months rehearsing the songs and I never got sick of them, they never lost their power, particularly “Asking for It” and “Doll Parts,” a song with only three chords that stops and starts in syncopated fits before exploding at the end, Love screaming that “Someday you will ache like I ache.” But despite deserved plaudits at the end of 1994 and a mostly successful world tour in 1995, addiction and luxurious rock star per diems got the best of Schemel and she was lost for many years, without a band, without a home, without a purpose beyond procuring and consuming drugs by any means necessary.

I often buy rock star memoirs and any Nirvana-related books totally blind, never expecting much: the bottom of that barrel has been scraped, shattered, and broken through, and there’s nothing left but dust. Courtney Love’s memoir will be one of the greatest in rock history if she ever gets around to finishing it. But inside scoops and technical details weren’t what compelled me to read Hit So Hard, it was the focus and thorough investigation of addiction, recovery, and the life of someone who’s been acquainted with the program her entire life.

Miraculously, things worked out for Schemel, but her experience is distinct from other famous addiction and recovery memoirs, like Anthony Kiedis’ Scar Tissue, Duff McKagan’s It’s So Easy, and so many of the stories in Lizzy Goodman’s recent oral history Meet Me in the Bathroom. Hit So Hard is blunt and full of hilarious burns and bitchy quibbles, a world away from Carrie Brownstein’s excellent but more mannered Hunger Makes Me a Modern Girl (parallels abound: Gen X lesbians born into working class families in the late-1960s and finding salvation in punk and the underground).

There’s enough here for a Hole fan uninterested in addiction, but Hit So Hard is a remarkably clear-eyed and blunt exploration of chemical dependency and recovery, a compelling book even if you’ve never heard a note of Hole’s music.