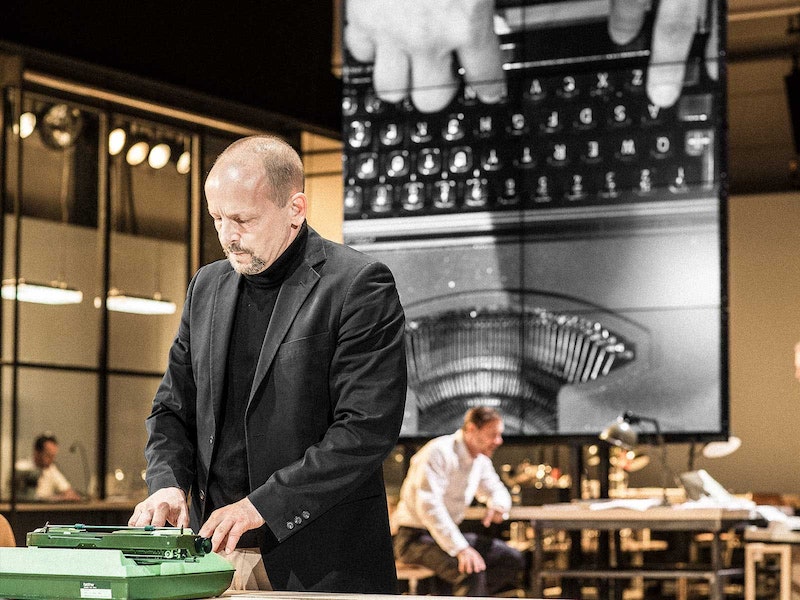 Ayn Rand is a name you generally don’t expect to see in conjunction with “progressive arts festival.” The Russian-born crusader for capitalism and ultra-individualism who died in New York in 1982 is a bête noire for the left, not to mention an object of scorn for the highbrow set that sees her as an author of glorified pulp novels crossed with interminable ideological tracts. And yet here we were, “here” being the Brooklyn Academy of Music, whose annual Next Wave Festival featured a stage adaptation of The Fountainhead, the best-selling 1943 novel of ideas, architecture, and sex that propelled its author to cult status.

I believe The Fountainhead, whatever Rand’s numerous detractors (left or right) may say, is a brilliant book. The epic tale of the architect Howard Roark, who lives life on his own terms and refuses to compromise his bold vision, only rarely gets heavy-handed with its message; its heroes, while romanticized and outsized, still exist in a recognizably human world (unlike John Galt of Atlas Shrugged); its baddies are more than one-dimensional caricatures. It has some great descriptive passages and riveting emotional moments. And, despite some anti-welfare state polemical jabs (set between 1921 and 1939, the book captures that era’s cultural mood shift toward the belief that socialism was the wave of the future), The Fountainhead’s ideas are primarily philosophical, not political; it is, as Rand said, about individualism vs. collectivism in the human soul. While the story’s main villain is the socialist intellectual Ellsworth Toohey, most of Roark’s antagonists are actually businessmen who use their influence to enforce social conformity.

The Next Wave Festival stage version, produced by Belgian theater director Ivo Van Hove, made its debut at the Holland Festival in 2014; it’s only the second adaptation of The Fountainhead (the first since 1949, when it was made into a rather stiff movie with Gary Cooper, Patricia Neal, and Raymond Massey). It’s a highly stylized work with a set that’s both minimalist (a plain desk and a flat couch serve multiple functions) and high-tech, with overhead screens that sometimes show the actors in close-up and sometimes text from the book, with pulleys and audiovisual equipment—and musicians and video artists at work—onstage. There’s a lot of techno music, with some old jazz mixed in. Oh, and the play is performed in Dutch (with English supertitles), which probably adds to the surreal effect.

The novel is nearly 700 pages long, and the show packs an impressive amount of material into its four hours (and never feels slow). There’s the rivalry between Roark and his fellow architect and frenemy Peter Keating, a bright, charming, mediocre people-pleaser whose goal is not achievement but success. (In Rand’s terminology, Keating is the quintessential “second-hander”—someone whose existence is entirely dependent on others.) There’s Roark's struggle to build as he wants to build, which at one point leaves him penniless and forced to work as a laborer in a stone quarry. There’s the beautiful Dominique Francon, the daughter of Keating’s boss and a newspaper columnist who writes about architecture; a frustrated idealist who fears and despises conventional society, she falls passionately in love with Roark but actively tries to destroy his career because she believes the world doesn’t deserve his genius. There’s the yellow-press tycoon Gail Wynand, a man who has potential for true greatness but wastes it on a misguided quest for power, and is almost (but not quite) redeemed by his marriage to Dominique and his unlikely friendship with Roark. And there’s Keating’s doomed romance with Toohey’s niece Katie, the only genuine thing in his life, which he destroys through his own social climbing.

The love triangle of Roark, Dominique, and Wynand—or actually quadrangle, since Dominique marries first Keating and then Wynand to act out her self-loathing—is central to the play. There’s a lot of onstage sex, including full frontal nudity (gender-equitable, I’m happy to say, with both Roark and Dominique on display) and overhead screen projections that leave little to the imagination. It’s startling but not gratuitous; the sexual frankness conveys both raw intensity and vulnerability.

There’s also the sensitive question of rape—sensitive at any time (even in the pre-feminist era when the novel was published) but especially in the current post-Harvey Weinstein, #MeToo climate. The Roark/Dominique relationship starts with a violent attack. True, Dominique practically dares Roark to do it (and is clearly drawn to him from the moment she lays eyes on him); but this is not a romance novel-style ravishment in which the heroine half-heartedly resists but then willingly surrenders. The scene in the book is extremely brutal, with Dominique ferociously fighting back until she is overpowered. Van Hove does not tone it down, and the result is as disturbing as it should be; but the violence is also treated as part of a dynamic that is both sexual combat and clash of wills.

This production starkly captures the unmistakable S&M element in Randian sexuality (in later consensual and passionate scenes, Dominique’s orgasmic cries sound much like her scream of pain during the rape); but despite the extreme male dominance, the female in this mating dance is deadlier than the male. Van Hove’s Dominique, superbly played by Halina Reijn, is gorgeously willful, sensual, brave, and greedy, with a steely intelligence and sarcasm; she is masochistically submissive to Roark but also cruel in her own right, and yet capable of exquisite tenderness.

If it all sounds like an over-the-top soap, it is at times; some of Dominique’s lines drew laughs from the audience that were clearly not intended by Rand—though quite possibly intended by Hove. (Her “I’m getting married again” when she comes to tell Roark about her self-punishing marriage to Wynand, was delivered in a way that clearly underscored the moment’s absurdity.) But Hove’s Fountainhead is much more than sexual grand guignol. Rand’s ideas remain intact, presented honestly and respectfully: the individual’s superiority over the crowd (civilization, Roark declares in a pivotal speech, is about freeing man from other men); the supreme freedom of the lone creator; the celebration of the human spirit and the human drive to reshape nature (in Randian aesthetics, skyscrapers are always superior to the most beautiful landscape); admiration rather than compassion as the cardinal virtue.

One of the production’s more intriguing devices is the figure of Keating’s mother (Frieda Pittoors), who uses her self-sacrifice for “Petey” as a tool of passive-aggressive coercion while she ruthlessly pushes her son to pursue success at any cost. Mrs. Keating is sometimes present onstage during scenes of which she is not a part, sitting at her table as a mute onlooker—a symbol of societal pressure for conformity and a reminder of the banality of well-meaning evil.

Along the way, there are many thought-provoking observations—for instance, that what we think of as destroying a person’s dignity or self-respect actually means taking away their illusion of dignity and self-respect, or that doing what we truly want is not the easiest choice but often the hardest. And some of the rare explicitly political points are quite timely: when Toohey points out (circa 1937) that the two ascendant ideologies of the era preach the submission of the individual either to racial solidarity or to the dictatorship of the proletariat, it feels disturbingly relevant to 2017.

The cast is excellent; Reijn is well-matched by a quietly compelling Ramsey Nasr as Roark, Aus Grejdanus Jr. as an alternately repellent and sympathetic Keating, and Hans Kesting as Wynand, while Bart Slegers makes a fine, creepy Toohey. Among the striking visuals and stage effects, two stand out. The climactic explosion of a housing project (dynamited by Roark after his design is mangled by bureaucrats) feels truly shattering; the building’s façade is projected onto a backdrop screen, and its collapse generates a cloud of reddish dust and a gust of air that blows sheets of paper all over the stage. Moments later, the blood pooling around Dominique—who gets cut by glass while helping Roark—becomes a pool of red around Toohey’s white typewriter as he writes a piece denouncing Roark.

The Fountainhead’s too-short run ended at the BAM on Saturday. It would be a good candidate for a more extended run in New York. Perhaps this production, which has received excellent reviews in both Europe and America, will also turn out to be a step toward a new look at Rand as neither idol nor cartoon villain, but a flawed and fascinating cultural figure whose contributions still await mainstream discovery.