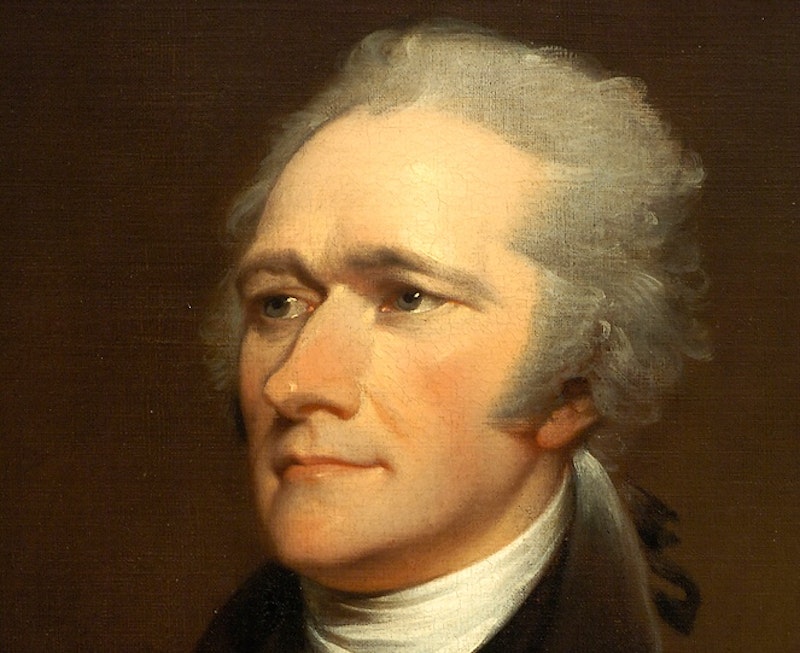 "You should be terrified that people who like Hamilton run our country,” blared a headline at Current Affairs. The author, Alex Nichols, hits all the anti-Hamilton talking points common in certain sections of Left Twitter. Hamilton is expensive to see and therefore elitist. Hamilton's diversity is "forced," and it's offensive to portray slaveholders like Jefferson as black. And most damning of all, the musical is "upbeat," presenting the Founding Fathers, and America itself, as noble and sympathetic, rather than engaging with the bleak reality of slavery, indigenous genocide, or class snobbery and oppression.

Nichols isn't exactly wrong. Hamilton, the musical, is far too kind to Hamilton, the historical figure and authoritarian jerk. But are the people who love the musical and/or the soundtrack simply dupes? Are the queer people of color who created the musical simply bourgeois shills? Is it always, in every way, politically retrograde to see something hopeful in America?

The book isn't just making a cheap bid for the expansive Hamilton fandom, though. Rather, the authors use their stories, and the Revolutionary War setting, as a way to riff on, and think about, the issues raised in the musical. Those issues specifically who gets to claim American history? Does this country belong to marginalized people, or as Trump would have it, are black people and queer people, and Jews outsiders to be mocked, deported, and subjugated? "Would Americans ever accept as one of them a Jew who didn't leave his Jewishness behind an adopt their ways? Would they accept him even if he did?" Nathan, an American spy, muses in Rose Lerner's Promised Land.

The answer in all three novels is, at least provisionally, "yes." Alexander Hamilton not only accepts Jews in his regiment at Yorktown, but he doesn't kick our heroine, Rachel, out of the army when he discovers that she's a woman disguised as a man. Hamilton may even be Jewish himself, the novella suggests—he did learn Hebrew as a child in the Caribbean, and no one is sure who his father was. Similarly, in Courtney Milan's The Pursuit Of…, Elizabeth Hamilton barely blinks when she encounters John and Henry, a mixed race homosexual couple who meet with her to relay stories of their time with Hamilton.

This isn't to say that Milan presents the Revolutionary colonies as an enlightened utopia. In her novel, John, an escaped slave who served in the Rhode Island militia, and Henry Laurens, a British deserter, journey from Yorktown north on foot, and they encounter plenty of prejudice as they go about the business of falling in love. John is accosted and threatened because he's black. More, he explains with some force to Henry that the American definition of freedom was never meant to include him. Henry is swept away by the eloquence of the Declaration of Independence, in part, it's suggested, because "all men are created equal" speaks to him as a gay man. But John disabuses him. "Thomas Jefferson owns people. He no more thinks that all men are equal than the King of England does. It's all just words." As with Hamilton the musical (according to Nichols), the vision of an egalitarian Founding is just smoke and mirrors and pretty stagecraft. It's meant to bamboozle, not to bring about justice.

At the same time, though, Milan suggests that the vision can have unexpected power. "An ideal set in motion is a dangerous thing. You can't control who believes it, or whether they take it to heart," Henry says. Jefferson may not have meant black people to be equal, but his words provide a springboard for Henry, at least, to reconsider his prejudices and presuppositions.

Hamilton's Battalion is intended, in a similar way, to get readers to re-think their own assumptions about who owns and gets to use American history. In her novella, That Could Be Enough, Alyssa Cole tells the story of Andromeda Stiel, a black, lesbian dressmaker with a successful business. Elizabeth Hamilton's eagerness to help her own black servant, Mercy, find happiness with Andromeda is a little hard to believe, perhaps. But in her endnote, Cole warns against the assumption that prejudice in the past was either universal or determinative. "Mercy and Andromeda are queer, and they live together and are accepted by their community," Cole writes. "I wanted to make it clear that this is not anachronism in the name of happily ever after: queer people have always existed, and though society has generally excelled at making their lives difficult and dangerous, there were people who lived as openly as they could and were accepted within their communities."

Cole's mention of "happily ever after" is pointed. Romance novels are often denigrated for their happy endings; joy and optimism are seen as politically unserious and as reinforcing the status quo. To promote change, supposedly, we have to agree that the current moment is a dismal dystopia. To suggest that anyone is happy, or intimate that anything about America is good, is to erase the real suffering of others and to apologize for the status quo. The left must embrace misery all day every day or betray itself.

Lerner, Milan, and Cole reject that analysis. All of them are very aware of the position of marginalized people in a post-Trump (and for that matter pre-Trump) world. All of them are aware of the (catastrophic) failings of the Founding Fathers. But they also respond to Hamilton's hope. Yes, the Founding Fathers were not black. But perhaps there is part of their vision, or part of America, that black people, and queer people, and Jewish people can claim. People like Nichols seem to think that righteous anger is the only force for change. But Hamilton's Battalion shows that hope, joy, love and romance are revolutionary, too.