How not to be responsible with great power. 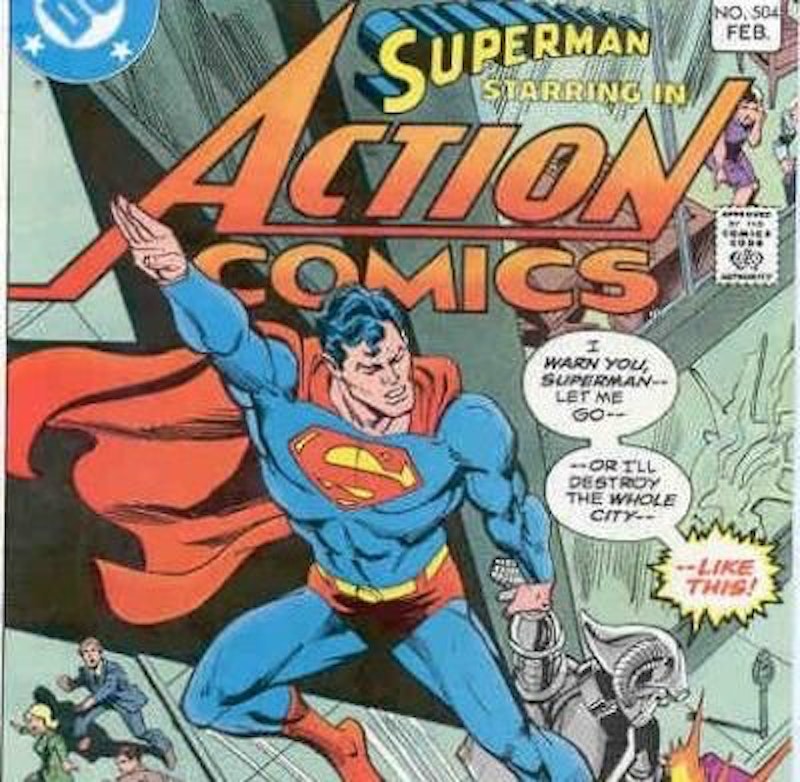 This is the first in a series of posts rereading comics from my childhood.

"The Power and the Choice!"

If you're a comics fan, the title "The Power and the Choice!" instantly calls to mind one of the most famous Stan Lee aphorisms, "With great power comes great responsibility!" And, sure enough, this Curt Swan era Superman story is a meditation on the responsibilities of power—though a meditation with an odd lack of urgency. Stan Lee and Steve Ditko's original Spider-Man comic was suffused with angst, guilt and a neurotic terror of failing at manliness. "The Power and the Choice!" in contrast is about how Superman will take care of everything, as long as you stay away from brunettes in slit skirts.

The plot starts with Superman investigating a break in at a jewel expo (supervillains tended to go after money rather than world domination back then.) The perpetrator is a figure in a lead-lined suit with some sort of energy blast power. The supervillain escapes, but later on the street Clark Kent is saved from falling masonry by a guy named Toby Williams, who has energy powers similar to those of the jewel thief. Clark is oddly oblivious to the possibility that this could be the bad guy, but luckily for the continued forward movement of the narrative, Toby phones him later and asks to speak to his buddy Superman.

Toby then confesses he was given superpowers by the spirit of his father, who crash-landed years ago in Tibet and was taken in by super-monks, just like Dr. Strange, Iron Fist and all those other Westerners traveling to the East for fame and fortune and Prana Power. Toby didn't want the powers, though, so he was thrilled to meet Sheila, a skilled hypnotist who made him forget he could blast masonry to pieces. But! Sheila wears sexy slit skirts and is therefore evil; she’s been hypnotizing Toby to give her Prana Power so she can rob banks. She made Toby lie to Superman, but Superman knows and sees all and figures it out and foils her schemes. Superman then uses super-hypnotism to make Toby forget he has superpowers forever. "Now, hopefully, Toby Williams will get the normal life he's been deprives lately—something a Superman can never have—no matter how much he might sometimes desperately want it!" our hero thinks as he whooshes up into the air.

Toby, then, is a superhero who doesn't want to be one—and, predictably, the superhero comic is uncertain how to deal with him. In terms of the action of the comic, his refusal to become Super Prana is both disastrous and emasculating. Toby wants to get married and have kids rather than run around and have adventures, he says—a wimpy, shirking stance that quickly leads to him becoming the "slave" to a scheming femme fatale. If you're not the heroic in-control hero wielding your patriarchal Prana for good, then you're a feminized dupe, in thrall to some black widow who vacuums up your eldritch energies.

Castrated Toby's fate would be dire—if it weren't for Superman! Interestingly, Toby's one superfeat, rescuing Clark Kent from falling masonry, is completely unnecessary, since Clark as Superman was going to prevent the masonry from hurting anyone. Typical of the Silver Age, Superman's powers in the comic are preposterous in their proliferating omnipotence; he can stop his own heartbeat, blow masonry around with superbreath, and trace telephone calls through the phone lines. He can break Toby out of a hypnotic fugue and then put him under again by using superhypnotism and a super-rotating ashtray. Why do you need some other new superhero when Superman is already there? Even if he decided to take up his father's mantle and fight jewels thieves, Toby would be superfluous.

The resolution of the comic has Toby granting Superman (temporary) Prana powers. Then Superman hypnotizes Toby to forget his powers, just as Sheila had hypnotized him before. Superman, in short, doesn't just defeat the evil Sheila; he takes her place. The Prana powers from Toby's father are swiped from the evil feminine adversary and returned to a rightful masculine heir, while Toby's mind is righted by a Superman. The nasty noir, in which the hero is undone by a woman, has a happy ending because Superman is there to put masculinity back in its place.

Toby can go off and be a medical researcher and have a family because Superman is on the ramparts, doing the lonely work of busting jewel thieves and punching controlling women. Spider-Man, created by objectivist individualist libertarian Steve Ditko, insists that every man be responsible for law and order himself. This random Superman story from 1980, though, has more faith in the structure of patriarchy. The authorities know all see all; Superman traces phone calls, sneaks X-ray vision peeks at Toby's wallet, and tracks Sheila by her heartbeat. Then he erases Toby's memory for his own good. He's a superspy who magically controls public perception. It's like he's J. Edgar Hoover wearing long johns.

Some superhero stories promise you the chance to become the big daddy saving everyone. But The Power and The Choice! is for all those kids who don't want to have adventures and superpowers. Don't worry, the comic says. Someone is out there to protect the banks and discipline the women. Even if you don't want to be a masculine patriarch, you can rest well in the knowledge that the masculine patriarchy is nonetheless grinding on for you.