The Passion of Tommy Wiseau

James Franco crushed dreams when he blocked Tommy Wiseau at the Golden Globes. 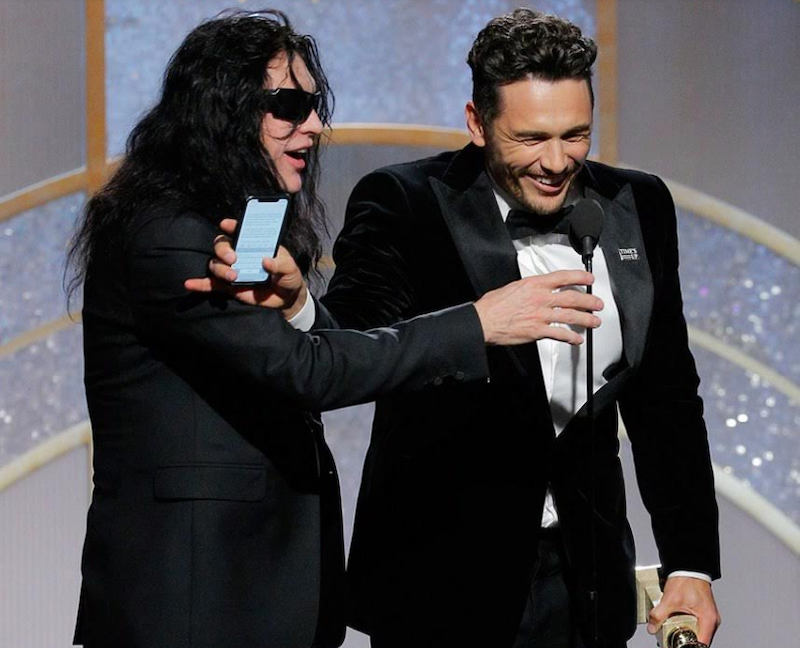 When reviewing The Disaster Artist last month, I wrote that the only thing that could top last year’s Moonlight/La La Land Best Picture snafu would be if James Franco gets nominated for playing Tommy Wiseau (auteur of The Room), brings Tommy to the ceremony, wins, brings Tommy on stage, then gives him the Oscar and lets him give the speech. These are pie in the sky hopes apparently, since Gary Oldman is poised to win for wearing a fat suit and smoking so many cigars he got nicotine poisoning.

That movie—Darkest Hour, where Oldman plays Winston Churchill—sucked, unlike The Disaster Artist, which was surprisingly accessible for people who’ve never seen The Room. Early footage of Franco’s take on Tommy looked dire, but I thought he came close to nailing it, and was encouraged by Franco’s apparent good will in bringing Tommy along for the whole promotional tour: they went on Howard Stern, Jimmy Kimmel, and screenings all over the country together. An unlikely awards campaign started for a movie that looked like it might bomb and sink into the kind of oblivion that The Room was meant for and escaped by the grace of God.

On Sunday, Franco won Best Actor in a Musical/Comedy at the Golden Globes for his performance in The Disaster Artist. By the time Franco and his brother Dave made it to the stage, Tommy was already racing up from the left, as Franco began his acceptance speech with, “First person I have to thank is the man himself, Tommy Wiseau! Come on up here, Tommy!” Franco tried to continue on with his speech, but as Tommy reached the stage, he got an applause break. He went right for the mic, but Franco crushed his dreams and everyone else’s by shoving him aside: “Whoa whoa whoa whoa whoa whoa!”

He went on for another minute, at times doing his impression of Tommy, and I get it, it’s his movie and his performance being recognized, but come on. At least give the actual insane person some airtime, some real unrehearsed gold from a true original. I doubt Franco will win again at the Oscars, and there’s no other scenario where Wiseau would end up on stage at any other major awards show, so Franco brought us so close to something beautiful and unexpected only to swat it away for the boring and the conventional.

But what a bizarre person to feel such sympathy for, especially on that night with a room full of black dresses and #TimesUp pins. The Room is a pretty misogynistic movie full of retrograde 1950s ideas and behavior, where typical patriarchal paranoia is realized with the character of Lisa, a woman who actually is plotting behind her boyfriend’s back and sleeping with his best friend. He’s the martyr in both movies, despite his rude and borderline abusive behavior on set. Another strange thing about The Disaster Artist (and to a lesser extent, The Room itself) is that 80 percent of the humor comes from Tommy’s bizarre accent, malapropisms, and skewed and inscrutable vision of Americana. If anyone knew where Tommy was actually from, The Disaster Artist could never have been made: it’d get compared to Borat, easy “punching-down” mocking of foreigners and their difficulty assimilating in America.

But because Tommy is independently wealthy and has been coy and cagey about his age and country of origin for decades now, we laugh without consequence. A headline from The Hard Times (sorry) sums it up: “Tommy Wiseau Being Played by a White Guy Is Offensive to Whatever Alien Species He Is.”

So despite the fact that Tommy acted like a tyrant on set, made female actors uncomfortable, and that his own biopic leans heavily on “guy with funny accent,” the man got an applause break at the Golden Globes on #MeToo night. That’s pretty extraordinary, and it shows that our desire to see an underdog and a true outsider succeed against absurd odds blots out our duty to keep the moral policing beat.

Tommy Wiseau on stage at the Golden Globes is of a piece with the grand narrative of The Room and The Disaster Artist, a portrait of a man desperate to succeed and be accepted into his own vision of what Hollywood is, and in the most roundabout ways, manages to become an American icon. If Franco gave Tommy just 10 seconds, I wouldn’t be writing this. But he burnt up all the good will he’d stored up from this movie and it won’t last, if Twitter reports about his bad behavior coming to light soon prove to be true.

Wiseau was interviewed on a local news segment in Los Angeles the day after, and one of the hosts asked him what he wanted to say if Franco hadn’t “blocked” him. “I was just going to say: If a lot of people loved each other, the world would be a better place to live. The American Dream is alive, it’s real, and I’m American, I’m proud of The Room, etcetera… nice thing! But as you noticed, somebody was like ‘nooo, you cannot do this.’”

But you can. We all can. You just have to believe in yourself. Cue the music.