Tarzan, Lord of the Junk

A sort of cheer for a comic freed from convention and quality. 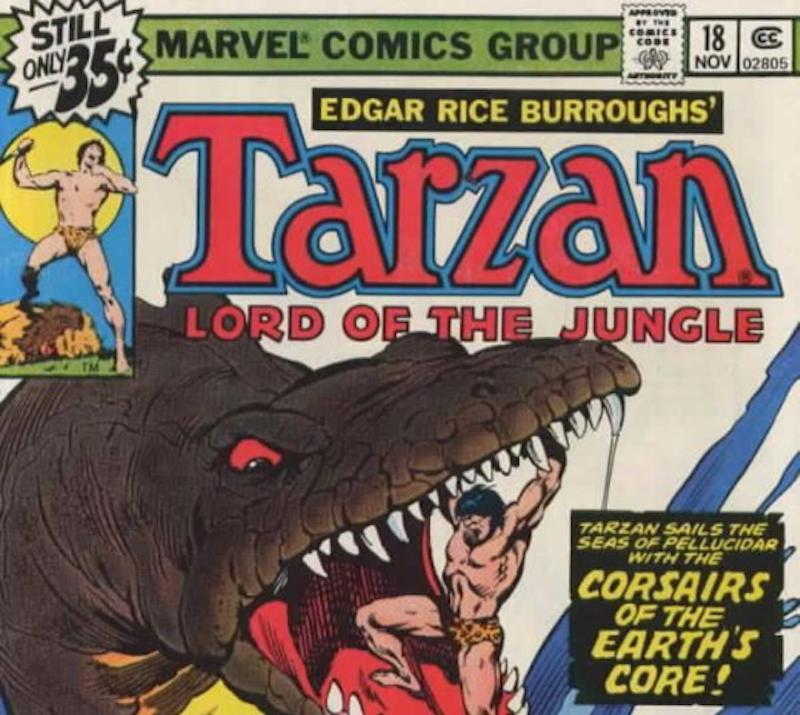 This is part of a series of posts rereading comics from my childhood. The last one on The X-Men is here.

Tarzan: Lord of the Jungle #18

I have no idea why I purchased this Tarzan comic, and on re-reading, it’s clear that the writer and artist had little idea why they created it. The story is a rambling concussed agglomeration of tropes, with plotlines that slither and stagger and lose direction and lunch alike in some sad blind alley of cliché and confusion. Yet there's a kind of joy. The fact that no one’s even pretending to try gives the narrative a vertiginous anything-goes B-movie air. Let’s draw a giant red-eyed dinosaur on the cover about to devour Tarzan with the water splattering in Ab-Ex blots and a boat shattering like a Moby Dick pastiche—why not? Clearly no one in editorial is looking and no one is buying the copy except that weird eight-year-old Noah Berlatsky; do whatever you want.

The cover is probably the high point of the issue, but it does accurately reflect the contents. The plot is a nonsensical mélange of pulp bunged together because they look vaguely cool or because no one could be bothered to un-bung them. The comic is set in someplace called Pellucidar, which may (?) be an island. The plot starts off with Princess Ayesha escaping with a guy from someone called the Mad Arab, a mightily muscled early-20th century pulp villain attended by evil Germans henchmen. But then the story abandons her and returns to Tarzan, who has fallen in with pirates out of some 1800s Treasure Island riff. There're also cannibals who inevitably see the Mad Arab as a God, and dinosaur like creatures, including a flying pterodactylish thing and that sea-lizard from the cover.

The pirate vs. evil Arab vs. cannibal vs. dinosaur collage is gloriously preposterous, more so because scriptwriter David Kraft barely tries to make sense of it. There's little effort to bring readers up to speed; I’ve no idea who Princess Ayesha should be or why I should care about her. Tarzan declares furiously that he wants revenge on the Mad Arab, and the Mad Arab babbles about wanting to kill Tarzan, but no one explains why they hate each other. Tarzan's the good guy; the Mad Arab is the bad guy; that's enough, I suppose—even though they never actually come face-to-face in the issue. Instead, we get an extended sequence where the Mad Arab threatens to kill one of his German henchmen. This is treated like a major cliffhanger (the Mad Arab dangles the guy over a cliff) even though it's a matter of indifference whether the stock henchman dude dies or not.

When you've got a random assemblage of pulp tropes, racism inevitably goes along with it. There are feral, barely human, Neanderthal-like cannibals screaming, "More white skins! Kill them!" in scraggly speech bubbles that suggest guttural grunts or evil devil languages. There's the Mad Arab himself, wearing a flowing keffiyah with his face shrouded in shadow because when you're a Mad Arab the shadows just magically cover your face. There are, weirdly, the Germans, who are portrayed as brutal and simian in a weird throwback to US anti-German WW I propaganda. Tarzan, in his ridiculous leopard-print shorts and Ayesha straining and posing in her bikini embody sexualized savagery—though, as always, Tarzan's sexualized savage superpower is that he's a white guy. He even announces that he "will be master" at one point, which is more revealing about the comics' racial dynamics than the creators intended.

The racist themes are so scrambled together and casual that it's hard to see much conscious animosity—or for that matter, much consciousness. The comic makes the Claremont/Byrne X-Men look like Ulysses, and Captain Carrot and His Amazing Zoo Crew look like Animal Farm.

The lack of pretense to aesthetic merit, or even minimal coherence, has its own appeal, admittedly. The comic becomes a kind of avant-garde project; you could scramble the pages at random and it would still make about as much sense. Every panel almost seems like it should be a Lichtenstein painting. "Kreegah! It is them—the men on whom I seek revenge!" Tarzan declares in ultra-close-up, with Buscema and inker Klaus Janson rendering his eyebrows as bushy, flaring, almost quivering lines, his teeth gritted, his cleft chin throbbing with virile cross-hatching. He seems energized by the nonsense he’s spouting. Dropped into nowhere, Tarzan raises his face to the confused readers staring down upon him, and barks his barbaric bullshit to the skies.