The Case Against Liberal Uncle Humor

We have to do better. 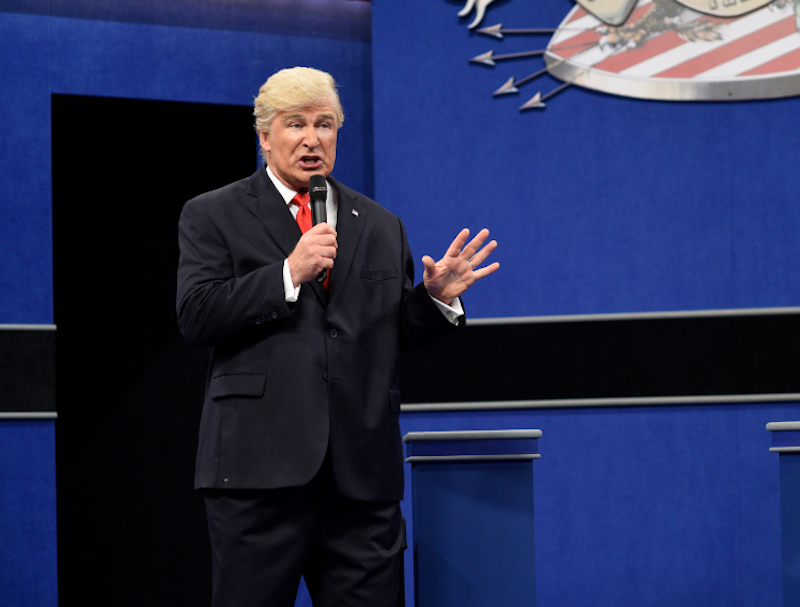 In the first year of the Trump Administration, much has been written and said about the role comedians have played, and will play, in the opposition to Trump and his presidency. It was thought at one point that the Trump Era would lend itself naturally to comedy, but it hasn’t worked out that way.

Partly, a lot of what’s going on isn’t funny. And when Trump is funny, it’s not easy to parody. From Steve Bannon to Anthony Scaramucci to Omarosa, the clashes of reality TV-style personalities, illustrated on a semi-weekly basis in timely news accounts, is funny enough on its own, without even requiring the interpretation of comedians, which is to say nothing of Trump’s behavior itself.

Patton Oswalt, in a trenchant New York magazine piece on “Our Year of Bad Donald Trump jokes,” compared Trump’s presidency to the prospect of trying to tell a joke about “an insane man on the sidewalk, just shitting on the sidewalk and yelling about Hitler.” No joke could possibly improve on that.

Meanwhile, a lot of the more important Trump-era moments involving comedians, from Jimmy Kimmel and his baby son to explainer-style bits from the likes of John Oliver and Seth Meyers, has involved advocacy first and comedy second. But there’s another style of humor that’s gained purchase: the not-very-funny kind. I call it Liberal Uncle Humor. They’re not dad jokes, they’re worse: Uncle jokes. Your conservative uncles might go on Facebook every day and share conspiracy theories and racist memes. But it’s your liberal uncles who share something arguably even more horrifying: Andy Borowitz columns.

Liberal Uncle Humor is, above else, weak-sauce jokes that aren’t the slightest bit biting. And the king of this style is Borowitz, the TV writer-turned-“humorist” who over the last decade has built a major beat at The New Yorker out of Onion-style headlines that are either bad jokes (“Broad Majority of Americans Support Moving Trump to Jerusalem”) or not jokes at all (“Trump Voters Celebrate Massive Tax Cuts For Everyone But Them.”)

Borowitz is, for some reason, wildly popular. Everything he writes gets huge clicks, and his work frequently outflanks that of his colleagues, some of the best reporters and journalists in the country, on The New Yorker’s “Most Popular” list.

A news event will happen, and people on Twitter will make different versions of the same joke. Then, the next morning, Borowitz will have a headline out with the worst possible version of that joke. The night Roy Moore lost the election in Alabama, Twitter was stuffed with very funny mall-related cracks. Borowitz went with “Devastated Roy Moore Consoles Himself By Heading to Mall,” which was shared by dozens of my friends.

But it’s not just Borowitz. “Yuge” references stopped being funny in the early-1990s, ditto for “Cheeto” jokes. “Covfefe” was funny until the next morning; “Dotard” never was in the first place. And don’t get me started on “Drumpf,” or anyone who still calls him that to this day. I like John Oliver, but he has a lot to answer for that.

Also, with the exception of Anthony Atamanuik’s work on Comedy Central’s The President Show, there’s no one doing even a passable regular impression of the President, and that includes Alec Baldwin, whose version of the character has been on autopilot.

So who’s actually doing funny, effective, biting satire and comedy about Trump? Clickhole, and its spinoff site PatriotHole, have been on top of their game all year. Alexandra Petri’s satirical columns in The Washington Post are consistently hilarious, while Benjamin Hart, now of New York magazine, has written a couple of brilliant parodies of the ubiquitous Trump Country deep dive pieces and the White House palace intrigue tick-tocks. Then there’s Café.com’s outstanding Lil’ Alex Jones series.

Kate McKinnon’s take on Jeff Sessions is a revelation, and right up there with Melissa McCarthy’s Sean Spicer. The best political impression of the Trump era, though, is James Adomian’s Bond villain gloss on former White House aide Sebastian Gorka, one I can barely even think about without collapsing into laughter. And while Patton Oswalt’s recent Netflix special, Annihilation, drew most of its attention due to the heartbreaking way he handled the topic of his wife’s passing, the Trump jokes in the special’s first half were first-rate too.

I understand wanting to get through Trump’s tenure with humor. But I ask this of people I’m close with who are invested in opposing Trump: Ask more of comedians, and expect more of them.