Gary Oldman poisoned himself for a crummy movie. 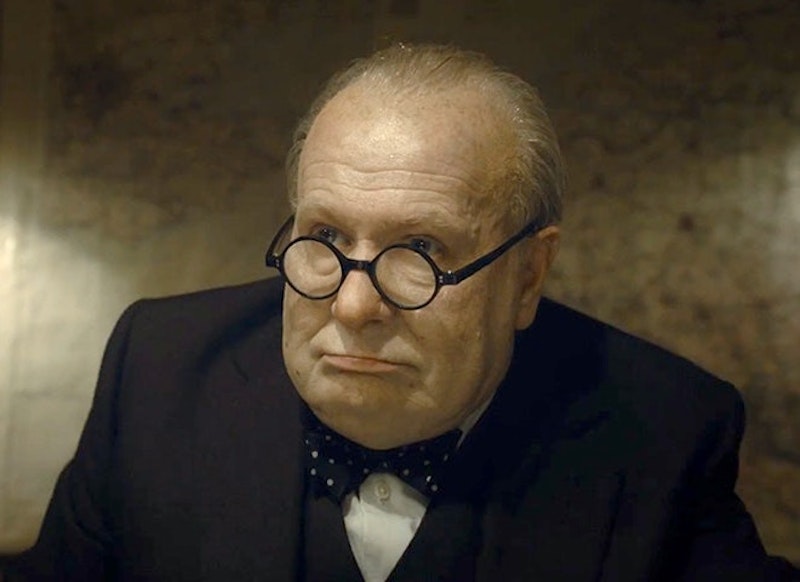 Method actors need to relax. I haven’t seen Phantom Thread yet, and I’m sure those years spent studying cobbling in Italy served Daniel Day-Lewis just fine for Paul Thomas Anderson’s new movie, but the retirement announcement? Oh, please. He’ll be back in 10 years or whenever he gets bone cancer so he can give one last go at topping everyone and actually die on film.

Meanwhile, someone told me over the weekend that Jesse Eisenberg is “method.” Excuse me? Dude is the same semi-sociopath weirdo nerd in every single movie he’s in, whether it’s set in 1920s Hollywood, 1970s New York, the Midwest in 1996, modern day Oregon, or the DC Comics extended universe. Is he practicing the placebo method? At least Gary Oldman commits: during filming for Darkest Hour, a new Winston Churchill movie where Oldman plays the surly, fat Prime Minister in 1940, he reportedly got nicotine poisoning after smoking $20,000 worth of cigars. That… doesn’t seem necessary. Especially since the movie was a dog. Fine as anonymous holiday fodder, but worth a fat suit and an extremely embarrassing trip to the emergency room? Absolutely not.

Darkest Hour is a nothing of a movie: an unremarkable script rendered by unremarkable direction and supported by unremarkable and unmemorable players. It revolves around Gary Oldman as Winston Churchill. I don’t know when people were actually awed by an actor’s commitment to a role that it would factor into the advertising—maybe Christian Bale circa The Machinist—but that fact alone is not only insufficient to support an entire movie, it’s enormously insulting to the audience and blindingly narcissistic on the actor’s part.

There’s a world of difference between Robert De Niro’s career watershed performance as Jake LaMotta in Raging Bull or even Daniel Day-Lewis in There Will Be Blood and the fat incoherent buffoon that Oldman has put up onto the screen in Darkest Hour. This movie should be barred from all award considerations. It’s not a movie; it’s a screen test, a very expensive two-hour audition reel from a very accomplished actor who probably should think twice about actually smoking on the sets of period pieces.

“I got serious nicotine poisoning… You’d have a cigar that was three-quarters smoked and you’d light it up, and then over the course of a couple of takes, it would go down, and then the prop man would replenish me with a new cigar—we were doing that for 10 or 12 takes a scene.” Oldman went through 400 cigars in a 48-day shoot. Joe Wright directed Darkest Hour, which is a drag, because I loved his 2007 film Atonement, not at all the stylistic antiseptic procedural period piece that this one is. Atonement didn’t depend on one performance or one set piece, one character or event: it was an impressionistic, moving, often haunting hallucinatory journey through the trauma of World War II.

Yet Wright, speaking of Darkest Hour, is quoted as saying that “It’s Winston Churchill. You can’t have Winston Churchill without a cigar.” Did you run out of fake ones? Oldman’s convenient love of nicotine is only the most ridiculous and over the top example of his method’s utter lack of necessity here—why go all the way if you have nothing to work with? Do another John le Carré adaptation and try real bullets for a change. It might be fun.