A futile thumbs-down to Uber. 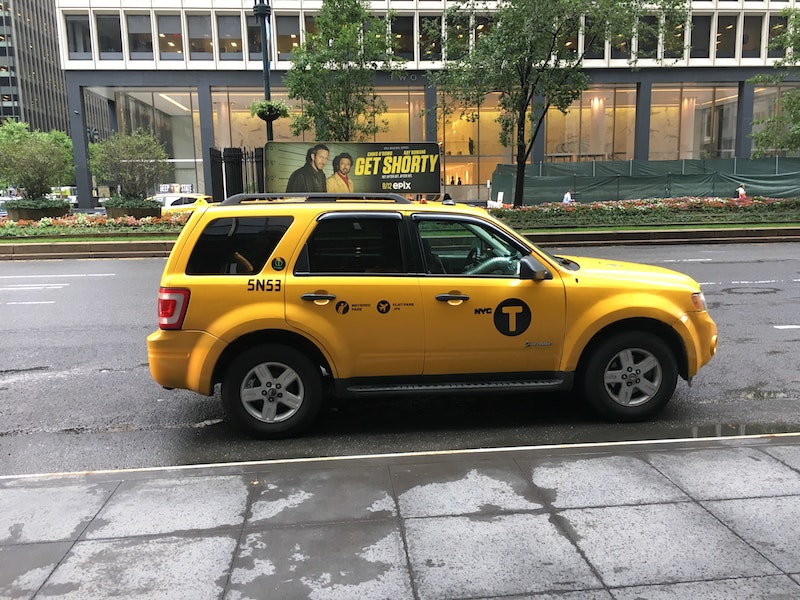 When was the last time I drove a car? Must’ve been February of 1977, when in an attempt to make some cash, I took the wheel of a van at three a.m. and dropped off the flats of the Hopkins News-Letter in Westminster, MD. (This was after I was editor of that paper, a few months before starting Baltimore’s City Paper, and just back from a semester off to work in Denver.) It was a disaster, as my friend at the time, Studebaker Hawk, pointed out to a colleague when he thought I was out of earshot, not knowing that my hearing verges on the supernatural. “Russ is great at paste-up,” Hawk said, "but he’s a disaster on the road.” I got the message, and haven’t terrorized other motorists ever since.

As a kid, growing up in the New York suburbs, I never took a taxicab, which was a foreign concept. I rode a bike, then the family car, and when in Manhattan always walked or took the subway (which my brother Jeff, a regular rider, referred to as “the human sewer”). In Baltimore, it was feet or the bus, which was far more dependable than today (or so I’m told by the old-timers outside my current office, where they’ll rant on and on about how the MTA’s gone to the dogs). On a few occasions, when flat-broke, I dropped 50 pennies into the slot machine of the bus, much to the consternation of the driver and passengers behind me. And one time, riding the bus uptown at eight a.m., much worse for wear after staying out until four with my friend Peter Koper, two high school girls, put off by the sour smell of beer and bourbon I apparently emitted, broke into a chorus of “How Dry I Am.” Christ, that was embarrassing.

In any case, a few years later I was able to ditch the bus and either hail or call for a cab to transport me to work. Still remember the number of Sun Cab: 235-0300, no area code needed for local calls. It became part of a routine, like picking up the newspaper at a corner newsstand or buying a couple of coffees at a Muhly’s Bakery. In 1986, at my oldest brother’s house for Thanksgiving in Short Hill, NJ, time was running short to board an Amtrak at Newark, and, since a smashing time was had by all, my brother said, “Skip the train, I’ll get a cab to bring you back to Baltimore,” which was a three-hour drive. He gave me a wad of bills and I went in style. My friend Jim Larkin, co-founder of the New Times chain of weekly newspapers, was flabbergasted at the extravagance, and, as a Westerner, the sheer weirdness of it all, and loved telling the story to mutual friends. A year later, when Larkin and I met up at a Dublin pub, he couldn’t resist informing a befuddled bartender of that ride.

Skipping to the present, I’m not embarrassed or proud that I’ve never taken an Uber car, which is apparently unusual (save for my son Nicky, 25, who hates Uber for any number of reasons, which he’s written about). It’s a losing battle, obviously, since Uber/Lyft is decimating the taxicab industry, and although I’m no stranger to onetime institutions and customs fading into obscurity—newspapers, manners, suits and ties, shoeshine stands, a USPS that didn’t regularly lose your mail, saying “thank you” to a cashier and so on—the cabbie’s fast and sure disappearance does take me aback.

Just last week, an old friend arrived at my home, a cabbie I hadn’t seen in perhaps two years, and I asked where he’d been. Ahmed’s a terrific fellow, an immigrant I’ve known since 2004, and he gave me a rundown of what’s happening here in Baltimore (and of course other cities as well). Uber’s captured the corporate accounts that many of his former customers now take as perk, and the ranks of his colleagues have thinned dramatically. “I picked up your son the other day in Waverly,” Ahmed said, and reminisced about how he’d drive the boys and I to Fells Point, Camden Yards, Towson, etc. years ago, and watched them grow up. He asked after my younger son Booker, and inquired about how liked New York, where he now works in midtown. He said, and I’ve no way to verify this, that the cost of the onetime prized taxi medallion has fallen here from $50,000 to a mere grand. Could be an exaggeration, but probably not by much.

Outside of New York, the habitual taxi customer is somewhat rare since almost everyone drives (unless they’re out drinking, and then need transportation, almost always an Uber now). But it’s a loyal bunch—or was—and it’s dismaying that so many men (and occasionally women) are having their livelihoods ripped to shreds. I’m not conferring sainthood on cabbies as a whole, since I’ve had run-ins with assholes many times, usually guys who jack up the meter or take the “scenic route” as if you’re a tourist, but on the whole these are people who work 14-16 hours a day, in often dangerous circumstances, send money to relatives back home, and do everything in their power to help their children get a proper education. Sometimes their relatives operate bodegas, another sketchy line of work, but one that can lift the family’s fortunes. Those corner retail outlets are disappearing as well.

Pardon the corniness, but it was once called The American Dream. Scratch that: the Xenophobia that’s poisoned a large percentage of this country’s populace, inflamed most viciously by Trump and the current Republican Party at the moment, but also tacitly endorsed by many Democrats, is, at least to me, the most distressing aspect of today’s “culture wars.”