Perceptions of Reality in How TV Ruined Your Life

Some of Brooker's ideas can be followed like trails into recent quandaries. 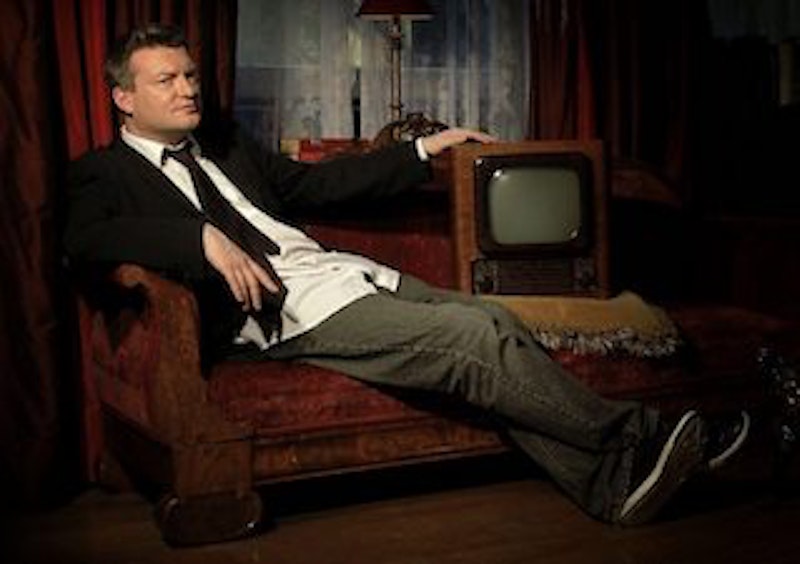 Most Americans know British TV personality Charlie Brooker as the creator of Black Mirror. I was first introduced to him when clips of another show he’d done circulated on Facebook, 2011's How TV Ruined Your Life, and I'm still struck by its insights. In its six-episode run, Brooker skewered the evolving nature of television and the intimate relationship it’s built with the audience, while remaining aware of the irony of decrying the very medium he's appearing on: "I'm 39 and arguing with the television."

How TV Ruined Your Life was an offshoot mini-series of Brooker's Screenwipe, a clip show where the host narrated from a living room set before a television and laptop, skewering the political and cultural events of the week. How TV Ruined Your Life follows the same format, and focuses on a series of broad topics, rather than crazy stuff that happened recently. Brooker digs deep into the cultural schism between fantasy and reality, and how we've arrived at a persistent state of middle class malaise.

If there's a core argument to be found, it's that television ruined our lives by finding new ways to infantilize and manipulate the audience. The news fails to be very good at informing us because it's too busy panicking and "giving your fear cells a tickle." Television producers and advertisers are adept at "the business of targeting different age groups very seriously, and it's a process that begins early on, from the moment you first emerge blinking and shrieking from the womb." Advertisers in particular, couldn't have us "thinking their stuff is just stuff," and began selling aspirational lifestyles to match the products: "Buy this MacGuffin, and you too can be one of the fortunate happy ones."

The show hits its stride with the second episode, "The Lifecycle," where Brooker argues "Television ruined your life by ruining each stage of your life." Because of television's demographic hyper-focus, culture has become a demented cult of youth worship. The programming for young children maintains a visage of the educational, but the reality is that it's "about as effective as rubbing a dictionary on your baby's head." As children get older, shows aimed at them are more centered on selling celebrity as a desirable and attainable lifestyle. For young adults with a disposable income, TV is eager to pander to the lowest common denominator. Parents, especially fathers, are depicted as "tragic, shuffling individuals," while the elderly, who watch more television than any other group, "see themselves being sidelined and belittled." Brooker's own solution, as a television presenter himself, is "I think when I'm 80, I'd like to watch young people being kicked into the sea."

The two finest episodes are on "Aspiration" and "Love," where Brooker spells out the ways television can and will turn anything into a status symbol, even love and family life. To be clear, Brooker isn't just tearing into consumerism, even if he can't resist circling back to it. When he talks about the way that television and media mislead on the nature of love, it's to tell us that we're set up for failure, especially in selling the idiotic notion of a soulmate, "The thought that out of the many millions of people in the world, there's only one that truly belongs with you... Of course, for this to be true, there would have to be a celestial department of destiny whose job it is to pair people off like producers on a reality show."

After citing statistics that argue much of our romantic knowledge comes from television and almost nowhere else, Brooker suggests that beyond selling the audience on the soul mate idea, "Television has warped your notions of physical beauty by parading inordinately attractive people in front of you, morning, noon, and night, thus raising your expectations to unsustainable heights while simultaneously making you feel inferior... attractive people are presented as tantalizing prizes, they float through the world almost like angels, drawing admiring glances wherever they go. And unless you look like that, which statistically, you probably don't, the unmistakable conclusion is that you don't measure up."

It's a familiar trope that television characters often lead lifestyles that are more lavish than they can actually afford, but Brooker makes the case that it's by design: "Of course we all want nice houses, but thanks to aspirational TV, everyone wants what's out of reach." Over a montage of clips from Sex and the City and Gossip Girl, aspirational television is defined as "a world in which the majority are thin, attractive, witty, sassy, cool, fun-loving, thoughtful, and happy, and enjoy a life of cocktails, dick, and shoes."

There are a few sub-categories of television that emerge as constant punching bags in nearly every episode: soap operas, and both home and personal makeover shows. Brooker cites shows like Dallas as giving life to aspirational television, as well as its British counterpart, Howards' Way. Dallas' oil tycoon, J.R. Ewing, was sold as the villain you loved to hate, but by the time the Apprenticeemerged, the audience was expected to blindly love the tycoon. In a terrific spoof of the Apprentice, a fictional tycoon dresses down a pair of children for their inability to turn a profit at their ginger beer stand. After sacking the children, the tycoon demands they "send in your parents, I'll have them both strangled."

Soap operas emerge again to tell us how they've ruined our view of long-term relationships. Many soaps aim to get their couples to the altar, but over the course of several seasons, they must engage in weird breakup and makeup rituals where "it's not quite perfect and so they must part with as much wounded nobility as possible." Because so many shows and movies end at the point of consummation, "when long-term couples are portrayed, they tend to either be seen as sexless, winsome twosomes... or warring partners who apparently despise one another [and] whose mutual hatred is played for laughs."

Personal makeover shows are ridiculed for their inherent cruelty, where contestants are mocked for "not being televisual enough," and not acceptable to society until they're given a new wardrobe and been "zapped by a face-nicefying laser." Describing home makeover shows as "envy generators," Brooker also tears into home tour shows like MTV's Cribs where "a very rich person shows you the reward which society has granted them for being successful and loved and you have to guess who in God's tit they are."

Wrestling with the existential dilemma of “what one is meant to do with a house? start a family?" Brooker puts our culture of child worship under the microscope, where parents are so paranoid for their children's safety, they've locked them inside with the television, where they can grow up under the influence of mindless celebrity idolatry. The emergent result are shows like My Super Sweet Sixteen, where teenagers celebrate their continued existence by mimicking Hollywood red carpet events. The next step is Teen Cribs, where the worship of children and tycoons merges into worship the children of tycoons, and aspiration becomes farce: "How are you meant to aspire to be someone's child?”

In the final episodes on "Progress" and "Knowledge," Brooker examines the role television has played in our conflicted relationships with technology and our growing lack of enlightenment. Initially, humans have been prone to distrust new inventions and scientific advances, and the television machine itself was regarded as "an unfamiliar intruder that squatted in the corner of the living room demanding the entire family shut up and stare at it." While the Space Race pushed technology forward by leaps and bounds, we've reached a point where the progress has outpaced our stupid monkey brains: "It's like 'Invasion of the Gleaming Rectangles!' Pop a screen in our eye line, and no matter what we're doing, we'll be hopelessly drawn to the light. Never mind apes, we must be descended from moths."

Television found a way to merge with the technology, creating shows like Big Brother," a reality show in which you watched humans walking around inside a little house and used your phone to proclaim which of them you found least objectionable." Brooker argues that this has bled into a change of how viewers respond: "It's an illusion of choice... because there's a million different idiot hands steering the ship. But it's contributed to a culture in which people feel a vague sense of permanent outrage that they can automatically control world events by texting in, that no matter how many times you jab those buttons, you can't vote all this unpleasantness off the bloody news."

Technology has advanced the level of fakery that entertainment can engage in. While we expect Game of Thrones or a Star Trek spin-off to contain special effects, even mundane detective shows are filmed on green screen sets with backgrounds to be filled in later. Brooker also chastises those same shows for exaggerating the technology: "CSIis set in the present day, but demonstrates technology from space year 3000, yet no one thinks its sci-fi." This results in what has been dubbed the "CSI effect," where a growing number of jurors are demanding forensic evidence that doesn't exist.

An argument can be the CSI effect exists because television has deluded us into believing that we're smarter than we actually are. Where television once went to Shakespeare and Dickens for historical dramas, and academics for actual science and history, the emergence of "edutainment" is centered more on entertaining the audience than on educating them: "All TV really taught us was to believe what screens said, even when they were lying. TV's relationship with information has taken fact on a lengthy and unusual journey... Our taste for experts shifted from knowledgeable, respectable academics to tit-witted celebrity puppets."

Despite airing seven years ago, How TV Ruined Your Life holds up as a recent artifact. The shadow of the Great Recession looms in Brooker's analysis, where he tries to answer the eternal question of "How did we get here?" by considering that the pop culture we love is actually our enemy. Some of his ideas can be followed like trails into recent politics or social media quandaries. Some psychologists have argued that television has usurped religion's influence in our lives, and can alter our perceptions of reality. And that is truly the way television ruins our lives.