Tiny Homes Offer an Escape From the Treadmill 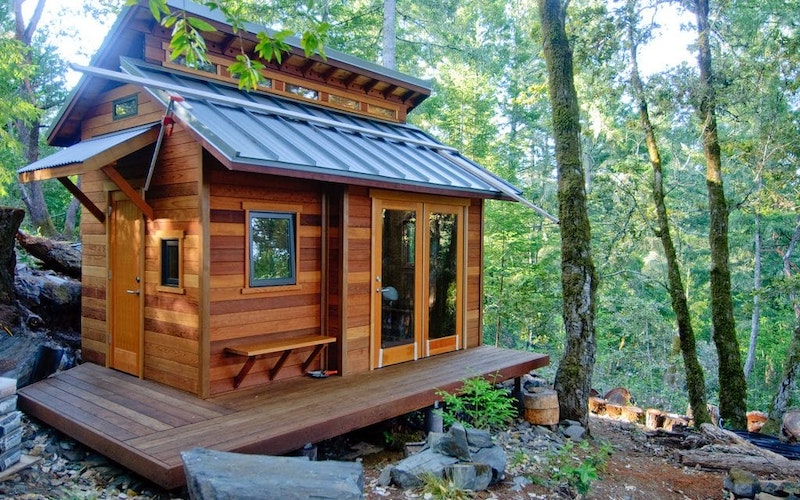 Local authorities are starting to get requests for building permits for 300-square-foot homes, which is difficult because the national average for the minimum legal size of a home is around 100O square feet. Here in the liberty-loving America you can't always just buy a piece of land and build a house of any size that suits you without the government intervening. Maybe we’re not as free as we think.
Local officials charged with enforcing building codes find these requests perplexing because they're used to getting proposals for plans, such as additions, that increase the size of the home. They're experiencing the inchoate Tiny House Movement that's attracting people who no longer wish to work so hard to pay for large homes that force them into a rigid and arduous weekday routine. Some of them are thinking of the planet and wish to reduce their environmental footprint. Others just want to simplify their lives. Living small, without the burden of a mortgage, can be liberating, both financially and spiritually.
In addition to authoritarian local ordinances, there are a number of challenges you'll need to overcome if you wish to downsize. You'll have to part with some possessions you think make you happy. The wine cellar has to go, and maybe even the television, but with a laptop and an Internet connection there are plenty of entertainment options.
The building codes specifying size requirements and zoning restrictions have made living small into an underground movement. There’s also the impression that the Lilliputian-home people are weird. Some try working with local officials, who really can't come up with a good reason for requiring people to live in domiciles of a certain size on their own property, and some look for loopholes, like putting wheels on their tiny home and making them, legally speaking, travel trailers. Living small requires ingenuity and persistence, because society’s more geared to the excesses of the showy McMansion. There are tiny home communities scattered throughout the U.S, however, and more are on their way.
Unlike regular homes, tiny homes are normally built from scratch and therefore require no mortgage. Their size also lends them to a DIY approach. The more skills you have, the more money you can save. The average cost to build a 200-square-foot home is around $25,000 to $35,000, but using salvaged building materials can cut that significantly. Teri Page, who’s Homestead Honey on her tiny home blog, built a 348-square-foot home in Missouri for $8270. Tiny Living sells a DIY kit for $6884, which comes with blueprints, a customized trailer as a base, and a list of materials to buy. At the highest end, a customized tiny house built can run from $80,000-$100,000, with all kinds of extras.
If there's a single guru of the miniature home world, it would be Jay Shafer, founder of Four Lights Tiny House Company, and author of The Small House. It started when the former mathematics professor began looking for an alternative to the 100-square-foot Airstream trailer he'd been living in. After winning the “Most Innovative Design” award in Natural Home magazine in 1999, Shafer decided to design and build little homes.
Shafer, who calls large homes “debtors prisons,” once lived in an 89-square-foot unit about the size of some people’s kitchens, but eventually had to settle for a 500-square-foot residence when he got married and had two children. Contrary to a common view that tiny houses are a rural phenomenon for nature-lovers in search of bucolic bliss, Shafer envisions tiny home communities within urban areas. His “Napoleon Complex,” which he facetiously calls “cohousing for the antisocial,” is a model of his vision. It's a community that would have private gardens, shared outdoor space, private storage units, and prominent pedestrian walkways.

The Tiny House Movement is the latest remedy for the rat race that a certain percentage of the population has long wished to escape. Its adherents tend to be individualistic, and aren't thrilled with a lifetime of cubicle work so they can live “normally.” The average person spends 34 percent of their income on housing. A new contingent's interested in cutting that down to around 10 percent and seeing how they can improve their lives with the added flexibility. Some people, when they're told the alternative isn't feasible enough times, just accept it. Others—you could call them pioneers—just keep right on looking for it.