The Hollywood Roast is Dead 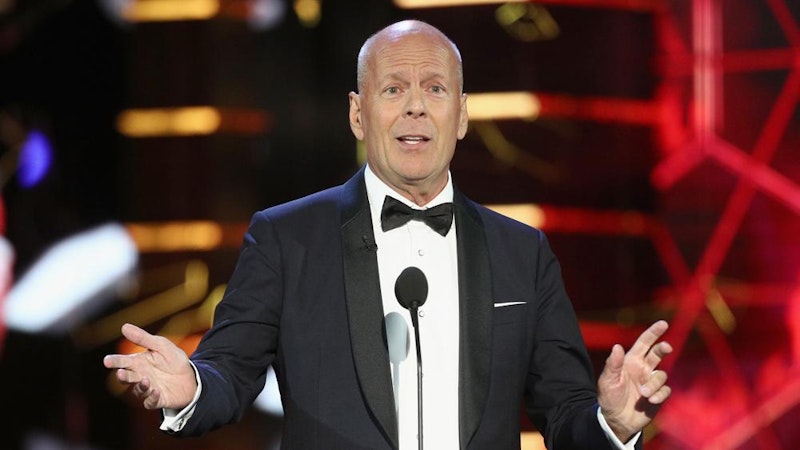 Bruce Willis was roasted last week on Comedy Central. The mess of a show was by turns touching, baffling, funny, revolting, and sad. It's a testimony to the mediocrity of modern Hollywood and yet another missed opportunity of a kind we won't have for long. We're running out of stars because cultural consensus has vanished without our realizing it. The movies still make money, TV is making more shows and fewer hits than ever, and celebrity is going digital. But Willis is one of the few stars we have left and his end is ignominious.

It's worth thinking about why this roast was such a disappointment, why the roasts are such a vile spectacle these days, and what the roasts once had to offer, when Dean Martin hosted. First, the host, Joseph Gordon-Levitt, was charmless. We're talking about a talented young man who somehow gave the worst performance of his career on a night when he should’ve breezed to success.

Second, were no stars interested in showing up to honor Willis? Ed Norton was there, the best and only good speaker of the night. Demi Moore made the inevitable surprise appearance, proving once more that America was right to forget all about her more than 20 years ago. And Cybil Sheppard was there, too, just as unfunny and even more forgotten. Dennis Rodman was there; so was Martha Stewart; I'm not sure you'd even recognize any of the other names, much less long to witness their comic chops. These people are the shipwrecks of American celebrity and we made them that way, but I don't think anyone is going to sign up to do penitence by watching them try to be funny.

Obviously, Hollywood has moved on from Willis, who now makes embarrassing action movies. Maybe nobody sends him scripts; maybe he's not trying to do anything more than cash a paycheck; either way, it's depressive for the star of Die Hard to end up in movies that don't even get released to theaters. And now he can’t even get his Hollywood friends to roast him. Celebrity turns out to be one more form of powerlessness.

Third, the comedy was crippled by indecision. Was it supposed to be a night of filthy sex jokes that have nothing to do with either Willis or roasting? Or a somewhat tender comic salute to Willis? Bad writers must be blamed to some extent, but the problem goes beyond them. It started with the first speaker, a young lady you've never heard of, who did her best to look provocative in a sexy way and to provoke disgust by her sex jokes. This was a bad sign—women in comedy who feel the need to prove their abilities by disgusting sex jokes are rarely talented and never worth the attention. The gist of her remarks is that people in her generation don't even know who Bruce Willis is. This was perhaps not the most inspired way to start the show.

The roasts are about America's attitude to celebrity. Back when we had cultural consensus, respectability was the order of the day. The roasts Dean Martin hosted in the 1970s were a fine piece of Americana, regularly included the great democratic comedian Don Rickles, and the roasters included lots of stars, from politicians like Ronald Reagan, Barry Goldwater, and Hubert Humphrey, to musicians like Frank Sinatra and Sammy Davis, and actors like Jimmy Stewart, Henry Fonda, Orson Welles.

Nowadays, there's an attempt at glamour, but no class. In fact, the roasts announce a new agony in American celebrity and a generational struggle. Gen-X and Millennial comics of variable talent are there to take revenge for the fact that they'll never be celebrities by eviscerating in the most disgusting manner whoever does achieve any degree of celebrity. It's the agony of egalitarianism, where people who think they're clever enough to make jokes debase themselves publicly because the public makes celebrities of the basest people you can imagine. At the end of the show, everything and everybody is trash, the celebrities and the comics alike.

Two generations back, the stars of Hollywood were going out in style, with a joke. Already, they were the object of nostalgia rather than feverish excitement, replaced by rock music, the Method actors, and newer, stranger pursuits, including the drug culture. But America loved those aging stars and enjoyed their comical reunions, especially since they seemed to be friendly and not to take themselves too seriously. They were putting on a show worth watching.

Today, the shocking stuff pours forth endlessly, because aspiring celebrities are desperately afraid they'll never get their turn. They're so eager to be disgusting that they become boring; they must live with the fact that they've debased it so much that nobody cares about it. Partly, this ugliness is caused by resentment of the Boomer stranglehold on Hollywood, which is understandable. But it's also because there's no cultural consensus anymore and so we can’t create stars. Not merely celebrities—but artists whose personas reflect something worthwhile in the national character. Bruce Willis, the everyman hero, the comic cowboy in the urban jungle, is one such star.

The roasts are the dark side of the culture of Oprah and Ellen. Instead of the forgiveness and positive thinking Oprah falsely advertises, the Comedy Central roasts build on the ugliest truths about celebrity in America. The exploitation and self-exploitation, the transient character of celebrity and the worthlessness of most celebrities, the temptations celebrity creates and which our society both feeds and condemns, and, above all, the insatiable appetite for more celebrity, the better to violate it, whether by paparazzi or roasts. Celebrities end up as our sacrificial victims—they’re so addicted to celebrity they’ll consent to celebrity-humiliation rituals.

For all that, Bruce Willis seems to be in good health and good spirits and is clever enough that he could pull out of his tailspin if he wanted to—maybe this was him hitting rock-bottom.