You Know Who Sucks? Nicolle Wallace

GOP character assassin laughs it up with Rachel Maddow. 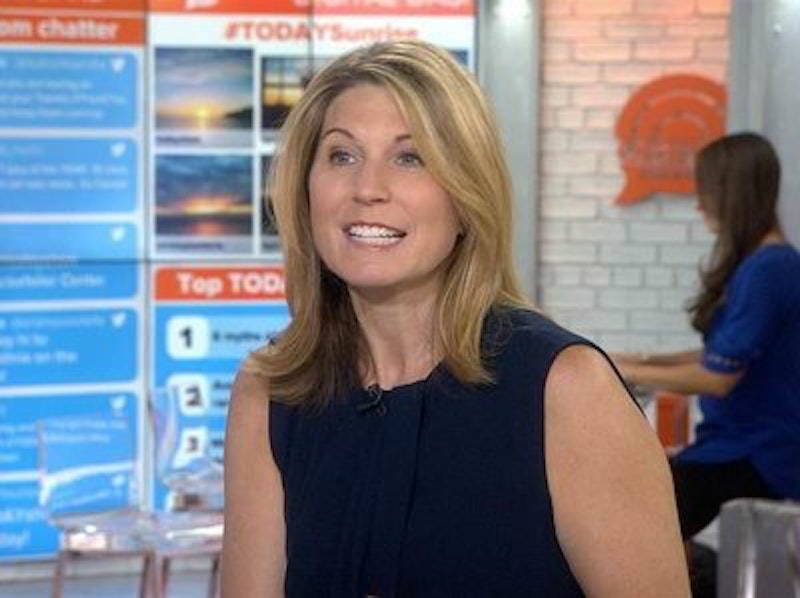 Nicolle Wallace, who can’t spell her own name, ought to stop appearing on TV. But the people at MSNBC like her, so there she is. With her bare arms and her big chin. Her arms: they drape, meaning the flesh hangs off them. The muscles don’t hold firm; they’re miniature pudding-swings. Possibly Wallace doesn’t care. But I dislike her, so I think no. I think she’s staking a claim and that she has no idea she doesn’t deserve to. A lot of women show their arms to show how firm they are. It’s a status move, especially for white-collar women in middle age. Wallace wants some of that bare-arm status, and she doesn’t factor in that her arms don’t qualify.

Of course, I don’t know this about her. But I know that Nicolle Wallace directed Sarah Palin in one of the lower-rent things that Palin did as a candidate. This was during the 2008 campaign, when Palin was running for vice president and Wallace was handling her for the Republicans’ presidential candidate, John McCain. A little down the road, after the ticket lost, Wallace denounced Palin as a stinker. Today Nicolle Wallace, a Republican operative, is a talking head on a Democratic channel. She provides background info about her party as it falls prey to the swamp thing, Donald Trump. She and Rachel chat together and share laughs. But liberals who hate Trump and Palin ought to recognize that Wallace is awful in much the same way.

In 2008 Palin received flak for suggesting that Barack Obama palled around with terrorists. (She meant Bill Ayers, a former Weatherman who became a doer of good works in Chicago.) Dana Milbank, a columnist for The Washington Post, wrote last week about Palin’s old attack. He cited it as a prize example of how much Palin and Trump have in common, especially when it comes to “portrayal of President Obama as something other than American” (Milbank’s term). But Palin didn’t come up with that attack. It was suggested to her by Nicolle Wallace.

The year after the 2008 election, Milbank’s colleagues at the Post discovered an email that had been sent to Palin during the campaign. The email was from McCain headquarters and suggested she try the Ayers attack. It even gave Palin the wording: “This is not a man who sees America as you and I do—as the greatest force for good in the world. This is someone who sees America as imperfect enough to pal around with terrorists who targeted their own country.”

You can tell that’s crafted prose. “Palling around” could be (as with Obama and Ayers) friendly interaction at official functions, or it could be (as the campaign wanted to imply) two compadres hanging out and trashing America. “Please do not make any changes to the below without approval from steve [sic] or myself because precision is crucial in our ability to introduce this,” the email warned.

The writer, as you’ve guessed, was Nicolle Wallace. Steve was Steve Schmidt, who managed the campaign. Like his colleague, he goes on MSNBC and talks about the awfulness of Palin and Trump. Wallace and Schmidt don’t strike me as better people than the upstarts. “But my brother Esau is an hairy man, and I am a smooth man.” That’s about it.

And her arm-flesh hangs. Altogether I think she’s a loss.