The right wing is convinced the President is playing with their minds. 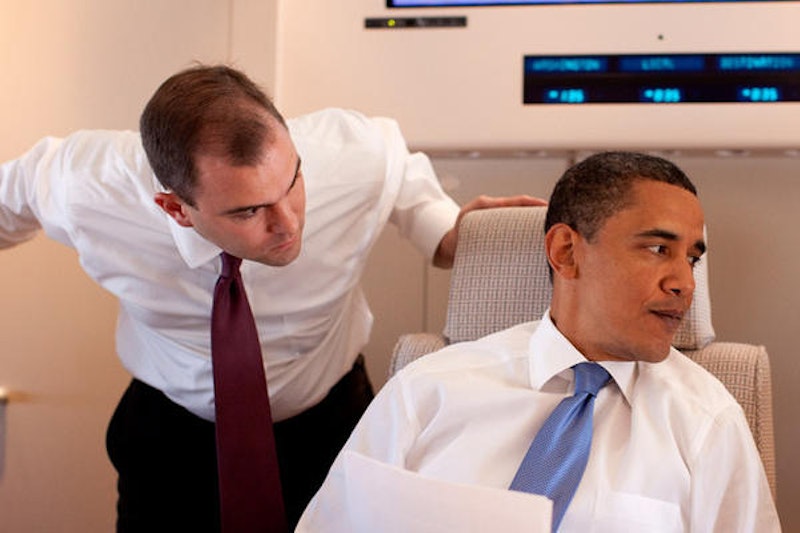 At brunch, I didn't finish reading the Sunday New York Times David Samuels article about Obama's foreign policy guru and spin man, Ben Rhodes, but it intrigued me with its unlikely story of a guy going from aspiring novelist in an MFA program to mind-melder with the POTUS in the White House. I sensed no storm clouds of controversy when I folded up the magazine section to take it home but the rain was already coming down hard.

Samuels portrayed Rhodes as a master manipulator of the media (which he appears to despise) who's employed to mislead the public into overestimating the Iran nuclear deal. Of the young reporters he was charged with convincing that the Iran deal was a good one, Samuels quoted Rhodes as saying, "They literally know nothing."

The reaction was swift. Editors at The Washington Post flipped out because the article made them look like gullible dupes. Ditto for Jeffrey Goldberg of The Atlantic. To the political right, Samuels' bombshell was a confirmation of their beliefs that the Obama administration had been lying all along about the Iran deal. Fred Fleitz wrote in National Review that Samuels had explained "the unprecedented incompetence, deceitfulness, and extreme partisanship of Obama's National Security Council." Washington Free Beacon's David Rutz wrote that "Rhodes pushed a fictional narrative that Obama saw an opportunity to make a nuclear deal with Iran beginning in 2013, when elections brought ‘moderates’ into power," suggesting that Obama had, despite his denials, direct negotiations with the previous hardline Iranian government.

This brouhaha has stirred up long-held feelings from conservatives that Obama has been gaslighting them since he took office, just like Charles Boyer's character (Gregory Anton) did to Ingrid Bergman's (Paula) in the 1944 George Cukor thriller, Gaslight, when he fed misinformation to her in an attempt to convince her she was losing her mind. The President, they claim, is the new Gregory Anton—a skilled revisionist capable of making people feel they've misremembered the past. They cite how he's handled controversies surrounding Fast & Furious, Benghazi, the IRS, Obamacare, and veterans dying because they couldn't get a doctor's appointment.

Gaslight truthers are convinced that the President, with the media as enabler, is mentally abusing Americans by playing with their memories. The most familiar Obama-related gaslighting narrative is, of course, Benghazi. Obama opponents accuse him of waiting 14 days to specifically call it a terrorist attack. Obama denied this when Mitt Romney called him on it in their debate in 2012. Right after the attack, the President repeatedly called it "an act of terror" rather than a "terrorist attack," and there's a subtle, but very real, distinction there. CNN's debate moderator, Candy Crowley, stepped in to rescue Obama at that crucial moment, telling Romney he was wrong, but had the GOP candidate been better prepared on the specifics of the language Obama had used, he could’ve landed a good punch. Instead, he got thrown off balance and it appeared Obama had gaslighted him, with Crowley's assistance. She admitted later she'd been incorrect, and that Obama had waited significantly before calling Benghazi a terrorist attack.

And then there's Obama's assurance that, if you liked your insurance plan before Obamacare was installed, you could keep it, which was false. You can watch him saying it 36 times in this YouTube video, sometimes adding "period" for emphasis right after saying "you can keep it." Then you can watch this one with the President saying that what he’d actually been saying all along was you can keep it "if it hasn't changed since the law passed." Gaslighting? It's all there in the videos.

Now Fox News correspondent James Rosen has revealed that a 2013 video of him at a State Department briefing, where he was questioning then-spokeswoman Jen Psaki, was edited to cut out the part where Psaki, referring to alleged secret American talks with Iran, suggested that the media needed to be manipulated. The timing of the video purging was interesting, coming right on the heels of Samuels' article, in which Rhodes admitted that the White House secretly pursued nuclear talks much earlier than they'd revealed to the public. Rosen now suspects that the Obama administration also lied about matters of substance surrounding the Iran deal.

It's tempting to write off the gaslighting charges as delusions coming from the same people who call Obama a Kenyan Marxist bent on destroying America, but it's not that simple. Samuels' 10,000-word article is now bolstering the gaslight truthers' credibility. It portrays the Obama administration as one where an important political narrative like that of the Iran nuclear deal can get shaped by a guy who used to write short stories about "losers in garden apartments." It's hard to deny Obama does it. After all, he's always been extremely confident of the power of his rhetoric, which he prefers to use in place of the mundane task of schmoozing legislators. Who knows? Maybe he thinks, somewhat along the lines of Richard Nixon and crime, that when the President does it, it's not gaslighting.