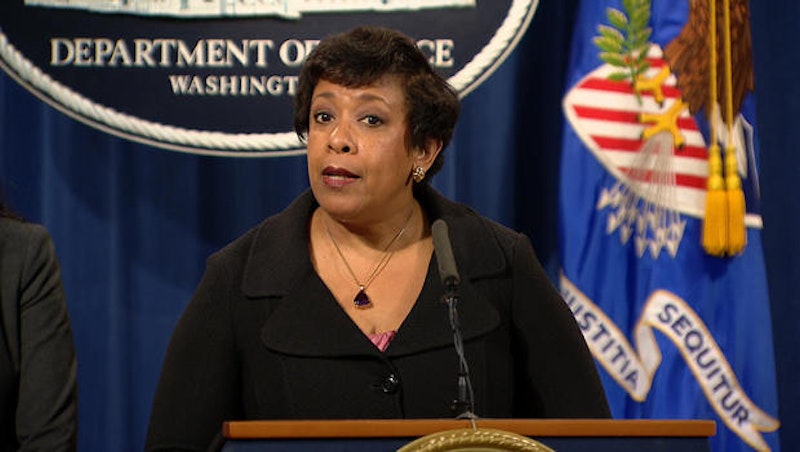 “This country was founded on a promise of equal rights for all,” pronounced U.S. Attorney General Loretta Lynch on Monday, “and we have always managed to move closer to that promise, little by little, one day at a time.” It was a platitude that, though invoked countless times by Lynch’s fellow Democrats in innumerable other scenarios, was a balm for those to whom it was addressed: transgender Americans, whose rights have been attacked for months as “bathroom bill” frenzy sweeps the nation. Lynch’s speech announced a lawsuit against North Carolina and took a hard line against the state’s heinous anti-trans legislation. “[N]o matter how isolated or scared you may feel today,” Lynch assured us, “the Department of Justice and the entire Obama administration wants you to know that we see you; we stand with you; and we will do everything we can to protect you going forward.”

Stronger words have rarely been spoken on our behalf by any politician, let alone the Department of Justice’s leader. Lynch’s passion came in part from how much the current situation reminds her of the Jim Crow policies which also afflicted her native North Carolina. She invoked those as well during her speech, urging the nation to “write a different story this time.” It’s easy to see why; after all, Lynch’s career path was inspired by the exploits of her grandfather, who helped African-Americans move north to escape the institutionalized racism of the South. In that context, Lynch’s zeal makes perfect sense: she’s just taking care of the family business.

Like most trans people, my initial reaction to Lynch’s speech was twofold relief. Even if her words had been strictly academic and accomplished nothing but announcing the lawsuit, it would’ve been satisfying to know the DOJ intended to take swift action. But especially in her closing remarks, Lynch solidified herself as potentially the most influential trans ally in the nation. I’ve only been out since last year (to the public and myself), but that’s been enough time to observe the massive tonal shift in this country when it comes to talking about trans issues. I began my social transition just before the Supreme Court’s Obergefell v. Hodges decision affirming gay marriage, and in less than a year’s time, my new community has risen to dominate the headlines and demand national attention. Having that struggle recognized is a huge relief to me, and exponentially more so for other trans people, some of whom have spent their entire lives lobbying for this kind of validation.

But as we celebrate this political sea change, we cannot allow ourselves to simply take Lynch and the DOJ at their word. After all, Obama himself was (conditionally) opposed to gay marriage as late as 2008, only taking a concrete stance on the issue after years in the White House. Gay marriage was a political landmine, and the President waited until there was a clear mandate from the public to make his final choice. Lynch has, in the past, been the administration’s mouthpiece for championing LGBTQIA rights; just before the Obergefell verdict last June, Lynch addressed Lambda Legal’s annual reception, saying the DOJ would interpret Title VII’s gender discrimination protections as trans-inclusive from that point on.

So it’s nice to see Lynch follow through on that promise—but what else is the DOJ doing for trans rights? It’s not like bathroom bills are the only challenge we face; they’re merely the newest and most media-friendly. Lynch’s attention is also desperately needed in cleaning up her own department’s messes when it comes to treatment of transgender prison inmates, many of whom are subjected to abuse at the hands of fellow prisoners and corrections officers alike. Indeed, if Obama is so invested in protecting the rights of transgender Americans, as Lynch asserts, why is Chelsea Manning still incarcerated with male inmates at Fort Leavenworth, where she’s subjected to daily indignities and not even allowed to grow out her hair? If Lynch is truly committed to doing “everything we can” to protect us, does she plan to institute policies that would house inmates in facilities matching their gender identities?

Don’t get me wrong: Lynch’s statements are truly a watershed moment in American politics, and she deserves credit for taking a stand against truly despicable legislation. But as is the case with so many statements by those in the liberal establishment, we must be careful not to mark anything down as a win based solely on a stirring speech. Lynch is leading the way—let’s see if the rest of Obama’s administration, and Lynch’s successor, will follow her example.