And trigger warnings and safe spaces are lazy fixes. 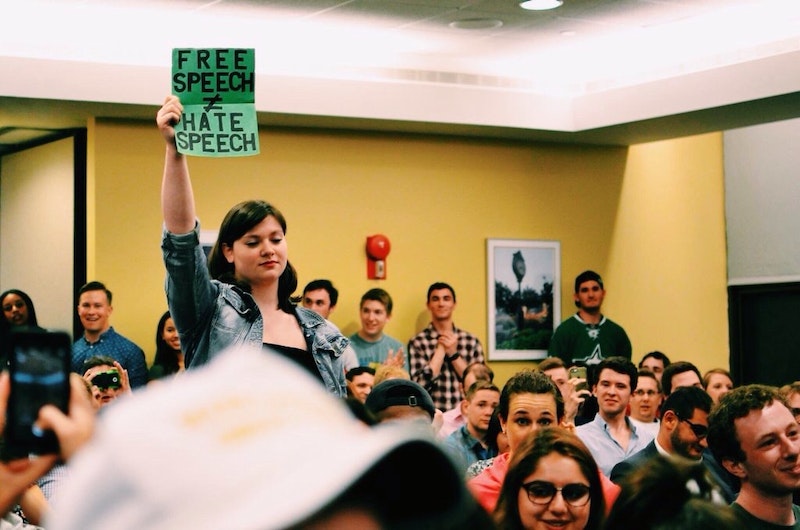 In my last post, writing about President Obama’s chiding statements on Black Lives Matter, I had a specific incident in mind that I skipped because I didn’t think it was relevant, but it turns out I was wrong.

The incident was about protesters’ response to guest speaker Milo Yiannopoulos at Rutgers University. About 10 minutes into his speech, protesters stood up from the audience, and smeared their arms and faces in red paint amid chants of “black lives matter!” I initially thought it was a dumb stunt by naïve kids who didn’t understand the Streisand Effect—a one-off event. What I didn’t realize was that it was part of a larger pattern.

Yiannopoulos, a tech journalist and right-wing pundit, has spent 2016 on a campus speaking tour, and is routinely met with protests, frequently disrupting his appearances. During a joint appearance with American Enterprise Institute scholar Christina Hoff Sommers at the University of Minnesota, protesters disrupted the event with air horns and shouted expletive-filled rants about “supporting women, not haters!” As a woman, I’d like to tell that kid that he’s not supporting women, he’s deafening them with his damn air horn. Another appearance at American University kept much of the protest action outside the event, according to a student who said he was physically and verbally assaulted by protesters on the way in.

The joint appearance at UMass/Amherst with Sommers and right-wing comic and pundit Steven Crowder was really over the top. Nearly all of the 90-minute conversation and Q&A session was fraught with persistent heckling. I can’t even call it protesting because it frequently sounded like the kind of heckling and outright trash talk I’ve seen hurled at opening acts (like when I saw Superdrag open for Green Day—I think they managed three songs). The defining moment of that evening came when Sommers was at the podium, and a heckler shouted, “Stop talking to us like children!” To which Sommers replied, “Then stop acting like a child.”

That the event at Amherst was dubbed “the Triggering” by event planners says everything about the level of discourse that campuses are willing to engage in. To get a full understanding of where these kids are coming from, I found some YouTube videos made by four of the protesters from the Rutgers event who tried to explain their actions. Their explanations were such a vague word salad that the clearest idea they had was that, in their view, Yiannopoulos is a racist, sexist hatemonger who had it coming. It’s barely a position, let alone one worth defending.

In all honesty, I don’t agree with Yiannopoulos, Sommers, and Crowder about much of anything—I’m the sort of feminist lefty they love to rail against. Unlike too many young people who share the same positions as me, I believe it’s important to respect the rights of people I disagree with. What scares me is this movement towards treating college students, who are usually legal adults, like they’re still children.

University of Chicago law professor Eric Posner wrote that college students should be treated like children because they’re still children, and that treating students like adults is the problem. Posner bases his argument on the idea that because the more draconian changes to contemporary speech codes have come from the students themselves, it’s an exhibition that they’re not ready for the challenges of adulthood. As if to validate Posner’s argument, a Rutgers student wrote an essay in defense of applying trigger warnings to literature. The student argues that trauma is a common enough condition that “by creating trigger warnings for their students, professors can help to create a safe space for their students—one that fosters positive and compassionate intellectual discussion within the collegiate classroom.” These arguments are lost on me because I thought the purpose of college was to prepare people for adulthood.

As I listened to Yiannopoulos and Crowder mock trigger warnings and safe spaces, I initially thought they were making light of people with severe trauma histories, but as I read that piece from the Rutgers student, I realized just who was making light of trauma. I think the student has genuine compassion, but the mental health community has different metrics. If one’s trauma history is so intense that it’s interfering with their work and their studies, they need therapy to cultivate the necessary coping skills. As Sommers pointed out in her presentations, triggering is inherently unpredictable. In my own experience of talking with war veterans and sexual assault survivors, their stories bear this out. Even after years of mental health treatment and building functional lives, they’ll occasionally have moments where they’ll encounter something mundane, like an odor or a cadence in a song, and it will trigger a panic attack or a dissociative state. Trauma is often too individual and complex a condition for one-size-fits-all Band-Aid solutions. By stamping everything with a trigger warning, it creates a boy-who-cried-wolf effect that denies serious consideration of those who truly need it.

One aspect of the demand for trigger warnings and safe spaces that’s overlooked is an element of elitism. Because I went to community college and trade school, I never encountered the demands for coddling that I’m seeing at name brand schools like Rutgers or Yale or Brown. I don’t think it’s out of line to assume that most of the students at these schools come from affluent backgrounds, and I hate to assume that they’re all very spoiled. But the reason I think the students having tantrums over Yiannopoulos speaking at their schools are spoiled is that he’s there at the invitation of right-wing student groups. To have so little respect for one’s peers in this regard is incredibly selfish. I also think that these tantrums and stupid demonstrations with paint and air horns are disrespectful to those students who are capable of peacefully protesting. During the Q&A portions of Yiannopoulos’ engagements, there are some students who will dissent and disagree with him, and quite a few have expressed their exasperation at those who are violent or disruptive, often saying, “they don’t speak for me.”

As I was researching this, I thought of a lesson my father taught me. He was a history buff, and really hated Howard Stern. But when Stern was having problems with censors, my father rooted for the radio personality to win. When I asked why, my dad pointed to his bookshelf and said, “Howard Stern might be an annoying jerk, but he has the right to be an annoying jerk. Protecting his right to be a jerk means protecting the rights of William Manchester and Nigel Hamilton to write those big history books.” The same lesson applies here. I don’t care for what Yiannopoulos has to say, but I’d rather live in a world where he’s free to say what he pleases.