Whiteness is an identity. 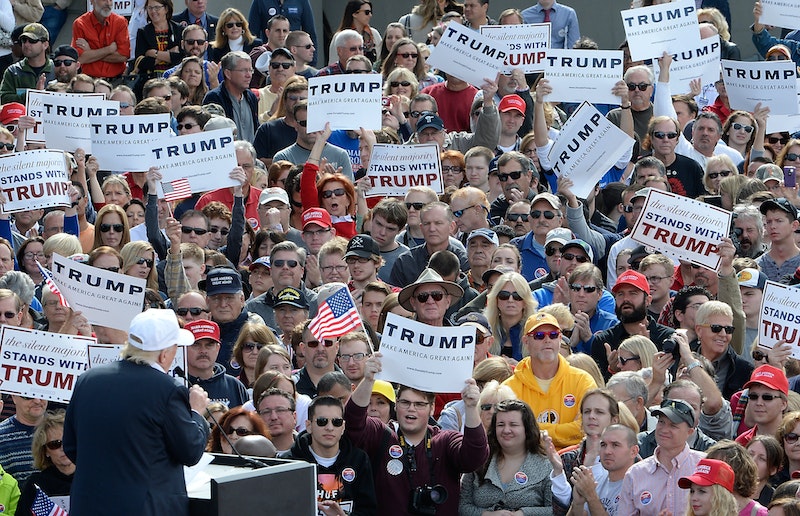 Marxists and reactionaries agree: identity politics is a cancer undermining responsible political engagement. Earnest socialists castigate liberals for using charges of racism to distract from the serious business of economic hardship. Libertarians and MRAs whine that feminists are dragging us into a gushy dystopia of weak-minded totalitarianism. All agree: politics based on an oppressed identity is narrow, misguided, and parochial. Black people, women, trans people, gays, Asians—they all need to focus on the bigger picture, already.

People tend not to see it as identity-based. That's because white identity politics has been so historically successful. Advocating for white people—and particularly for white men—is seen as normal, natural, and unremarkable. Of course, it was an unfortunate blot on his character that Thomas Jefferson owned slaves, but you couldn't really expect him to see "inalienable rights" as applying to black people, because whites naturally focus their politics on the interests of whites. Of course, the Republican party wins white people—and especially white men— while every other demographic group, including African-Americans, Hispanics, Asians, and women, votes for the Democrats. But that's a sign that the Democrats are mired in identity politics! White men have no identity, they’re the blueprint. Therefore, the party that rests solely on white male identity is the party that forswears identity politics.

The truth is, white identity politics in the United States isn’t just one of many identity politics. It is the identity politics: the one which has been most effective as a political force, and has created the groundwork for, and the necessity of, other identity-based politics. When Columbus sailed into the Caribbean, the native peoples greeted him with curiosity and enthusiasm; they were willing to treat him as a fellow human being. It was Columbus who decided that white identity excluded indigenous people, and that he was therefore justified in launching a genocidal campaign of murder and child rape. It wasn't black people who decided that humanity should be divided into different identities of white and black. Rather, it was slaveholders that built their own white identities on stripping other people of humanity. And it wasn't women who said that people's genitals determine whether they get to vote.

White men pioneered a politics designed to provide them with political, social, and cultural power. Oppressed people had little choice but to respond by working, as a group, against their own oppression. Black people—robbed, beaten, segregated, murdered—have responded by asserting that their interests are not adequately represented by white identity politics. Similarly, women have pointed out that their interests are not represented by male identity politics. Is that parochial? Or does it instead, reflect a wider, more inclusive vision—one in which rights, sympathy, and attention are afforded to everyone, rather than just to one, particularly vocal, particularly ingrown group?

As in the time of Columbus, and Thomas Jefferson, white identity politics continue to thrive today. Donald Trump demands a wall across the Mexican border, to protect white people from Hispanics. He demands a ban on Muslim immigration, to protect white people from Muslims. He sneers at Black Lives Matter protestors, and encourages people at his rallies to attack them, because, in his view, white lives are the ones that matter. If people on the left or the right want to critique identity politics, they might start with this: the one identity politics that consistently traffics in hate, divisiveness, and violence. The one identity politics that insists there’s only one valid identity, and that those who speak from other positions, or from other perspectives, are illegitimate, and must be silenced.