The sweaty-fisted Christian takes three heartland states because this year everyone gets their turn, over and over. 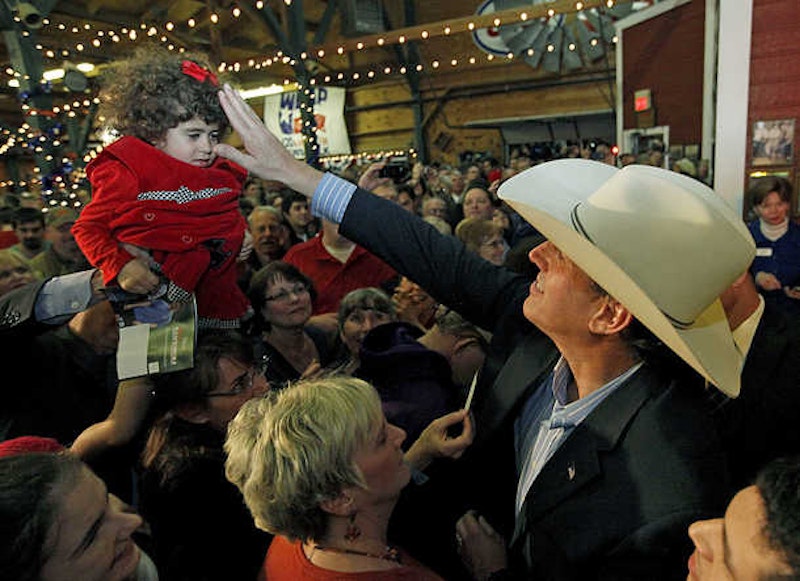 Mitt Romney’s people argue that no delegates were at stake in this week’s voting. But if the elections were all beauty contests, their candidate must be ugly. In Minnesota, Romney finished 10 points behind Ron Paul. In Missouri he made it to second place, but second place was 30 points behind first. In Colorado he kept the losing margin to single digits, but he was supposed to win Colorado—just the week before he had swept Nevada, which is nearby and similar in makeup.

Worst of all, one man managed to win all three states. Rick Santorum, the fellow whose jaw clenches at Hugo Chavez, gay marriage, and Iran, piled up a night of miniature but perfectly formed triumphs. Miniature, because winning 45 percent of the Minnesota caucuses turns out to be the same as winning not quite 22,000 votes. But the percentages still look good, and he took everything when the most optimistic calls had been for Missouri and a narrow win in Minnesota.

The press responded accordingly. “Upended the race,” said The Denver Post. Fox News: “Santorum Shakes Up GOP Race.” The Washington Post stayed with “upend,” as in: “Triple Victory for Santorum Again Upends GOP Presidential Race.” You’ll notice that picking a verb becomes tricky when dealing with the world’s prime target for anal sex foolery (“‘We felt it coming,’ Santorum told Fox News’s Fox and Friends”), and also that “again upends” suggests a truth so far overlooked: The Republican race for president isn’t pointing one way or the other. There’s no up or down here, just four guys rolling in a barrel.

How did this happen? Mitt Romney didn’t spend a lot of money on ads. He campaigned in Colorado and a bit in Minnesota, canceling some appearances in the second state so he could squeeze in last-minute appearances in the first. But in Minnesota his campaign spent just $5000 more on ads than Santorum’s did, and in Colorado his campaign’s ad spending was just $24,000, as opposed to more than $249,000 in Nevada. Of course, the other campaigns didn’t spend anything in Colorado, but their candidates don’t share the handicap of being Mitt Romney.

Romney ignored Missouri altogether, as did Newt Gingrich. Romney’s reason was that the primary there doesn’t choose any delegates. (That comes at a caucus next month.) Gingrich may possibly have had that reason too, but in addition he hadn’t managed to get on the ballot. He chose to let all three states go by the boards while he concentrated on Ohio, which has its primary next month.

Between them, the Minnesota and Colorado caucuses had 70 delegates more or less at stake. The delegates are chosen a little down the road, which allows the Romney campaign to say Santorum picked up nothing Tuesday night. But the caucus votes influence who gets the delegates, and Santorum did well enough for the Associated Press to estimate he’ll add at least 55 delegates to his total. Since he had 17, that’s a big jump. It would put him at 72, second behind Romney with 112.

Bad numbers for Romney. In 2008 Romney won Colorado with 60 percent of the vote and Minnesota with 41 percent. Now this. Factor in turnout and his decline is horrendous. The liberal site Think Progress lines up the figures, which I’ve rounded: in Minnesota, 26,000 votes for Mitt in 2008, and 8000 this time; in Colorado, 42,000 versus 23,000; in Missouri, 172,000 versus 64,000. It’s been argued, pretty reasonably, that the Democrats won in 1992 even though turnout for their primaries that year was lower than it had been in 1988. Still, voters seem to be running from Romney rather than toward him.

Who would have thought?  There are ideas that you have to back into, and the Santorum revival is one of them. My guess from a week ago: “Some caucus state is going to fall his way. I say so just because the year’s been fractured and he’s got a lot of stick-to-itiveness, even for a politician.” On Monday we have this at The Fix, a Washington Post blog: “Rick Santorum may actually win a state or two today.” Now reality has delivered three.

That’s how the year has worked. Those of us guessing at voter outcomes dimly sense that momentum isn’t much of a force this time around. But we can’t quite believe that it’s been suspended; there’s a mental barrier involved. Let’s try to jump over it and play with the idea that no candidate will start being the candidate that people vote for just because they expect him to win. That means all four can bounce along into late spring.

If they do, odds are good that two of them will end up on the ticket, unless the fellow who wins can make a vice presidential pick that drops people’s jaws. Since Romney is the one likely to be on top, the VP choice would have to be very conservative and possibly very Christian as well. Michele Bachmann? But she was a dud in the pre-race, so probably not. Sarah Palin? No, be serious. But what spectacular right-wing Christian do you choose when you’re being serious? (Tim Pawlenty is not spectacular.)