Beaten in Florida, Newt talks of his dynamite first day in the White House. 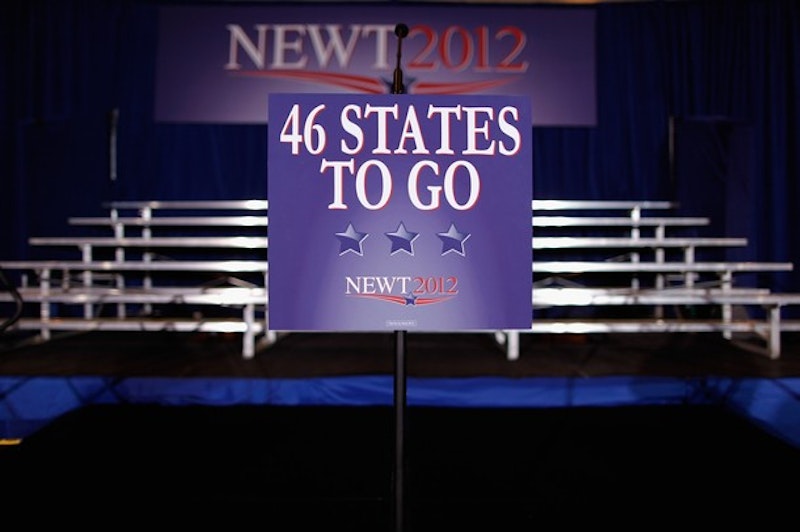 So much for drama this time around. Mitt Romney and his allies spent about $15 million on ads attacking Newt Gingrich and then collected all of Florida’s delegates. After Newt’s lightning flash in South Carolina, we have a repeat of the usual: spend and win. This is depressing if you like a show and not reassuring if you like democracy. Romney dumped a ton of money on a state’s TV outlets, all of it to buy attack ads, and walked off with a landslide. That makes democracy look thin indeed. At least we have the debates to point to—it wasn’t just the ad budget, a human element was involved. But in a race between two demagogues, the richer one is winning.

Rounding off the figures, Romney took 46 percent of the vote, Gingrich took 32 percent, Rick Santorum 13 percent, and Ron Paul seven percent. Turnout was down by 200,000 from 2008, according to Politico. That year turnout came to 51 percent, this year it was more like 43 percent. The Republicans are supposed to be eager for Barack Obama’s scalp, but getting to the voting booth has been a challenge for them.

Some anti-Mitt numbers. As noted, his side spent a little over $15 million on TV ads, with more than half of that coming from his super-PAC. Newt’s side spent $3.39 million, two-thirds of it super-PAC money. As of last Friday, Newt still led in Gallup as the choice of Republicans nationwide. Finally, the 50 delegates Romney took in Florida leave him 1073 short. Despite the tremendous noise of the past half-year, to date all the candidates together have won just under 10 percent of the delegates required for nomination.

Romney’s helium. Romney seemed pretty good in his victory speech, by his standards. Of course, his voice has a helium effect that remains no matter what, whether he’s shaky or firm. And viewed in long shot as he stands at the podium, he appears to be built on two different scales: an expansive one for the head and a drastically reduced one for the body. And even last night, cheered after a triumph, he bobbled words more than most politicians do. He’s a hard man to listen to and should be doing something else. In his speech, Romney was elaborately gracious to the losers and tells fantasies about Obama’s activities as president. But since Romney is the winner, the night belongs to the loser, and that’s Newt Gingrich.

“If you’re comfortable with the way America is decaying.” As always, Newt has the phrase of the night. Decay aside, his enemy is now money. “We’re going to have people power defeat money power in the next six months,” he says, and he talks about “a people’s campaign.” It’s going to throw some muscle around, of some sort. Talking of his plans: “This is a future we ask you to join us in imposing on the establishment in Washington and imposing it on both parties.” The suggestive word there is “imposing,” with its suave hint of knocking the elites into line, of a power struggle that stops just short of being a convulsion. Newt has a gift for understatement, of all things, though it’s the sort of understatement that broadcasts itself. He knows to choose a trim, dispassionate word to hint that actually he’s talking about something dangerous.

Newt always strikes me as inflated or un-inflated. Last night he was inflated: fat and glossy and jabbing his finger straight at viewers. The crowd is dull to start with, but by the time he’s reached his whirlwind first day as president—“before we get to go to the various presidential balls, we‘re going to have a work period”—people got louder and happier. Newt’s presidential day is a tour-de-force. The man just wiped out in Florida, but he’s lining up bills on his desk and signing them. After that, executive orders: no more czars! It’s like listening to somebody telling you how he’d spend his lottery money. The crowd went for it: They’re spending the money with him. To me it seems like a very wingnut moment. They are far away from the rest of us.

Newt didn’t mention Romney, and he waited to concede until Romney had gone out and claimed victory. Newt opened his speech with a clever visual stroke. He wants to convince America that he won’t quit the race, so his campaign printed up blue signs that look like the usual sort seen at candidate rallies, but with a difference. The presidential campaign font spells out “Forty-Six States to Go.” Defiance! The slogan has the same flavor as “impose,” in that wingnuts, for all their faults, know how to get a point across through sly phrasing. As Newt spoke, the people behind him hold up rows of the signs. Hard to escape that message, and the look is dynamic—low-budget but effective. He’s a clever man. On the other hand, in the primary’s last days he spent ammunition attacking Romney as inadequately pro-kosher, and only one percent of the voters were Jews. It might have been a great issue if the right electorate had been around. You can see why Newt’s old colleagues roll their eyes when the subject of his “ideas” comes up.

The Curse and the Underwear. I should mention the Curse of Mitt. The theory holds that any candidate who gives grief to Mitt Romney on a debate stage will then verbally destroy himself, either through misfire or the eruption of words that shouldn’t come out. The campaign in Florida shows the Curse at work on a grand scale. Since before New Hampshire, Newt built up a hefty charge of Curse by snarling at Romney (“pious baloney,” for example). Then his volcanic nature wrenched about and he achieved the pair of grand slam debate performances that took him to first in South Carolina. Presumably Gingrich had placed himself beyond the Curse. But it pulled him down. Last week Romney went at him in the Florida debates, and Newt did not adequately go back at Romney. Pundits spoke of “mojo” and its sudden absence from Newt’s system. The Curse had landed on him.

Of course, Newt will be 69 before anybody is nominated, and it could be that he gets tired. But then you see him firing away after he loses a primary, pumped up about his White House bill signings.  He has the resources, but they don’t always show up at the right times. Why not? We’re back to the Curse of Mitt or its allied theory, Newt’s Underwear. This holds that Newt’s psychological problems won’t let him capture and hold actual power without wigging out. The wigging out is manifested by heavy underwear sweat and self-destructive behavior, such as choking in a debate. It’s obvious how the Curse and the Underwear could work together.

Romney took everything. Looking at CNN’s exit polls, you can run up and down the categories by age, income, race, gender, and education: He won every box. He even led among people who said “foreclosures in your community” had been a major problem or a minor problem: 43 and 47 percent, respectively. Among “not a problem,” he managed 54 percent.

For his part, Gingrich managed a decent plurality among the “very conservative” and a very thin one with Evangelicals. Of course, Romney took non-Evangelicals by two to one over Gingrich. Romney won Protestants as a whole and every other religious category on the list. It becomes a job to find any Newt majorities in the findings. Among people with a favorable opinion of Gingrich, 51 percent voted for him.

Geographically, Newt carried just one of the state’s five sections, and Romney was a percentage point behind him. This was North Florida and the panhandle, redneck territory, so Newt’s showing indicates that he can hope for a draw with Romney when the primaries in the redneck states come along. Or at least he can hope for a draw if, somehow, he manages an upset win in some other state to set himself up, scores fresh publicity from beating on a media personality, and maintains a lead in the national polls. None of these factors can be ruled out, but ruling them all in seems like a stretch.

No Santorum revival, then.  For now.  Some caucus state is going to fall his way.  I say so just because the year’s been fractured and he’s got a lot of stick-to-itiveness, even for a politician. Of course, all depends on his family situation.

Santorum brings to mind a favorite quote, one that captures the year so far. The blogger Jonathan Bernstein was thinking over Santorum’s chances in South Carolina: “It certainly wouldn't be surprising to see a late surge, although I don't see any particular reason to expect one.” That’s honest wording. This year it doesn’t matter if there is no reason to expect any given thing to happen. If it happens anyway, you can’t be surprised.