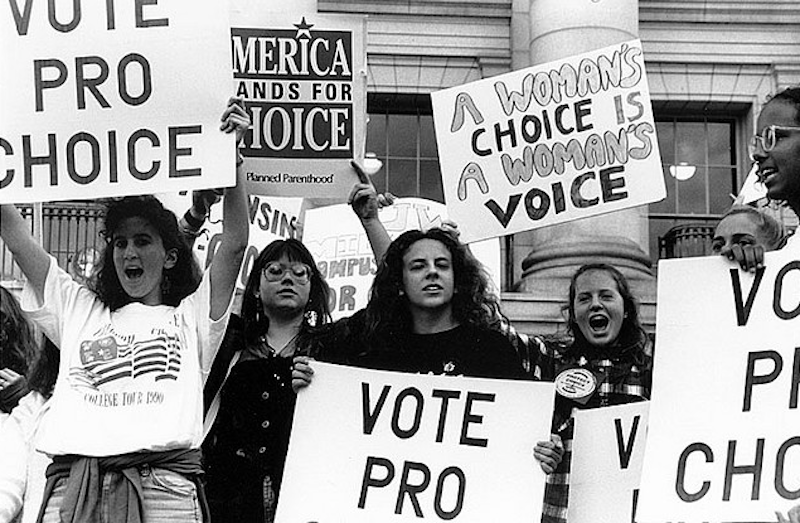 Let’s talk about abortion. It’s a difficult subject for those who pretend that denying a choice to rape victims is part of a supreme moral imperative—not to mention making things up, playing loose with the facts, preying on ignorance, and issuing baseless statements. This is how most pro-life arguments are made. Let’s face facts: you cannot hold a zygote in your arms. Even the womb has trouble holding somewhere between a third and a half of those tiny buggers (that is without any form of contraception). And the womb is supposedly designed to handle that task with zero failure.

Anyone who argues otherwise (and this is at least partially a response to Jeremy Lott’s article on this site last month) is more than likely oblivious to what forms first. The anus. Use “clinical in a contextually ambiguous way” all you want; you’re still lying. The actual clinical term, according to more than one kind of doctor and any number of medical encyclopedias, is “parasite.” This should come as no surprise considering that, in some cases, the mother’s own immune system will attack the fetus too. The point here is that the success of a fetus is not a given. That and the fact that it is easy to form a zygote in a Petri dish, but thus far impossible to form an infant.

If we’re to believe the data from the Guttmacher site, abortion rates trend lower in sub-regions where there are liberal abortion laws. In fact, in countries where the laws are strict, the abortion rates are much higher (the opposite happens where abortion laws are less strict). It certainly seems that the facts show that strict laws and laws against abortion do more harm to their own agenda than good. Furthermore, abortions tend to be unsafe in nations where abortion laws are restrictive. To my thinking this defeats the purpose. Isn’t the Pro-Life message supposed to be about protecting life?

As for the claim that women are using abortions as birth control, the following quote handles that:

[T]he majority of women having their second or even their third abortion were using contraceptives during the time period in which they became pregnant. In fact, women having a repeat abortion are slightly more likely to have been using a highly effective hormonal method (e.g., the pill or an injectable). This finding refutes the notion that large numbers of women are relying on abortion as their primary method of birth control. Rather, it suggests that women having abortions—especially those having more than one—are trying hard to avoid unintended pregnancy, but are having trouble doing so.

It’s a stretch to claim that abortions are now the new pill.

There are those in the pro-life corner who don’t want anyone to have access to contraception or abortions, citing a statement from President Obama telling religious hospitals “...that they must provide funds for sterilization, abortifacients and contraceptives in all their basic healthcare packages.” Of course so-called religious institutions don’t have to follow that “edict” any more than they have to take government money to provide a public service. If Catholic hospitals don’t want to betray their conscience, they ought not take money from the U.S. government. Otherwise they ought to live up to their end of the deal. If these organizations didn’t want strings-free money, they most likely wouldn’t complain. Granted, the White House has changed the landscape of the subject with a compromise, but that won’t alleviate the ongoing controversy.

It should come as no surprise that, historically, the clergy of Catholics, Baptists, Mormons, and Orthodox Jews are together on one side of the of the abortion debate. After all, they are motivated by greed. More babies leads to more bodies filling seats and collection plates, and voting as they are told by the priests who manage their flocks as though they worked for the church. I’ll spare you quote from the Bishop Timothy Dolan or his lobbyist army. We’ll ignore the whole matter of Christopher Hitchens, who himself had negative experiences with abortion, and despite that he was someone who was pro-contraception and felt science should have the solutions to prevent abortions, not some fundies. Hitchens supported the use of Mifepristone and did not wish to see Roe v. Wade overturned.

Here is the bigger issue at the core of the abortion debate; something ignored by those that identify themselves as “pro-life.” The issue is rape and death. Many lifers want to argue that all abortions should be outlawed because it kills a precious life, ignoring the health and life of the one who is pregnant. I’ve mocked some of my colleagues for not being aware that they live in the 21st century, and while this century is still young, the problem of fatal pregnancies and fatal complications due to pregnancy still remains. Oh sure, let’s talk about that fluff piece that was on the 700 Club last year about the mother who went through with a pregnancy, that by all accounts should have killed her, and for her faith to Jesus she was rewarded with a star athlete of a son. The problem with this argument is that is says because one person jumped out of a flying plane without a parachute and survived the fall with a few scratches, therefore we all have those same odds of survival. With the rape issue, how many reading this feel rape victims should be forced to carry a child to term? Let’s dispel that myth that people choose to get pregnant, and that a true rape victim never gets pregnant. That’s crap and you’ll never get a real doctor to support those claims.