Culture Warriors on a Conservative Crusade

Obama's manifesto on contraceptives is giving Republicans something to crow about. 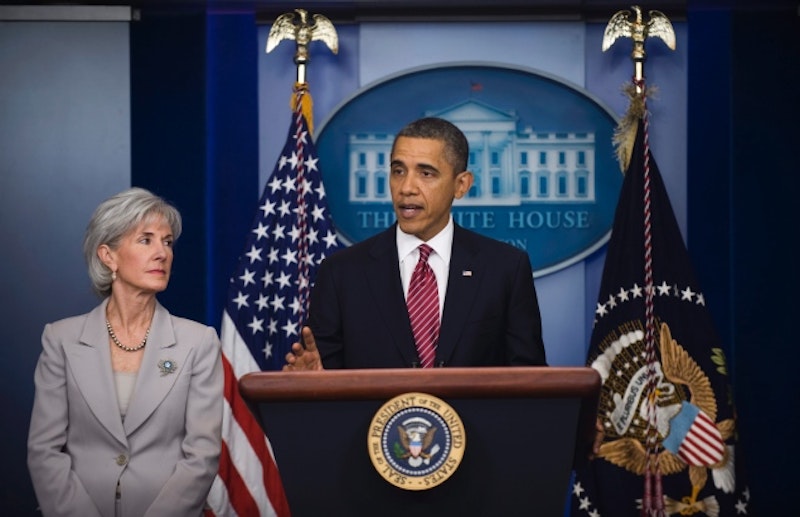 Culture-war conservatives had a great week. The news was all bad. Religion is no longer about redemption and salvation; it’s about sex and politics. And in politics, as in love, timing is everything. The two intersected last week after the Obama Administration issued its manifesto on contraception to roll over religious doctrine and belief. President Obama later was forced to backtrack because of the uproar, and his compromise failed to tamp down the noise on the right although it was generally accepted as a win-win adjustment. The social conservatives enjoyed resurgence over the narrow California appeals court ruling on same-sex marriage and the Susan G. Komen Foundation’s decision on funding Planned Parenthood. But the raptures reached full flower over Rick Santorum’s three-state victory in the Republican primaries. Whoever said politics and religion are a toxic mix got it absolutely right. But they’re also a unifying force when they blur into the new theology of abortion, gay rights and same-sex marriage.

In the joyous jumble that is politics, the Republican Party may be fractured but the conservative cause is alive and kicking moderate butt. Conservatives, for the moment, at least, are the Republican party. Forget about jobs. Forget about unemployment. Forget about the economy. They’re working in Obama’s favor. The culture wars are back and they’ve found a new home in the womb where conservatives and the Catholic Church can happily co-exist. But the Komen Foundation executed a hasty pivot, the Obama Administration appeared dazed by the swift reaction to its order and decided to compromise and opponents of gay marriage are convinced the Supreme Court will overturn the California ruling. And the Catholic bishops may have over-reacted to the birth control order. Taken together, the collision of events has given fresh impetus to social conservatives who had seemed silenced by the economic crises of the past five years. As Rep. Barney Frank (D-MA) observed in one of his memorable lines, “Republicans believe that life begins at conception and ends at birth.”

The Obama Administration lacks two very important qualities that are necessary for success in politics: cojones and cunning. So it is fair to ask just whose bright idea it was to issue a departmental order on birth control in the middle of a presidential campaign. It is equally fair to ask what all the fuss is about. The directive was straight-forward and not unexpected. Originally, it required all church-affiliated organizations, such as hospitals, colleges and universities and charitable services, to include birth control options and sterilization procedures in their health care plans. The stated purpose of the law is to enhance health care for women. The order specifically excludes churches and it was issued after a year of negotiations and research and includes a one-year grace period to consider implementation. The Catholic Church and other religious organizations went bonkers, claiming the directive betrays the First Amendment and tramples on their religious beliefs and church doctrine.

In Baltimore, Cardinal-designate Edwin F. O’Brien said the archdiocese would defy the law even if it means ending health care coverage for its 3500 employees. “The [Obama] Administration has cast aside the First Amendment to the Constitution of the United States, denying to Catholics our nation’s first and most fundamental freedom, that of religious liberty,” O’Brien wrote in a letter that was read to 153 Catholic parishes.

Nowhere in the protests has it been noted that 28 states have similar legal requirements on which the Department of Health and Human Services law was based and that many Catholic affiliates already include birth control coverage in their health care plans. Republican leaders in Congress have said they will move swiftly to repeal the requirement and plan to send the bill to the White House to further embarrass Obama. Romney called the directive an “assault on religion,” and Gingrich accused the Obama Administration of declaring “war on the Catholic Church.” Follow-up polls consistently show that a majority of Americans—as well as a majority of America’s 70 million Catholics—support the Obama Administration’s position. Support is especially high among women who gave Obama a majority of their votes in 2008 as did Catholics. (Catholics for Choice, a Washington-based organization, ran full-page newspaper ads supporting the Obama Administration’s law.)

The Obama accommodation, a nod to the voting strength and numbers of Catholics and their pattern of swing-voting between Democrats and Republicans, will allow Catholic affiliates to opt out of the law because of religious beliefs but would force insurance companies to offer free contraceptive care to their female employees. The compromise has been criticized as the same law under a different shell. The nation’s bishops tip-toed around the issue but called it “a step in the right direction.” But they later issued a statement saying the Obama compromise is “unacceptable… and must be corrected.” Planed Parenthood and the Catholic Health Association, arguably opposites in the controversy, both endorsed Obama’s revision.

The Komen Foundation decision to cut off funds for Planned Parenthood, long a target of culture conservatives, and concentrate on its primary mission of fighting breast cancer, produced another week of headlines as well as jubilation within the Republican right flank. This was a decision by Karen Handel, Komen’s public policy vice president, who had run as an anti-abortion Republican candidate for governor of Georgia. After a flurry of negative publicity, Handel resigned and the Komen Foundation announced that it will resume contributions to Planned Parenthood.

Finally, a federal appeals court in California ruled that Proposition 8, which bans same-sex marriage, is unconstitutional. The culture warriors are elated because the ruling will no doubt end up before the Supreme Court where the four conservative justices are often joined by the swing vote of Justice Anthony Kennedy to produce a 5-4 majority. Washington became the seventh state to adopt a gay-marriage statute which the governor, Chris Gregoire (D), is expected to sign into law this week.

The hot-eyes on the right are itching for a fight, and that includes the Roman Catholic bishops. They appear to have found their new champion in Santorum, the latest anti-Romney, who is about as fundamentalist a conservative as America breeds within its political ranks. To wit: Santorum, long dismissed as a serious presidential possibility, has picked up endorsements from Michelle Malkin and David Limbaugh, conservative writers, as well as James Dobson, the founder of Focus on the Family. And as sure as money follows potential winners, his fund-raising is enjoying a sudden surge and serious contributors are now joining his cause.

The net effect of the conservative commotion is to force Romney, to the extent that he is the nominal front-runner, further to the right in order to compete at the risk of alienating independents and centrist Republicans. And as he tacks to the right, Romney will have difficulty attacking Santorum with the kind of negative advertising that has become the trademark of his campaign and will further add to his rap sheet of being insincere and unauthentic. He’ll have to leave the dirty work to his Super PAC. Hear this: In his pandering speech to win CPAC’s support, Romney declaimed that as governor of Massachusetts “I was a severely conservative governor.” This from a governor who supported gun control, women’s reproductive rights and the nation’s very first mandate to purchase health insurance, policies that CPAC and the conservatives oppose.

The political writer Molly Ivans observed that “I long since decided that if the candidate doesn’t have some Elvis to him, he ain’t gonna make it.” Romney clearly lacks the Elvis factor. Culture conservatives had a great week. Santorum had a wonderful week. Obama had a face-saving week. The Catholic bishops are out on a limb. And Romney’s out in space hoping for an Elvis sighting.