Women's March on Washington Shows Left-Wing Devouring Its Own 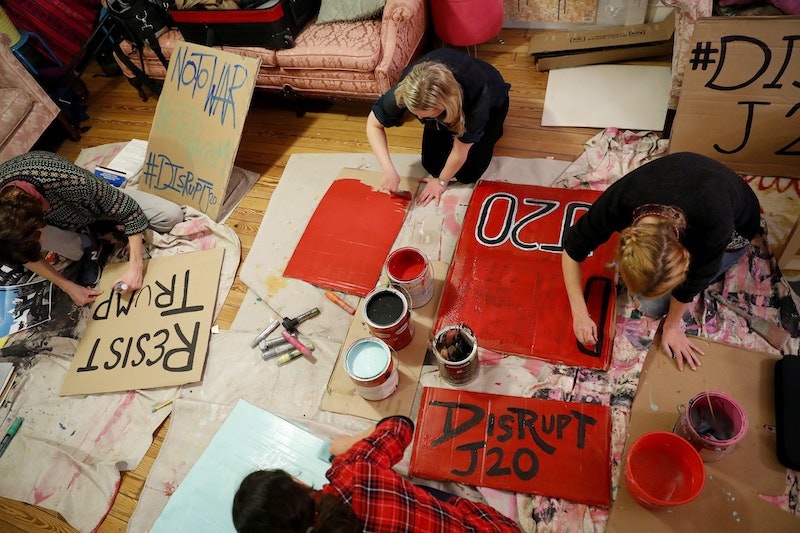 According to The New York Times, Jennifer Willis was planning to travel up to D.C. from South Carolina with her two daughters to attend the Women's March on Washington on the day after Donald Trump’s inauguration. She thought it’d be a great opportunity to stand alongside her sisters and protest Trump’s misogyny. Then she got a harsh lesson in how the political left conducts itself. One of the event’s organizers, a black woman from Brooklyn, lectured on Facebook in excluding language that white “allies” should listen more and talk less, adding, “You don't get to join because now you're scared too. I was born scared.” There're plenty of victimhood points for being born scared. Willis decided that she and her daughters might not be welcome at the gathering, so she cancelled the trip.

People may ask how the march became a racial affair, when it was supposed to be about all women, but that's how things work on the left, a movement so obsessed with personal identity that tangible goals and opportunities often slip out of reach amidst tribal infighting. The left devours its own in what often appears to be an addiction to identity politics they can't own up to, and therefore have no hope of treating.

The American left is poor at strategy. Demonstrations are clearly a numbers game. The power of the message is directly driven by how many show up. The main strategy for the Women's March should’ve been to maximize attendance, yet it wasn't. The national organizers deliberately set out to inject the racial issue from the outset, as well as that of undocumented immigrant women, in order to “take the conversation to deep places,” in the oddly-phrased words of Muslim intersectionalist Linda Sarsour, who led the successful effort to close New York public schools on Islam holy days, Eid al-Fitr and Eid al-Adha.

Sarsour is one of the four national co-chairwomen of the post-inaugural event. “Sometimes you are going to upset people,” she said of the intersectional approach, demonstrating her unsound grasp of strategy. The time to bring up the uncomfortable questions is after you've pulled off the successful march. After you've made your show of strength and unity and delivered a powerful message, then you address the dirtier, messier business of how to slice up the pie.

Sarsour encouraged the Brooklyn organizer to high-handedly scold potential attendees, thus turning them off. The “allies” she spoke of have just as much right to march as she does, and for that matter why is she even calling them allies when it's a women's march and they're women too? Maybe because categorizing them as mere allies marginalizes them, while simultaneously boosting your own status. It's a power game.

The Left just can't seem to help itself. It uses the victimhood index to determine who gets to speak and who must listen politely. The designated listeners are the ones who've been cowed into submission by all the privilege they're constantly told they have. The most guilt-addled comply meekly, but there are many others, like Jennifer Willis, who just decide not to show up. She probably doesn't want to expose her daughters to potential racial unpleasantness at their impressionable age. Maybe her daughters will one day decide to become Republicans. One could hardly blame them for not wanting any part of the perpetual identity-driven power struggle that consumes the left. To be a part of a political discussion not focused on individual skin colors, ethnic background, religion, ableism, etc. could be seen as refreshing in comparison.

The victim-centric philosophy currently embraced by progressives sets them up for a perpetual power struggle. Blacks, for example, outrank women on the victimhood index, so white women can’t be seen as legitimate leaders of the Women's March On Washington. Such an approach is doomed, as the most legitimate candidate for leadership (the one with the least privilege) would logically be the person who has the greatest conceivable combination of marginalizing characteristics possible in one individual. That would be something like a transsexual gender-neutral person of color with below average physical looks and a physical disability. Nobody could question this person without exposing their own relative privilege, including good-looking black, cisgendered, heterosexual women. This would not work out well.

Alienating the majority in favor of the marginalized works badly from a purely mathematical point of view. The only group you end up never alienating has almost no membership, while members of the largest groups have an incentive to drop out. The left has now reached the Kafkaesque position where, by their actions, they actually help achieve what they profess to be fighting against. If you told one of them that, they'd be flabbergasted. They think they're fighting racism by calling out as many people possible as racists, but that ended up fueling the backlash elected Trump. Trump's inauguration offers them the perfect opportunity to stand together against what he represents, but they're too obsessed with their addictions to make the best of it.