119 Reasons (or so) Why Donald Trump Should Keep Tweeting 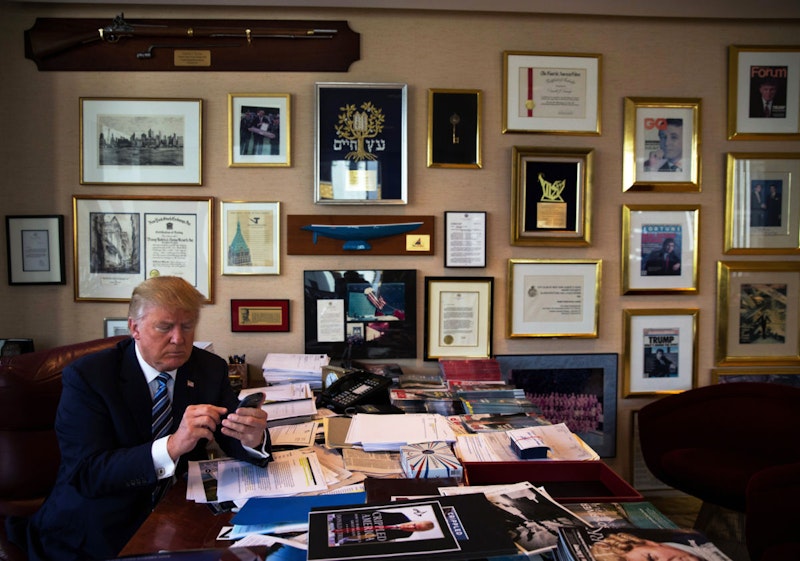 What epic poetry was for the ancient Greeks, the listicle is for us: the literary genre most central in forming our culture and most closely reflective of its values. And though the golden age of the listicle is over, I thought I'd try my hand at driving a renaissance of sorts. And if the listicle is our epic, the tweet is our lyric.

(1) Unlike Barack Obama (harhar!) Donald Trump is an American citizen. This means he can say whatever he damn well pleases. Rocking a Twitter feed with highly inappropriate remarks is the constitutional right of all of us. Let my people tweet.

(2) It may shock you to hear this, but at any given moment the President of the United States is a particular human being. Inauguration does not make this person into an office or function, much less an abstract concept or a god. Perhaps you think a president should say only what his staff tells him to, or that he shouldn’t have a distinctive human voice. It’s strange indeed, I agree, that Trump expresses himself as though he were a particular person: airing grievances, registering sudden enthusiasms, committing typos, for we demand a fantastic self-annihilation as the condition of the office. Trump ought to stay just as wildly particular as he actually is. I'd recommend that for all of us.

(3) Relatedly, many have argued that the way Trump tweets is beneath the high dignity of the office he will soon hold. Some think that Twitter itself is beneath the dignity of the office. People sneer at the character limit and the conventions for negotiating it, as though concision in all its pernicious forms should be expunged. Every time someone talks about the “the dignity of the office itself,” I’m reminded of Richard Nixon. This was his argument in a nutshell: I myself am a dignified office that you’re insulting. Attacks on me are attacks on “the very office of the presidency.” It's one thing for a president to use such a notion to try to survive, another for people to subordinate themselves voluntarily by joining an irrational cult. It's trinitarian with a cut-down to two: the President is two beings at once, inhabiting the same body, and these two beings have radically different and logically contradictory properties.

(4) I'll say it: @realDonaldTrump is the most entertaining Twitter feed in the brief history of the platform: wild, hilarious, unpredictable, and uniquely liable to make things happen outside the twittersphere. He’s a master of the form, as Sappho of the lyric. Only a dork would read Barack Obama's or Hillary Clinton's Twitter feed: every phrase focus-grouped, every character a collective production of the staff. Those accounts are bots. Trump tweets as extremely himself, and his self as he conceives it is, again, an actual individual human being. Times columnist David Brooks thinks that’s insane, but I'd suggest that the other way of thinking about is a bit more insane.

(5) It has been great to watch the outraged pundit explosion unfold day after day. Trump, according to the talking heads on CNN and The New York Times op-ed page, is actually oppressing whole groups, committing treason, revealing all his alleged pathologies, and he's doing it in 140 characters, every day, with great verve. Admittedly, the outrage has or soon will get boring and repetitive. But still, talking heads in a tizzy are better than talking heads muttering clichés in unison. Also, he forces such people to switch positions continually in order to maintain their blanket hostility. Pretty soon leftists will believe everything the CIA says, or celebrating the extremely excellent condition of black urban communities today. And indeed, all these people keep revealing their total linguistic incompetence, the sort that goes with perfect SAT scores: rigidity, principled opposition to linguistic creativity, a tin ear for jokes, an evident inability to interpret figures of speech or keep pace with improvisation.

(6) Trump's Twitter feed has “exposed” a lot of people, in the sense that Antonio Brown has exposed a lot of defensive backs. But it has exposed himself too, and I think we have a better idea of whom it is we have actually elected than ever before, even without the tax returns. Running for president, as Hillary showed, is usually an exercise in self-concealment, but Trump's Twitter feed is a constant self-revelation. You should be particularly happy about that if you oppose him; if you could interpret his feed competently, you’d know a lot about whom you’re up against. I think Trump voters felt, quite rightly, that they knew a lot about whom they were electing and had some human connection to him.

(7) Trump's Twitter account is one of many things that makes it hard for his staff and advisors to all pretend to agree about everything. He catches his own people by surprise. Some work it through better than others: Kellyanne Conway is a master of making it all seem to come out coherently. But this is another dimension of the dehumanization and super-humanization of political power: the whole campaign, or the whole executive branch, speaks with one voice, has one mind, a surreal collective consciousness in which everyone apparently has the same thoughts and repeats the same sentences. Violations of this fiction offend the same cultists of power: a situation of varied opinions and internal conflicts is too human or too actual to register the implacable one-eyed power they worship. Deal with it. "All of my Cabinet nominee (sic) are looking good and doing a great job. I want them to be themselves and express their own thoughts, not mine!" That's rather amazing, actually.

(8) People have predicted—vaguely—all sorts of disastrous practical outcomes from @realDonaldTrump; they try to gin up every stray remark about China or North Korea into an international crisis. Well, I haven’t seen much in the way of negative results yet. Even Wall Street has calmed down, and Trump's window for affecting stock prices with a tweet is closing. People who have some kind of actual stake have learned to interpret Trump's tweets as tweets. Anyone who spends much time on Twitter knows that people constantly overstate their views and their disagreements and write incredibly quickly and intemperately all the time. That will not bring the apocalypse, and on a good day it’s a swell place to play. I think probably almost anyone anywhere in the world is better at interpreting Trump's tweets than the American mainstream media; I doubt the Chinese communist hierarchy is losing their lunch over every casual hyperbole or exclamation mark or “Sad!”

(9) It’s remarkable that we’ve elected an irreverent iconoclast. Now, that’s going to be wildly unacceptable if the idols he's knocking over are your idols. People thought that when he tweeted at John Lewis ("all talk, talk, talk") it was just obviously inappropriate (and racist); they concluded that he must not understand who John Lewis actually is. But the transgressive quality of that tweet, I suggest, was completely intentional. He treated Lewis not as Martin Luther King (albeit without the oratorical chops, to say the least), not as a statue, not as an emblem, but as a particular partisan politician who'd attacked the legitimacy of his forthcoming presidency. In other words, he treated Lewis as what he actually is, not as a giant human-shaped balloon afloat in the ether of history.

(10) Trump delights in verbal combat, and thinks more in a given moment about how to make the most fun, devastating or outrageous move within the argument than about whether, on consideration, he’s saying what he actually believes. I also think that he’s quick to reconcile: it's a sort of sport, and a player might give an opponent a little hug after a hard game. In other words, unlike his opponents, I don't think he just dismisses people who disagree with him forevermore. I think he wants to play, and respects a good player. We haven't had a lot of presidents like that, but all things being equal it’s a refreshing change, and might actually constitute an effective governing style.

I urge the real Donald Trump to keep keeping it real. Now, I personally believe that the connections of his campaign to Russian intelligence will lead to his ouster. I think the Republican Congress is liable to end up impeaching him with glee. But until then, and after then too, I expect his feed to rock.