Media Ought to Swap Out Its White House Correspondents

Reporters and pundits aren’t up to the Trump challenge. 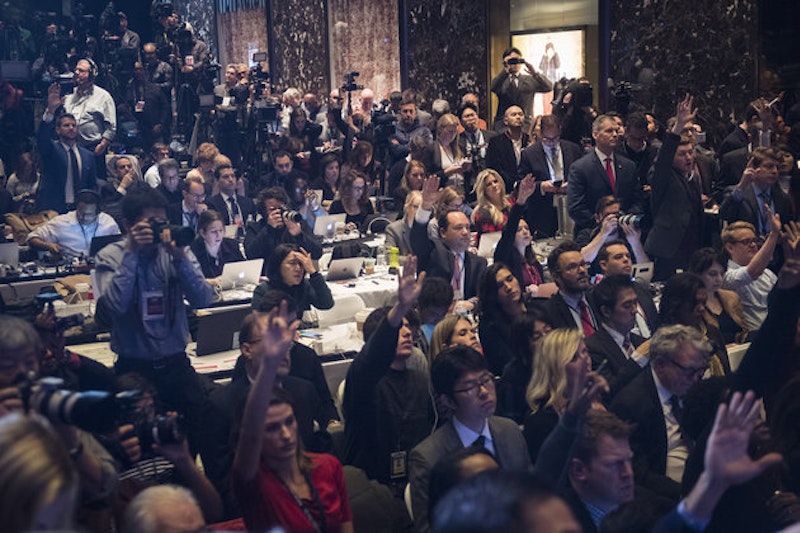 One of the most common journalistic clichés in the past month, as recently written by The Nation’s unctuous Eric Alterman, is “Fasten your seat belts, people. It’s going to be a bumpy four years.” It’s a legitimate question as to whether Trump will last four years—his conflicts of interest world-wide, past business indiscretions, bankruptcies, and other non-personal breaches of the law are fodder for serious investigative reporters—although a Republican Congress until at least the 2018 midterms should keep him immune. Surprisingly, Alterman makes a point, in disgust rather than praise for Trump’s befuddling the media, that’s escaped most of his colleagues. He writes: “[Trump’s Twitter feed is] filled with falsehoods and threats, it has become a crack-like addiction for reporters, successfully diverting attention from reporting about Trump’s corruption, incompetence, ignorance, dishonesty, misogyny, prejudice, and authoritarian tendencies, to name just a few of the new president’s charms.”

My Splice Today colleague Crispin Sartwell wrote a bullseye piece today about Trump’s masterful manipulation of Twitter, and how it’s left the status quo White House reporters in a puddle of mush. That’s in line with my contention that if major news organizations—TV, print, and digital—had a lick of sense they’d replace their veteran reporters and columnists, re-assign them to metro or foreign beats (at least those companies that can still afford foreign bureaus) and let an entire new team take on Trump’s White House. A fresh batch of correspondents, unsoiled by past relationships with political consultants, elected officials, and lobbyists, would likely not react to the latest Trump comment as something “that’s just not done.” I’ve (sort of) facetiously suggested on Twitter that, say The New York Times’ or Washington Post’s gardening and chess writers might be ripe for such a job; although I suppose it’s more realistic—in my idea that won’t happen—that seasoned local reporters get the assignment. I’d wager that a virgin DC press corps wouldn’t go ballistic at Trump’s threat to ban correspondents from asking questions at irregular press conferences, as the media in unison did when CNN’s Jim Acosta was shut down by Trump last week with a pretty funny “Don’t be rude, don’t be rude, your [TV station] is fake news." Besides, even if Trump effectively circumvents the media, it’s not as if—as noted above—there isn’t plenty for enterprising reporters to dig up on the most obnoxious, unorthodox president in our lifetime.

Not incidentally, Trump’s refusal to play by the media’s rules must have ex-presidents, who all despised the press, thinking, with a touch of jealousy, “Jeez, why didn’t I do that?”

Meanwhile, as surely as the Patriots are playing deep into the NFL playoffs, Times scold Paul Krugman ratcheted up his personal hysteria on Monday, pegging off Trump’s ill-considered tweets about Rep. John Lewis. As is now well-known, Lewis, and many other Democrats, won’t attend Trump’s inauguration of Friday because he’s an “illegitimate president.” I’ve no idea why watching or attending the festivities is such a big deal—I won’t tune in—and the fuss over Trump’s inability to attract pop groups or singers to entertain is just silly. Dubbing Trump “Dear Leader,” Krugman writes that calling the new president “illegitimate” is moral and patriotic. He off-handedly gives some credence to BuzzFeed’s “unverified” story from last week, by saying, “Are the lurid tales about adventures in Moscow true? We don’t know, but Mr. Trump’s creepy obsequiousness to Vladimir Putin makes it hard to dismiss these allegations.” Never mind that Krugman’s own newspaper refused to print the story.

Krugman rants away: “What this means is that Mr. Trump must not be treated with personal deference simply because of the position he has managed to seize. He must not be granted the use of the White House as a bully pulpit.”

I’ve no idea whether Trump reads Krugman—probably not—but if an aide did pass on the left-winger’s remarks, I’m sure a hearty laugh could be heard from Trump Tower to the Capitol. Krugman, like so many bitter Democrats, simply doesn’t understand that the rules have changed.