Will the Blue Wave Hit Maryland? 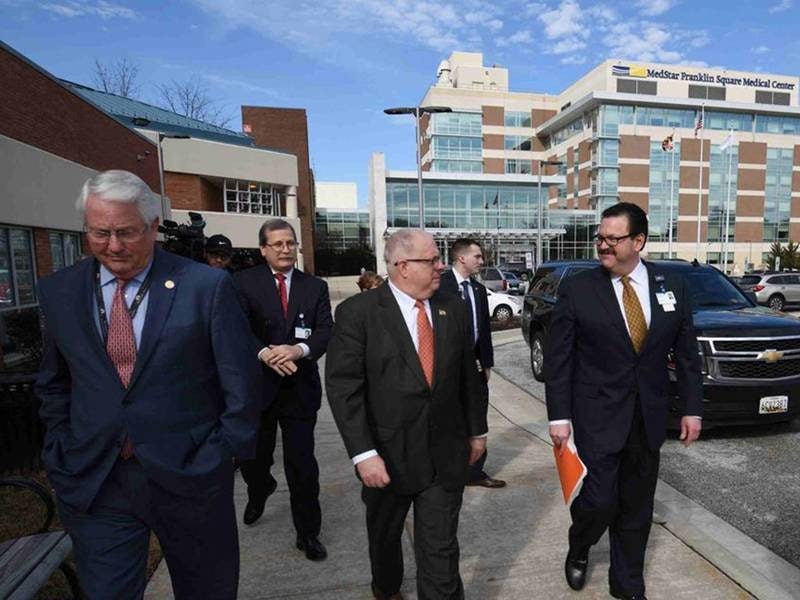 The only good thing that’s come from the Trump administration is that progressives are inspired to get more involved in politics. From Indivisible groups to progressives running for office, many on the left sense a “blue wave” will sweep across the nation in this year's elections, and take back both the Senate and House from the current Republican majority. Maryland is generally a blue state, but given that Republicans Gov. Larry Hogan and 1st District Rep. Andy Harris both have the fate of their respective seats in the hands of voters this November, many wonder if the blue wave will hit Maryland next.

Both Hogan and Harris have plenty of competition. Six Democrats hope to replace Harris’ seat in Congress: Michael Brown, Jesse Colvin, Allison Galbraith, Erik Lane, Michael Pullen, and Steve Worton. Galbraith was the first to announce her candidacy after the presidential election. As a single mother who also owns a small business, she finally got the chance to meet him and talk about his vocal opposition to the Affordable Care Act (ACA). When she asked Harris whether or not he’s opposed to rising health care costs for women, he replied, “I don’t think most people would mind if women paid a little more for health insurance.” Healthcare is a major focus in Galbraith’s campaign.

Pullen also jumped into action after Trump’s election. Early last year he created the Indivisible group Talbot Rising, “a nonpartisan progressive grassroots volunteer organization using the power of peaceful resistance, education, and issue advocacy for economic, social, racial, and environmental justice in Talbot County on Maryland’s Eastern Shore.” Their four areas of focus are equality for all, better protection for the environment, maintaining community, and affordable health care. A few months after forming Talbot Rising, Pullen left the group to run for Congress. His areas of focus are similar to Galbraith’s, but since he was a delegate for Bernie Sanders, the former Talbot County Attorney has gained endorsements from progressive groups like the Sierra Club and the Lower Shore Progressive Caucus.

In the gubernatorial race, the leading Democratic contenders right now are Ben Jealous and Rushern Baker. Baker, who has served as county executive for Prince George’s County since 2010, has won endorsements from former Maryland Gov. Parris Glendening, Sen. Chris Van Hollen, and The Washington Post. The Post says Baker’s “a pragmatist before he is a progressive,” he supports raising the state’s minimum wage to $15 an hour, but would rather increase funds for community colleges than make them free.

Jealous is the Bernie Sander of the race. The former NAACP president and CEO whose platform includes police reform and civil rights has gained support from Sanders, Rosario Dawson, and Dave Chappelle.

But will progressive politics and big-name endorsements guarantee success in November? A recent poll conducted by The Washington Post and the University of Maryland shows more Maryland Democrats support Hogan than either Baker or Jealous. Hogan’s moderate and reasonable for a Republican, especially on LGBTQ issues. He vowed not to overturn Maryland’s decision to legalize same-sex marriage, amended his first executive order to include legal protection for transgender people, and most recently signed a bill outlawing “conversion therapy” for minors. Hogan has also distanced himself from President Trump, which makes the Governor a topic of debate among Maryland progressives. While progressives would love to see Maryland become a bluer state, it won’t be the end of the world if Hogan gets reelected.

Unlike Hogan, Harris is notorious for his far-right politics and outspoken admiration for Trump. As a member of the Freedom Caucus, he doubts how much CO2 impacts climate change, would rather obliterate the ACA than fix its flaws, and told 1st District public schools to ignore Obama’s guidelines for letting transgender use bathrooms and locker rooms that match their gender identity. His right-wing extremism should be a red flag for Maryland Republicans, but unfortunately Harris has been the top pick for District 1 voters, beating both Democrat and Republican candidates since 2010.

Anything can happen between now and November. Given the popularity of both Hogan and Harris, their progressive rivals need to give Maryland voters valid reasons why their platforms are the best ones. It’s easy to get progressives riled up to make Maryland a bluer state, but it’s too early to predict whether they can reach Maryland Republicans.