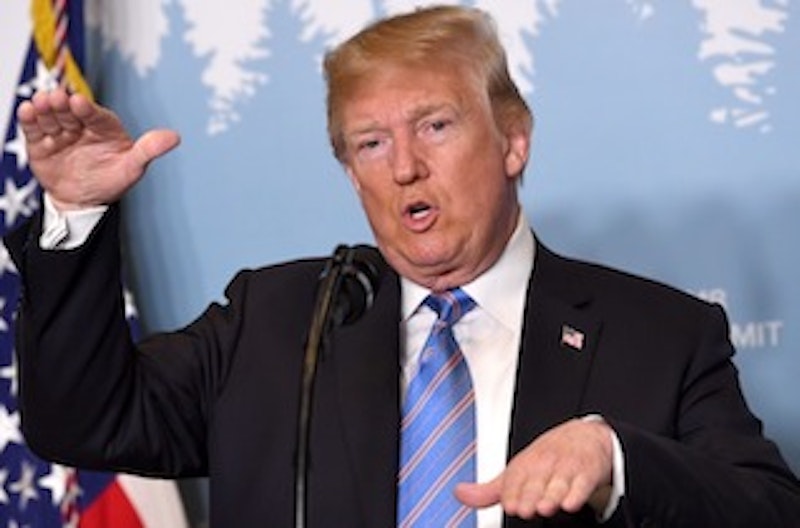 An acquaintance of mine just won a Tony Award, but you have to wonder how meaningful those awards are when at the same ceremony the thuggish Robert De Niro proved, inadvertently, that all it takes to get a huge standing ovation out of the juvenile morons who attend the Tony Awards is saying “Fuck Trump!” with no context whatsoever.

Meanwhile, at The Washington Post, the paper now dedicated per its slogan to proving that “Democracy Dies in Darkness,” a college professor asks the profound op-ed question, “Why Can’t We Hate Men?” How insightful! This is what elite education has come to.

But those of us keen to watch for strategic opportunities amidst the torrent of idiocy must avoid simply reacting to the establishment’s latest Tourette’s-like eruptions. That sort of idiocy-and-response game has gone on far too long, yielding nothing but angry YouTube videos.

Some of us knew back in saner times that you have to keep a much bigger, more long-term strategic goal in mind and keep looking for chances to nudge society in that direction no matter what cretinous trivialities currently occupy it. Right now, exhausting as it may be, that means in part watching which way our psychotic, idiot-man-child president lurches next and giving him and his shameless supporters an extra nudge in that direction in the event it happens, almost randomly, to be a good one.

Just such an opportunity may be upon us!

Trump’s unpredictable lurching will occasionally mean that he manages in spite of himself to adopt a surprising political position more far-sighted and more libertarian than those held by most of his supporters. In a tantrum at the recent G7 gathering of major economic nations, amidst what everyone expected to be the usual quota-decreeing discussions on tariffs, Trump briefly, perhaps petulantly, suggested the world should just get rid of tariffs altogether. Yes! Yes, it should!

If his supporters, including the populists and paleoconservatives, had a shred of intellectual integrity, they probably ought to be throwing fits over him saying that, since they just spent the past two years rationalizing Trump’s seeming-support for tariffs (shamefully, even former Cato Institute fellow Stephen Moore has turned populist on trade). From the perspective of a paranoid nationalist like Steve Bannon or Pat Buchanan, tariff talk is mostly a veil for far more primitive, nativist sentiments—a tax on imported goods just one more excuse to create a wall, this time a regulatory one instead of a physical one, between “us” and “them.”

Luckily, though, most Trump supporters have long since abandoned intellectual integrity. Notoriously, many will tell you that they don’t care what policy positions he, or they themselves, push so long as those positions seem to confuse and anger their political rivals. Well, great—so let’s really, really piss off all the regulators, taxers, mercantilists, and elite dealmakers of the world by abolishing all tariffs. Now’s the time. Trump has created an opening—and the other world leaders were too startled to conjure up counter-arguments.

This could be one of those moments—like Reagan and Gorbachev almost agreeing to abolish all nukes at Reykjavik—that at least shows a fleeting glimpse of how things should be, even if it takes a few more years to achieve it. If this is a populist fit of pique, I say give us more like it! Nothing undermines those dreaded globalist elites like taking away their power to say who can sell what where when, so (especially if you are some sort of “conservative” who vaguely recalls having championed capitalism prior to about three years ago) ditch tariffs. Then, for an encore, please ditch all taxes and regulations in general. If all of us who care about markets push hard in this direction, now could (quite unexpectedly) prove the right strategic time.

I’m less optimistic the populist mood can be jiu-jitsued into a surprise push for relaxed immigration controls, but there may be a strategy available there as well (so long as everyone is assured outright terrorists and gang-members will still get arrested). Just as the Trumpists retain some trace memories of loyalty to capitalism, they retain a healthy fear of the state from the days when they weren’t the ones running it. That paranoia can surely be used to get some of them to admit that the border patrols and immigrant roundups they’ve unleashed are every bit as ugly as the handiwork of the ATF or, say, the FBI the populists currently fear (since it’s attacking their beloved president at the moment).

Remember your conspiracy theory roots, populists! You feared just a couple of years ago that Walmarts across the land were secretly being turned into massive detention centers—and it turns out you were right! Indeed, a Democratic senator was just thrown out of a Walmart in the Pacific Northwest by security guards for trying to poke his nose in and see what sort of conditions prevailed there. Horrifying! Except these makeshift prisons aren’t being filled up with militia members and Rush Limbaugh listeners. They’re filled with immigrants who, like savvy free-market economists, saw that there are more jobs northward in the U.S. than back home in Mexico and parts farther south—and, without waiting for permission from federal bureaucrats, brought their kids with them, not expecting the U.S. regime to be so anti-family as to split them apart.

Do we so hate job-seekers and capitalism now that we want to empower the jackbooted thugs of the federal government’s secretive security apparatus? Do we want the Walmarts to become the long-prophesied “FEMA prison camps”? I don’t want a world where the socialist superstate taxes entrepreneurs into oblivion either domestically or at the border, and I don’t want SWAT teams breaking down the doors of people’s homes whether the SWAT teams are coming to seize guns or David Hogg, pot or empanadas, profits or cryptocurrency software.

The near future will be one of populist whims and leftist fads, which is unsettling, but if we all agree to lean at every opportunity in the direction of tolerance, free markets, secure property rights, and anti-authoritarianism, we may yet emerge much better off than we were. Whether that means sucking it up and applauding one Kim if that nudges him to release people from North Korean labor camps or the other Kim when she (and the NFL) push for releasing non-violent prisoners in the U.S., we may yet succeed in wrenching a sustainable free-market anarchism out of this bizarre era of free-associative chaos.