We're Not Alone in This Fight 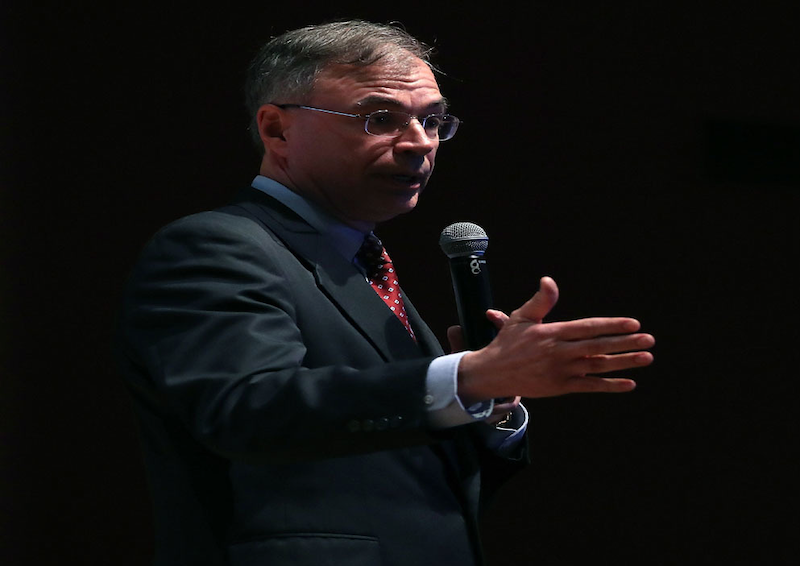 Besides having anxiety attacks over whether or not people will accept me as a non-binary trans person, I also had them all last week in trying to decide if I should attend a town hall hosted by Republican Rep. Andy Harris (MD-1). On the one hand, this would be a chance to make my voice heard and push for change. On the other, the Eastern Shore doesn’t take kindly to progressive queer trans people, so I was afraid I’d get hurt. I texted my friend Jim—a seventysomething hardcore progressive anti-theist who doesn’t take shit from anyone—to come along with me, and he agreed.

We arrived at Chesapeake College just after five to see a huge line outside. Jim and I chatted with people from Talbot Rising who were holding protest signs, which meant we weren’t able to get seats inside, so we stood in the back of the auditorium. I had a question for Harris written down on a piece of paper, but unfortunately missed the deadline to submit it.

The meeting began with a pastor reciting a Christian prayer (roll of eyes), followed by the Pledge of Allegiance (another eye-roll since it included “Under God”). Then Harris came onstage. He began with a short slideshow to make everyone believe that Obamacare ruined America, but the audience wasn’t having it. They booed, yelled, and demanded Harris skip the slideshow and go straight to the questions. At one point he told one woman in the audience, “Ma’am, if you don’t stop yelling, I’m going to ask you to leave,” but he quickly shut up when we all yelled in unison.

Finally, it was time to answer questions. The moderator, a local businessman, randomly drew audience-submitted questions from a box and read them. When asked about Planned Parenthood, Harris said we should support independent clinics that provide female health services instead of giving taxpayer money to “fund abortions.” We booed in response, and I shouted from the back, “Choice! Choice!”

Harris was also asked about climate change. He responded that yes the climate is changing, and CO2 has something do with it, but “we’re not sure by how much.” That, too, met with boos from the audience. Things really got heated when Trump’s wall was brought up. Harris said we needed stronger borders, if not a wall, and the audience responded by chanting, “No wall! No wall!” (To be fair, there was one Republican who yelled, “Build it!”)

After the meeting, there was a small anti-Harris rally outside the building. We stood around the fountain and chanted, “Hey hey, ho ho, Andy Harris has got to go!” Someone passed around a microphone for anyone who didn’t get the chance to say something during the meeting. After a few young women expressed their anger, I took the mic.

“I’m transgender,” I shouted, “and I’m scared shitless of Andy Harris and Donald Fucking Trump!” The small audience cheered. “As you may know,” I continued, “last year President Obama released a directive for schools to allow transgender students to use the bathrooms and locker rooms that matched their identities. Guess who said Maryland should ignore it. None other than our very own elected representative Andy Harris! I don’t know if you know this, but studies show I’m more likely to be hurt in a public bathroom than to hurt anyone else.” They cheered again as I offered the microphone to someone else.

A woman approached afterwards to thank me. She said she recognized me after I wrote a letter to The Star Democrat voicing my support for a trans boy who was suing the Talbot County school board for not letting him use the boys’ room. Turns out she’s his mom! I told her about an LGBTQ support group in Easton that’s starting soon, and we traded numbers. I also exchanged info with the people from Talbot Rising.

Jim and I drove home in silence processing everything that just happened. We thought we were alone being progressives living in conservative Easton, but were wrong. If anything good has come from Trump’s presidency, it’s that people are finally coming out and working together to resist the current administration. I just hope the passion and energy of that night continues to the 2018 elections.