Brain Droppings and a brain fart. 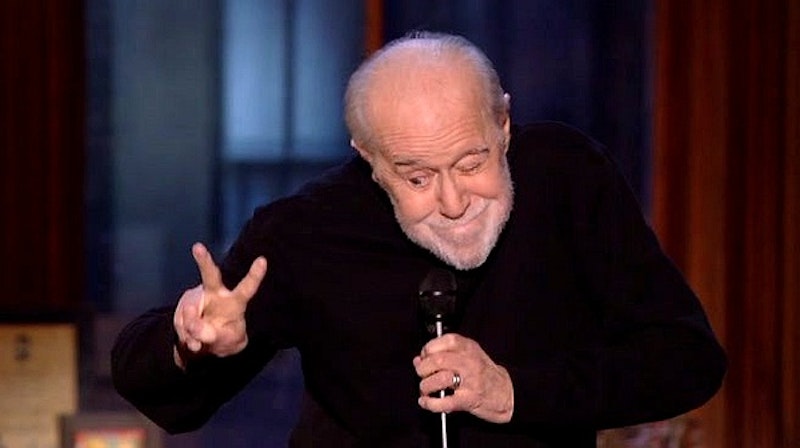 “The great tragedy of George Carlin’s life was that he stopped being funny before he stopped performing comedy.”

That’s the verdict of National Review’s Kevin Williamson, who recently trashed the late George Carlin in a piece trashing another comedian, Samantha Bee. Williamson argues that Carlin stopped being funny towards the end of his career, while Samantha Bee has never been funny.

Williamson’s cheap shot at Carlin is another reminder that conservative journalism suffers from envy of the cultural left, as well as a laziness that prevents writers from doing the reporting that can bring perspective to their subject. To say that Carlin had lost a little of his edge right near the end of his life is a “great tragedy” is like saying it’s a great tragedy that Yankee star Alex Rodriguez struck out in one at-bat during his final game.

George Carlin (1937-2008) made more than 20 albums, 14 HBO specials and more than 100 appearances on The Tonight Show. He wrote three best-selling books, including the wonderful Brain Droppings. Carlin’s final HBO special, It’s Bad for Ya, was recording in March 2008, just three months before Carlin’s death in June. According to Williamson, It’s Bad for Ya “runs for 67 minutes, during which Carlin never quite manages to say anything that is funny—it is not even obvious that he is trying to.” More, Carlin is “angry and bitter, though in a way that’s more like George Carlin doing a George Carlin impersonation than anything suggesting genuine rage.”

Despite what Williamson says, parts of It’s Bad for Ya are really funny. Williamson then scolds Carlin: “What would he be raging about? He lived a life of privilege and ease: educated privately in Christian schools, sent to a beloved summer camp in New Hampshire (he was so fond of it that he had his ashes scattered there after his death, a strange gesture for a man who claimed to reject superstition), and sustained by a 36-year marriage that ended with the death of his first wife—all while he grew immensely wealthy mocking the bourgeois values and institutions that shaped and sheltered him. He was, in that sense, a typical product of the 1960s counterculture.”

Carlin was raised in Morningside Heights, New York. His mother was a secretary and his father was an Irish immigrant, the advertising manager for The New York Sun. Carlin learned his love of words from his mother and his cast of characters came from the people he encountered on the streets of New York. He attended, and got kicked out of, Catholic schools, including Bishop Dubois in Harlem. He then joined the Air Force, where he was court-martialed three times. Carlin claimed that his father was abusive.

After the Air Force, Carlin he did something Williamson has never tried. He took a stage and made a room of strangers laugh. This isn’t easy. I’m again reminded of the irony of foundation-salaried, family-connected and school-to-pundit conservative panjandrums lecturing entertainers who’ve taken huge risks, and made their millions not by taking the people’s money to launch a website but through hard work. Carlin and partner Jack Burns played beatnik coffeehouse and created The Wright Brothers, a morning show on KDAY in Hollywood. In the 1960s, Carlin began appearing on television variety shows, where he played various characters: The Indian Sergeant, dumb disc jockeys, and Al Sleet, the Hippie-Dippie Weatherman.

Carlin then recreated himself as more of an edgy, free-thinking comedian, becoming famous for his routine about “Seven Words You Can Never Say on Television.” In 1972 Carlin was arrested for doing the routine at the Summerfest in Milwaukee.

You’d think that Williamson, who recently got fired from The Atlantic for being a conservative, would appreciate Carlin’s defense of free speech and free thought. In his career Carlin blasted political correctness and environmental hysteria. Williamson would’ve known this had he done some simple research.

He’s also wrong about Samantha Bee. Bee is largely a shrill leftist scold, but can also be funny. In 2014 she did a risky and inventive bit that mocked the Fox show The Five via a “one woman show.” The routine worked on many levels—as political criticism, a parody of the pretentiousness of one-person shows, and as slapstick.