No wonder there's a Klonopin shortage. 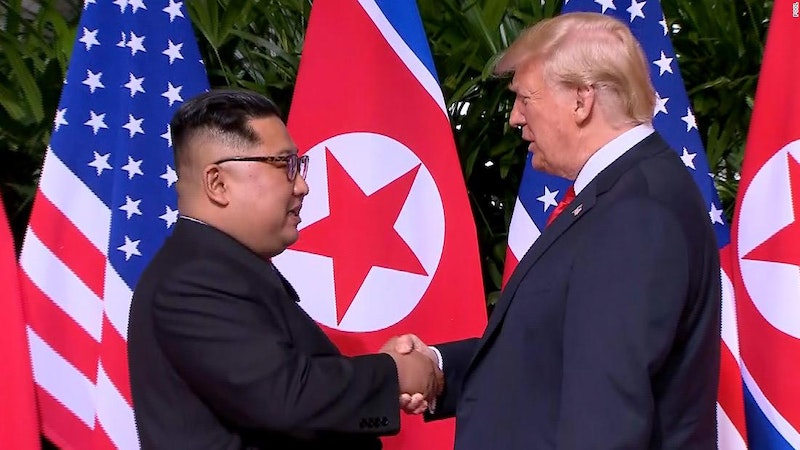 The New York Times editorial board didn’t have much to say in an op-ed headlined “Trump Gushes Over North Korea.” After making fair points about the disparity in Trump’s rhetoric regarding the Iran Nuclear Deal and a possible “denuclearization” of the Korean Peninsula, the conclusion: “Mr. Trump now fully owns this issue and seems seized with the need to resolve it peacefully. That is to the good. It will now be the difficult work of his negotiators, led by Secretary of State Mike Pompeo, to reach a carefully drawn, detailed agreement on the questions that truly matter, including the timing and scope of denuclearization and the future of the missile program.”

That is not an opinion. That is a middle-school book report level summary of the situation, amounting to “it’s up to him now to do a good job!” Who else is going to denuclearize the Korean Peninsula, Mr. Ed? I have no illusions or much optimism about this “comprehensive” deal being at all comprehensive, or that this meeting was anything but symbolic. Nonetheless it is historic, and regardless of how incompetent and repulsive Trump is on a daily basis at home and abroad, conceding that this was a coup for him should be an easy thing.

Apparently not: centrists, liberals, Never Trumpers and some leftists refuse to acknowledge when our broken-clock President is right, because to do so would be to give him a “win,” which is a practical concern insofar as his chances of reelection go, but even more than that, they just can’t stomach ceding anything to someone they find so objectionable and abhorrent.

The level of reflexive and visceral hatred of Trump from the left mirrors the right’s psychotic and deranged attitude towards Obama throughout his presidency. The driving force of their respective rages are clear: the right hated Obama because he was black (and possibly Muslim), while centrists and the left hate Trump because he’s openly xenophobic, racist, sexist, proudly ignorant, boorish, and incompetent.

It’s obvious which side is justified in their distrust and their hatred—the left doesn’t need to concoct conspiracy theories about Trump’s birth certificate or his possible side job as a transgendered prostitute, and no one (as far as I know) has claimed that Melania is actually a guy named Mel, with very strong arms. I hope it’s clear we’re operating under the conclusion that Trump a worse president than Barack Obama. We needn’t count the ways, they scream in our faces every day.

But I remember in the early morning hours of November 9, 2016, when Trump’s election still made the future look completely blank, a uniquely terrifying sense that the ground had given in and anything could happen. People were already hash-tagging #NotMyPresident, appropriating an anti-Obama Tea Party slogan without any sense of irony or self-awareness.

In the early hours of that day, I wrote: “Just as Obama’s election was an affront to whiteness and paranoid xenophobes and all the upper middle class shy voters in between, Trump is a national embarrassment and a horror for all the reasons you already know. It’s not a question of which reality is correct or more valid—the problem is that we’re a country operating on the basis of two diametrically opposed realities that bear little resemblance to each other.”

I don’t want to see Trump re-elected. I think he’s going to run again, and I’ve finally convinced my dad that Trump has begun to dig a job that was so obviously overwhelming and often boring to him in his first year. He’s making history now. Laying on the horn and opposing everything he does just because it’s Trump is exactly what bitter battle-axes did when the black guy was in charge. Besides, Trump meeting with Kim Jong-un does not “legitimize” North Korea. It’s already legitimate.

I don’t understand that line of attack when Bill Clinton, George W. Bush, and Barack Obama (and Trump) regularly met with the despots that rule Saudi Arabia, a country that we do lots of business with and isn’t much lower on the list of human rights’ violations than North Korea. Shut up and hope for the best.