The World Order in Danger

There’s no downside to Trump freaking out traditionalists. 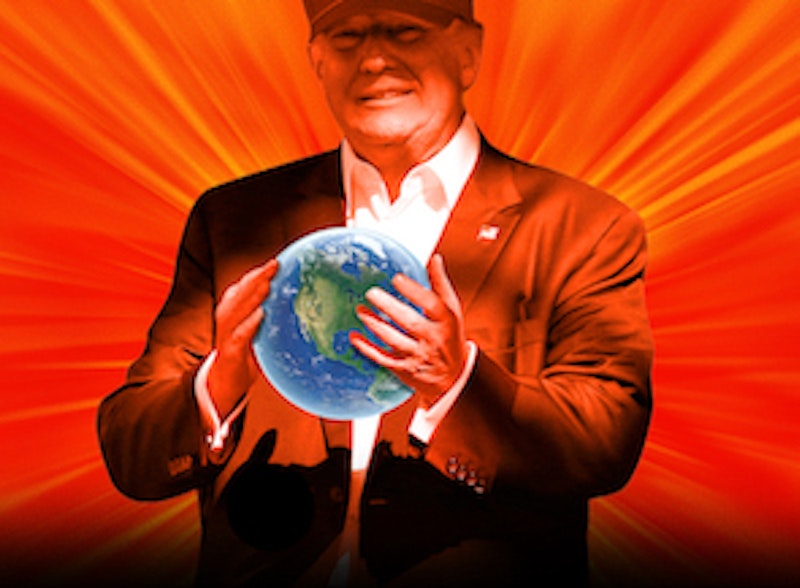 Perhaps you didn’t realize that we were living under a world government, until Donald Trump started messing with it and everybody freaked out. “In Trump,” warns a Washington Postheadline, “some fear the end of the world order.” The reporter, Karen Tumulty, explains the world order (WO) as “the Western-dominated order that has ruled the world for the past seven decades.” She continues by quoting “officials,” speaking for some reason on condition of anonymity: “Trump cares very little about the traditional world order.” The Irish Times describes Trump as “a threat to the world order,” while the Independent attributes the claim that Trump presents a threat to the WO, not to “some,” or to “officials”, but to “experts.”

We might ask whether there’s a “liberal” order that has “ruled the world” for 70 years, and if so whether it’s done a good job. The phrase has a distinguished history. In the 1970s, for example, conspiracy theorists asserted that the WO was imposed and administered by Henry Kissinger and the Trilateral Commission. This style of theorizing was a fringe view at the time. Yet it’s now the conventional wisdom of officials and experts and the Post that the world has been ruled all this time by people like that, who apparently set the “norms” for world trade that have been scrupulously observed by everyone since 1946.

Continuing through our brief etymology of the WO, George H. W. Bush welcomed a New WO after the first Gulf invasion and the fall of the Berlin Wall. It’s hard to tell if the NWO was the same WO that the Post thinks had already ruled the world for 45 years before that, or just what the relations of these alleged WOs might be. In response, Marxists and post-Marxists started talking about “the neo-liberal order” (NLO), which might which might also refer to the WO, but definitely refers to the NWO, or international capitalism, or international state-corporate configurations, or interlocked monetary and trade policies and activities, trans-national economic organizations such as the World Bank, the WTO, and EU. Probably the Trilateral Commission is still ticking along underneath, running the whole shebang.

And perhaps all the conspiracy theories hook up nicely, as one way that Trump is attacking the WO is by attacking the American “Deep State,” or the surveillance machine that helps constitute the police force for the WO. Again, there appears to be no such thing until it’s attacked, whereupon it’s suddenly speaking with many voices on television, sounding like James Clapper and for that matter Jim Acosta. One WO-violating feature of Trump’s approach is how explicit his attacks are and how they are launched: Trump just starts insulting people on Twitter, whether it’s Justin Trudeau or James Comey.

And as much as anything, Trump allegedly endangers the alleged WO by the way he talks. He endangers the WO by the way he talks about and to Kim Jong-un and Vladimir Putin, for example. There’s no telling, at this moment, how much of this—the protectionism that really does have establishment DC in a panic, or the wild swings in rhetoric engulfing American foreign policy—may end up having good effects. But Trump’s approach makes some concealed facts apparent and raises fundamental questions. It’s dangerous in certain ways, though these are exaggerated; it’s also invigorating, and opens up new possibilities in a world that’s often seemed stuck in an immovable hierarchy. It’s been a long 70 years.

First, Trump’s radical thrashing about shows that people—“experts,” “unidentified officials,” journalists—do think that there is a world economic order, despite all the rivalries, or the obvious differences in interests between people in, for example, Brazil, Uzbekistan, Beijing, and Cleveland. They think that the world is administered by the G7, or that, as Trump said sarcastically as he headed to Canada, “We’ve got a world to run.”

It’s surely a miserable simplification to believe that there has ever been any such single world economic order, or world state, and so it’s surely a miserable simplification to think that it’s disintegrating right now due to Trump’s shenanigans. The world economy has always been multi-polar and a site where many interests are contested and none is flatly dominant. But to the extent that there really has been a world economic order, it has presided, for example, over long-term increases in inequality, or the immiseration of the third world for the benefit of the first. At a minimum, the effect of whatever degree of order the world in fact displays have been highly equivocal, and some people have done much better than others. In particular, the G7 have done alright for themselves, though the populations of each of these countries is also divided between those who have benefited from the WO, such as it is, and those who have not.

Some of Trump’s iconoclastic or impulsive moves against the alleged WO, or the people who understand themselves to be the WO, give you the sense of possibilities opening up, just because Trump is ignoring how things have long been done. He suggested, for example, that all countries should remove all tariffs on all goods. That’s an interesting notion to throw into the hopper, and makes you realize that a lot of what Trump is doing is just posturing for negotiation, but in a far more dramatic way than the last dozen presidents would have countenanced. He just doesn’t appear to harbor the same assumptions that the people who think they have a world to run have brought to these matters for 70 years. Perhaps many of these assumptions are false, however.

And then the way he has dealt with Kim Jong-un has been entirely unconventional: threatening and insulting him, praising him and offering all sorts of rewards. The idea of the summit itself disturbs the world order. Lord knows how it will all come out, but it has not, so far, made things worse. And it represents the biggest change in the Korea situation in a couple of generations. I think these were cases in which Trump played the policy direction by ear, or improvised the stuff on Twitter. This has proven remarkably refreshing, even if it also presents dangers.

There’s a reason that the WO formulation is popular among conspiracy theories; the phrase has real creepiness, which makes it odd for The Washington Post, the WTO, Justin Trudeau, or James Clapper to defend. They’re definitely hoping to freak you out by formulating it this way: “reality itself, the WO, is breaking down!” But it’s not absolutely obvious that, if such a thing exists, it should not be smashed, though one might not like the smasher in this case. At any rate, people in particular who regard themselves as being on the left might think several times before they directly portray themselves as the representatives of the WO that has ruled the globe for 70 years. If that’s who they are, they’ve got a lot to answer for.