From NASA to CNN, occult influence. 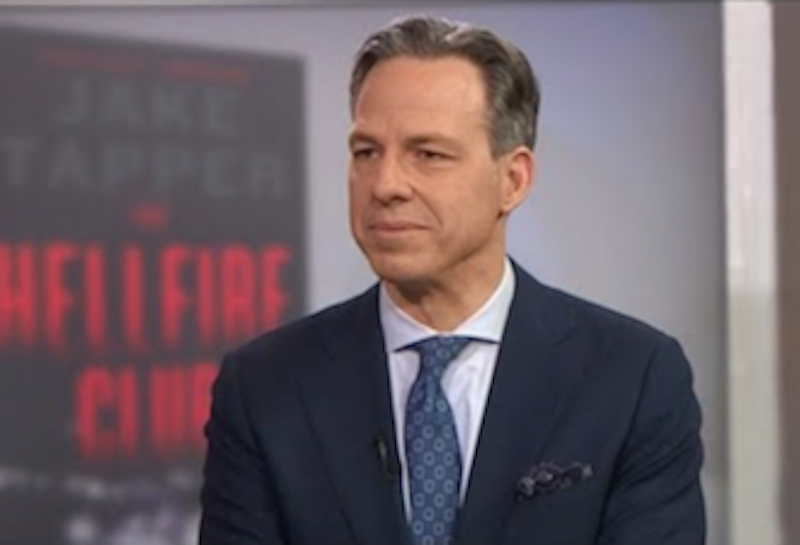 CNN reporter Jake Tapper has written a conspiracy-theory novel called The Hellfire Club. That’s surprising, given that he’s the sort of sober, centrist establishment type who usually pooh-poohs conspiracy theories in real life. He and his wife have even called infamous Comet Pizza one of their favorite DC restaurants without much apparent fear of adding fuel to the conspiracy-theory fire around that place.

I was rooting for Tapper most of the way as I read his novel, impressed that he’d done mountains of historical research on little architectural, political, and pop-cultural details to capture the Washington, DC of 1954. A major turning point in the plot occurs during the infamous anti-comic book hearings held in Congress that year, as important a clash between government and nerd as ever humanity has known. Tapper’s protagonist is a freshman member of Congress pressured into participating in the silly hearings—and pressured by secretive congressional powerbrokers and unseen organizations into several things he doesn’t want to do.

I was on the protagonist’s—and Tapper’s—side even as the list of villains applying covert pressure began to look more and more like a predictable checklist of things mainstream liberals hate: the censorious anti-comics senator, an infamous Red-baiting senator, an industry man out to stymie a rival, the cagey military-industrial complex, evil chemical companies, farmers, miscellaneous racists. No alien abductions or mind control experiments here. The FBI and CIA end up looking pretty good, in keeping with current liberal thinking. Media bias is briefly mentioned as skewing in the Republicans’ favor, at least back at the time. I was still rooting for Tapper even when the protagonist and his wife were emotionally reconciled by their unexpected joint effort to rescue a drowning pony (really).

But then, as sometimes happens, the book goes from seeming set in the 1950s to seeming set in a 1950s piece of schlocky pop culture—specifically, some trashy serial about G-men and gangsters, and suddenly it’s all good guys being bound and gagged and bad guys’ noggins being knocked into historically-apt statuary and things getting way too Dan Brown with forgotten documents in the Library of Congress and a symbolic painting. Then it’s all over in a torrent of expository dialogue, leaving only the wearying sense there might be a sequel someday.

Despite the novel’s problems, I’m pleased, at least, that it captured the sleaziness of politics, the logrolling and backscratching—and the way the good and the evil become incestuously bound through politics. We are, after all, living through a period when conservative patriotism is being deformed into trade protectionism calculated to please certain corporations and key constituencies, a transformation happening what seems like mere minutes after conservative patriotism looked for a fleeting moment as if it might no longer be deformed into militarism and religiosity.

That increased protectionism has quickly been followed by other nations’ retaliatory tariffs against, for instance, U.S. aluminum and maple syrup. How disappointing. Then again, we’re seeing FDA rules loosened up, so liberty wins some and loses some. The good and the bad, bundled together.

There have been weirder blends of good and evil in America’s past, though, and another mid-century-set tale of government being influenced by secret societies—this one more overtly fact-based—comes to CBS All Access on June 14: Strange Angel. It’s the real-life story of Jack Parsons, a founding U.S. rocket scientist to whom NASA partially owes its existence but also a Satanist.

Parsons was in fact the chief sponsor of arch-mystic Aleister Crowley in Crowley’s final years, as well as a friend of L. Ron Hubbard, who ended up running off with Parsons’ wife and angering Crowley by going into the Southwestern desert with Parsons and performing ostensibly alien-summoning rituals cribbed sloppily from Crowley himself (America’s 1940s wave of flying saucer sightings began almost immediately thereafter, coincidentally or not, and in short order Hubbard’s creation of a religion). This science-Satan tension, and the sex-magic rituals Crowley encouraged, should prove fodder for surreal drama, and it makes sense Ridley Scott is executive producer, given his gnostic penchant for things like ancient-astronaut theories and the veiled “alien Jesus” thesis in Prometheus.

It’s not as if Parsons was the only occultist involved in the prehistory of NASA, either, since the U.S. imported multiple Nazi rocket scientists immediately after World War II, plunking some in intelligence or science work even before the war was over. Might they have brought some neo-pagan Nazi mysticism with them into either field?

I’m no longer confident that would be much stranger than mainstream science, what with Nature last month reporting confirmation of what Einstein called “spooky action at a distance” (particles’ quantum states in one location affecting those in another faster than light could travel between them, even over planet- or galaxy-sized distances) and an article this month from Scientific American losing no time in rushing to the conclusion that mind is fundamental to reality and nothing exists until we observe it.

I’ve always thought that was a line of belief for narcissists and fact-hating relativists, and I’m sticking to that view until publications like Scientific American demonstrate their philosophical standards are as high as their experimental methodological standards. They don’t quite wrestle thoroughly with the core issues. We’ve known quantum mechanics is weird for a century now, and this most recent experiment—despite involving the simultaneous participation of hordes of amateur and professional participants the world over to make the experiment more fun and literally more random than ever before—doesn’t really make it any weirder.

I think the people rushing to conclude mind is all (instead of merely that the speed of light isn’t absolute) have a hippie-mushy cultural bias and need to calm down. And as long as the world remains full of sinister minds like those of Crowley, DC powerbrokers, and scientists like the ones at MIT who recently programmed an A.I. to think like a sociopath, one must suspect a world shaped at a fundamental level by consciousness might not be so pleasant anyway. Maybe we do already live in that hell, though.