Will Romney Go Bulworth During Last Days of Campaign?

Pro-Romney hordes willing to live with pretty much anything their candidate does. Anything. 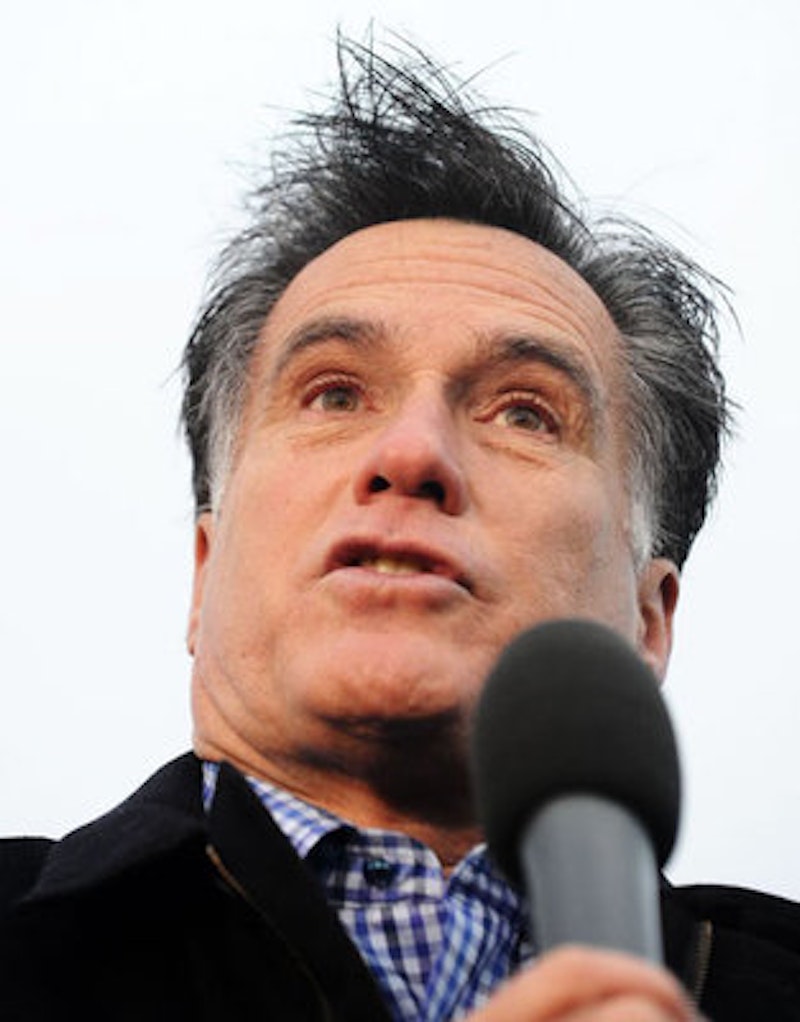 Just the other day there was this, and then yesterday, this. But even way prior to that, there’s been a constant flow of televised evidence supporting the assertion that Mitt Romney is something less than human: the frequent, impassioned flip-flopping on every political issue known to man; the tone-deaf, almost accidental class warfare; the coked-up first debate performance; the 47% thing—the list goes on and on, the hits keep on coming. What’s fascinating is that Romney supporters don’t care: they’ve got a living, breathing, sentient thing going up against the President, and that’s all they care about.

It just occurred to me today that Romney could, in the next couple days, do or admit to having done in the recent past any number of despicable, uncouth things, and the same people somehow remain bound and determined to cast a ballot for this disingenuous weathervane would still support him, would simply shake off whatever horror they were confronted with as “liberal media bias” even if confronted by indisputable evidence to the contrary.

In this spirit, here are 17 crazy stunts Romney can viably pull between now and Tuesday without any meaningful damage to his implausible—yet frighteningly legitimate, at least for the next 96 hours or so—political ascendancy.

1. Blowing whistle on self by sneaking own lifetime financial records to Wikileaks.

4. Prefacing attempts at relating to average Americans with harrowing personal stories of do-or-die cannibalism while on European Mormon mission.

7. Tweeting shout-outs to the Koch brothers, but getting all confused and conflating those shout-outs with popping off at “Democrat haters,” dismissing them for issuing “wack albums that brick on Koch Records.”

8. Rolling up to campaign headquarters full of overworked volunteers and saying stuff like “I bought a Honda hybrid for each of you, look under your chairs for the keys” but then being all “ha, gotcha suckers.”

9. Frank, no-foolin’ straight talk about how he wholeheartedly endorses Chris Christie for president in 2016.

10. Impromptu drop-in at Zuccotti Park to “see how the other half lives” and “find out what this whole Occupy Wal-Mart movement’s about.”

11. Riling up a rowdy crowd of supporters at an open-air gun show, then grabbing a loaded AK-47, randomly taking out tons of bystanders, finally revealing self as The Terminator.

12. Staging simultaneous baby-seal clubbing rallies up and down Alaskan coast.

14. Going Beetlejuice, that is, just saying everything in psychotic triplicate, like a broken record.

15. Granting interviews to all comers, but responding to all interview questions with a feisty, a capella version of Right Said Fred’s “A Love For All Seasons.”

17. Dropping trou during a televised press conference to shit in an empty pizza box before eyes of bored, jaded nation.