Can't these guys keep a lid on it? 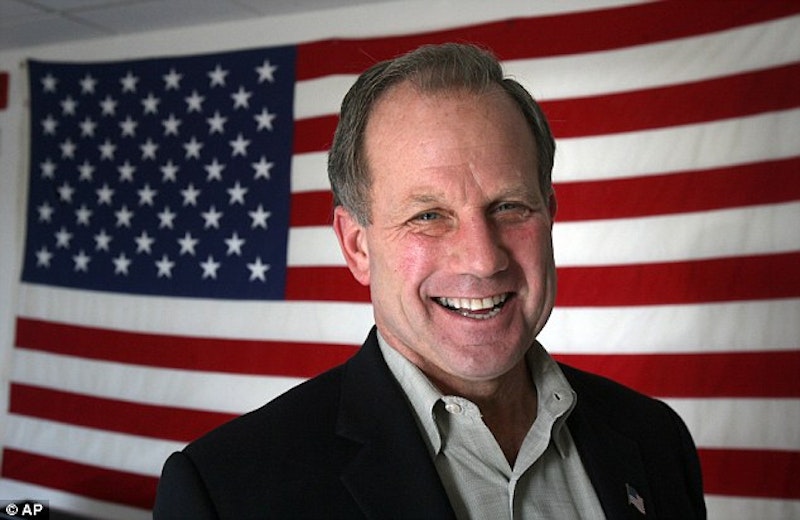 My Halloween was nearly ruined when the call came in from a local talk show. John Koster, Republican candidate for the House of Representatives from Washington state's first district, had been recorded holding forth on abortion. Seattle-based weekly The Stranger was trying to make hay out of it. Koster had addressed what he called "the rape thing." "Rape... it's just a thing," mocked The Stranger, but I'm guessing most readers know exactly what he means. The constant press coverage of Republicans saying ridiculously stupid things about their pro-life politics and rape has been infuriating for a lot of people, especially those who have young children. One Facebook friend, a mother of two boys, wrote Saturday: "Thank you, media, for forcing us to explain to our 11 year old son what rape is because that is all you have plastered on local TV for the past week or so."

At first, blush, I assumed that Koster, a Club for Growth economic conservative favorite, was dismissing the whole controversy. Remember that it started when Missouri Senate candidate Todd Akin mused about "legitimate rape" and a woman's body's miraculous ability to tell consensual sperm from the other kind. It continued with Indiana Senate candidate Richard Mourdock saying that abortion should not be allowed in the case of rape because "it is something that God intended to happen." Akin found himself cut off from most major GOP fundraising apparatus overnight. If he wins, it will be because he quickly cut an ad apologizing to the people of Missouri for saying such egregiously idiotic things and because his opponent, Sen. Claire McCaskill, is unpopular. Mourdock said that the indefinite pronoun "it" referred to "life," not "rape," but was otherwise unrepentant. This probably cooked his goose. His opponent, Rep. Joe Donnelly, is a nominally pro-life Democrat. Given that sort of choice, it should be no wonder that polls have voters favoring Donnelly by over 10 points.

Given the backlash, I assumed Koster had refused to dive in, but no. Koster explained he is pro-life, full stop. If a woman's life is seriously in danger, he said, then any procedures necessary to save her life up to and including abortion are okay. If not, then no. Though that explanation lends to Koster's thoughts a coherence that he was frankly struggling for. "On the rape thing," he explained, "it's like, how does putting more violence onto a woman's body and taking the life of an innocent child that's the consequence of this crime, how does that make it better? You know what I mean?" He also told a story: "I know a woman who was raped and kept her child, gave it up for adoption. She doesn't regret it. In fact, she's a big pro-life proponent."

When these comments came to light, Koster realized that there was no upside to going on the air and publicly defending them in his close race against Democrat Suzan DelBene, so I got the call instead. Would I address the issue, and would I be willing to do some back-and-forth with a liberal opponent? I agreed to go on but said, "Oh, let's not" on the Crossfire idea because, as I told host Dillon Honcoop and repeated on-air, I am not a conservative on the subject of rape. The quip was a bit unfair to conservatives, but only a bit. According to polls, America is increasingly a pro-life country. This is rarely reflected in law because of judicial arrogance, pro-life cluelessness, and a press that seems incapable of proportion or fairness on this issue.

This is a country with Supreme Court-mandated abortion on demand. It's hard to craft a piece of legislation that will pass Constitutional muster to ban the truly barbaric procedure called partial-birth abortion, let alone seriously legally curtail access to abortion. There remains the real possibility that Obamacare, as interpreted by the Obama administration, will expand abortion coverage by insurance companies in the next few years. And in this context, we're arguing about whether or not we should ideally prohibit abortion in almost all cases or perhaps bracket off exceptions for rape and incest? My friend Robert VerBruggen, an editor for the conservative National Review, reflected the good sense and humor of the majority of the American people when he wrote recently, "Dear GOP candidates: If you think it should be illegal for a woman to abort her rapist's baby, why don't you keep it to yourself for a bit?"