At This Point in Election, Obama and Romney Almost Irrelevant

Everything depends on what campaign gets more voters to the polls. 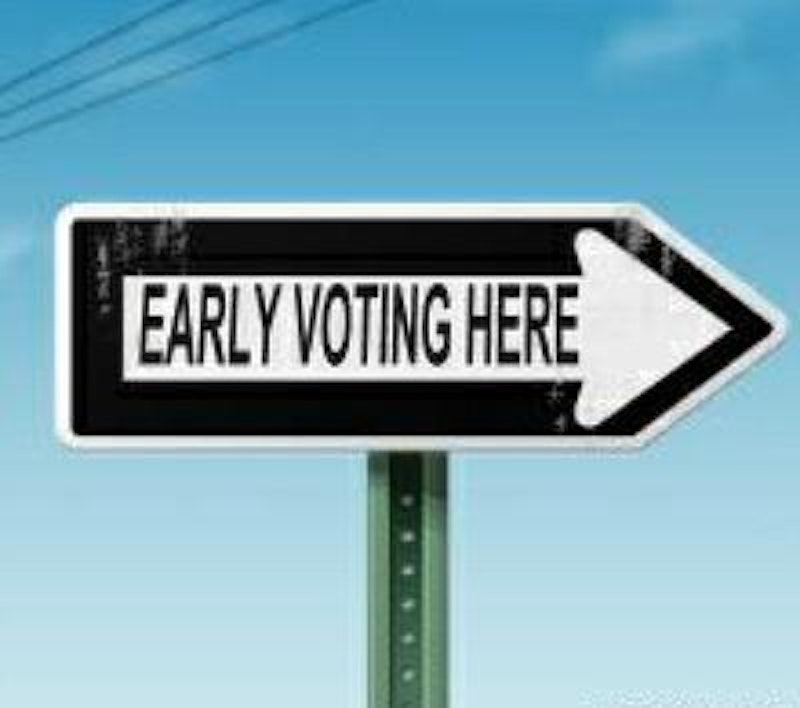 There arrives a point in every election where nothing can be done to alter its outcome and all anyone can do is to sit back and watch it happen. Cross-currents sweep the candidates along on a surging tide, with or without their consent, and they become almost irrelevant to the forces driving their campaigns. Mistakes matter most, and silence seems preferable to a miscue. Campaign 2012 has reached that irreversible point.

The electoral map has shrunk to a handful of states and a tiny sliver of voters, rendering a majority of the electorate almost negligible to the process. The electoral map is a huge red sprawl with blue borders: Geography belongs to Republicans and population is the property of Democrats.

There are an infinite variety of combinations, scenarios and guessing games that could propel either President Obama to reelection or Republican Mitt Romney into the White House. Whatever the mix, three states remain critical to the outcome—Ohio, Florida and Virginia. Only one Democrat in the past 75 years, Jimmy Carter, has been denied a second term as president.

The electoral map, although slightly more navigable for Obama, is considered so tightly contoured that the possibility of one candidate winning the popular vote and the other securing the electoral college is now an accepted meme in the nation’s political conversation. Four presidents have lost the popular vote but won the electoral vote: Benjamin Henry Harrison, Rutherford Hayes, John Quincy Adams and George W. Bush. In 2000, Democrat Al Gore carried the popular election by 500,000 votes but lost to Bush by a single state, Florida, courtesy of the U.S. Supreme Court. And in 2004, Bush defeated Democrat John Kerry by a single state, the critically important Ohio. No Republican has ever won the presidency without carrying Ohio.

There is also speculation that the election could deadlock at 269-269 electoral votes—each candidate one vote shy of the required 270—and wind up in the House of Representatives. The House has decided the presidency only twice, Thomas Jefferson in 1801 (because there was no vice president) and John Quincy Adams in 1825. If the House is forced to choose, each state has a single vote and each state must caucus to decide how it will cast its vote. Under the current arrangement, the numbers appear to favor Romney because Republicans control more states and a majority of the 435 seats. But that, too, could change on election day.

Voting is triage. Candidates know what votes they have, what votes they don’t have and those that are persuadable. That last group is the object of candidates’ affection at this closing stage of the campaign. Identifying the vote and getting it out supersedes all other political activity. The Obama campaign in 2008 demonstrated its skill and efficiency at organizing its ground game and delivering the vote on election day. This year, following that same strategy, the number of field offices established in must-win states by the Obama campaign far outnumbers those of the Romney campaign. The one thing political polls cannot measure is organization.

But another unknown ingredient has been introduced this year that was not a factor four years ago. Early voting has been underway in 35 states which, in a sense, for the first time, makes every day an election day. Early voting tends to work in the Democrats’ favor by turnout. About 40 percent of the voters will have cast their ballots early in one form or another. And one key question is how missteps and botched debates have influenced early voting as the events occurred almost simultaneously. Even the weather is a factor this year. Hurricane Sandy’s damage could flood out early voting in coastal states and power outages could disrupt polling places and get-out-the vote operations.

Another untested novelty in this year’s election is the ubiquity of the social media such as Twitter and Facebook and its untold potential to link millions upon millions of friends and users. The social media, for all of its frivolity and trivial uses, has the ability to harness the connected electorate into a universal workforce that a decade ago was unthinkable.

The line of demarcation in this year’s election is the first debate between Obama and Romney that occurred on Oct. 3. By every measure, Obama performed badly and lost the face-off to Romney. Thus began Romney’s reversal of fortunes and his ascent in the polls even though Obama bounced back and took command and the trophies in the remaining two debates. The polls have been nearly dead even ever since, give or take a point or two either way.

If Obama loses, he has no one to blame but himself. Before the first, disastrous debate, Obama had a commanding lead in nearly every major poll and Romney was running a haphazard campaign of shifting positions and an uncertain base. It’s true that a lead of that size was bound to tighten as Election Day drew close, but not as rapidly and as convincingly as it has. And now Romney, the former “severely conservative” candidate, has swerved from the right to the center as the agent of peace, change and moderation. Voters appear to be accepting the new model.

Polls show that the greatest drop-off of support for Obama since 2008 has been among whites, especially white males, who rationalize that Romney has made a better case for repairing the economy than Obama in a racially polarized electorate. But white males, known otherwise as Reagan Democrats, have been drifting Republican since 1980. Even the so-called gender gap has narrowed despite the Republicans’ pro-life policies and women’s concern over reproductive rights which favor Democrats.

The reproductive rights issue is front and center once again, revived when Indiana Senate candidate Richard Mourdock (R) said that pregnancy through rape is God’s will and a gift, a position shared by Romney’s running-mate, Rep. Paul Ryan. Romney, though, has refused to withdraw his endorsement of Mourdock and Democrats have pounced on the issue in speeches and ads. Every day that social issues dominate the campaign is a lost day for Romney who wants to focus on the economy.

In case anyone hasn’t noticed, there is a new voter coalition that is shifting away from the old white majority to the burgeoning population of polyglot minorities. Obama enjoys almost universal support among blacks and Latinos. In 2008, Obama won 94 percent of the black vote and 70 percent of the Hispanic vote. Today, there are 80 million more Hispanics than there were in 2008. Obama has relaxed deportation rules and has pledged immigration reform in a second term.

There is disagreement over whether national polls or state polls taken individually are a true reflection of the status of the presidential race. Most national polls show the race in a dead heat or close to it. But individual polls conducted in battleground states show Obama with respectable leads.

There has been widespread concern this year over Republican attempts at voter suppression through the methodical passage of strict photo ID laws which would disproportionately affect blacks, young people, the elderly and the poor—those least likely to have drivers’ licenses or passports. In many cases, states were unable to provide the required photo ID cards in time for the general election, creating the potential of disenfranchising millions of voters.

Democrats won either reversals or temporary suspensions in six states, notably in Pennsylvania, Ohio, Texas and California. Oddly, there is no constitutional guarantee of the right to vote. The founding fathers, for whatever political or deal-making reason, left that matter up to the states and that’s why it’s such a crazy-quilt mess.

There are three other major considerations at stake in the presidential election: The first is the Supreme Court. The next president will get to appoint at least two justices. Republicans are itching to repeal Roe vs. Wade (abortion rights) and Democrats want a crack at reversing Citizens United (corporations are people with smokestacks). Second is the possible resurgence of the neo-cons and the restoration of the George W. Bush presidency and its gun-point diplomacy. Seventeen of Romney’s top foreign policy advisors are leftovers from the Bush Administration and the war in Iraq. And finally, the future of Obamacare which, if repealed, would leave 45 million people uninsured and all of those young people who joined their parents’ health care plans left to fend for themselves.

As election 2012 closes in on Nov. 6, there is only one iron law of politics for those who look to heaven for Divine assistance: God is on the side with the best get-out-the-vote operation.