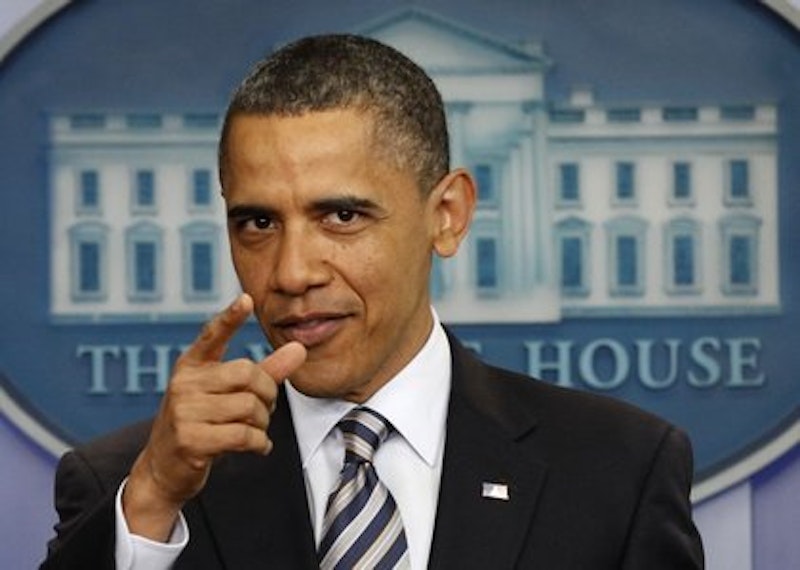 Jonathan Chait recently posted his final pitch for Barack Obama. In the endorsement, Chait claims that Obama is not merely an acceptable liberal candidate, but a "great president."

As evidence, Chait points to some of Obama's technocratic achievements, such as public school reform and financial regulation. He also lauds several big bore successes, like health care reform, the auto bailout, the intervention in Libya, and the assassination of Osama Bin Laden. Of these, Chait says:

It is noteworthy that four of the best decisions that Obama made during his presidency ran against the advice of much of his own administration. Numerous Democrats in Congress and the White House urged him to throw in the towel on health-care reform, but he was one of very few voices in his administration determined to see it through. Many of his own advisers, both economists steeped in free-market models and advisers anxious about a bailout-weary public, argued against his decision to extend credit to, and restructure, the auto industry. On Libya, Obama’s staff presented him with options either to posture ineffectually or do nothing; he alone forced them to draw up an option that would prevent a massacre. And Obama overruled some cautious advisers and decided to kill Osama bin Laden.

The latter three decisions are all highly popular now, but all of them carried the risk of inflicting a mortal political wound, like Bill Clinton’s health-care failure and Jimmy Carter’s attempted raid into Iran. (George W. Bush, presented with a similar option, did not strike bin Laden.) In making these calls, Obama displayed judgment and nerve.

I don't agree with all of that—having lived through Chicago style school reform, I feel pretty confident in saying that the main effect of such reform on the national level will be to cripple unions and make kids take more stupid tests, neither of which will benefit anyone except charter schools and the politicians to whom they give their campaign donations. But overall, I agree with Chait; health care reform is a very good thing; the auto bailout was good, I'd rather have some financial regulation than none… and so forth.

The fact that Obama has made some progressive policy moves leads Chait to conclude that there is no good reason for liberals who voted for him last time to oppose him this time. He chalks up most left/center opposition to Obama to what might be called cognitive errors. Some people confusedly blame Obama for the economy, when the recession is not really his fault. And, related, some believed Obama's burbling about hope and change when that hope and change was, clearly, just the usual campaign hyperbole. Obama can't be expected to fix the economy all at once, and he can't be expected to sprinkle hope and change fairy dust. By any reasonable measure, Chait concludes, lefties and centrists and everyone but plutocrats and Tea Party nutjobs should vote for Obama.

Again, I don't necessarily disagree with all of that. Bush (and, planting the seeds, Clinton administration officials like Robert Rubin and Larry Summers) wrecked the economy, not Obama—and Republicans in Congress have stalled stimulus projects that might have helped. And I didn't exactly believe in hope and change… and I certainly didn't believe Obama could magically make bipartisan happiness rain down (though I think that Obama quite possibly believed that himself.)

Still, I think Chait is engaged in bit of selective amnesia. Specifically, Obama didn't crush John McCain because the country suddenly signed on to technocratic progressive policy goals. Obama crushed McCain because George Bush was really, really unpopular. Specifically, his multiple wars and disastrous kowtowing to the wealthy, with the consequent financial collapse, did not sit well with the electorate. Obama ran against that by (a) presenting himself as anti-war (which is why he won the Democratic nomination, remember?), and (b) as willing to fight for the average Joe against the powerful.

And four years later, where are we? There were some financial reforms, but men like Ben Bernanke and Tim Geithner are still ensconced where they've always been ensconced. We got out of Iraq, thank God, but we're still slogging along in Afghanistan. We're still fighting a stupid war against marijuana that Obama said we'd quit.

Or to put it in terms of a single policy, Chait goes through his entire endorsement of Obama without once mentioning the word "drone." Hell, he doesn't even mention the word "Afghanistan." We are in the middle of an endless, stupid, useless war, that the President is losing, and yet which he refuses to admit is unwinnable. Surely, progressives, or, you know, Americans, might want to consider this in any assessment of the president's "greatness." Is Chait so blinded by the awesomeness of kids taking more tests here that he can't see the children being blown to bits over there?

The answer appears to be "yes." He is blinded. If it were George Bush dropping bombs on first responders, Chait would be on the ramparts declaring his presidency a failure and an abomination. And this is precisely why, for all his accomplishments, Obama's presidency makes me fear for our future. Obama rode into office on an essentially anti-imperialist platform. His subsequent whole-hearted embrace of imperialism has made it essentially impossible to articulate an anti-imperialist argument in mainstream political discourse. Romney and Obama agree on foreign policy, as they demonstrated in their final debate—and the foreign policy they agree on is a moral and, I believe, a strategic disaster.

Jonathan Chait should know that. But he's a partisan, and Obama's presidency has placed him in a position where he can have his partisanship or his morals, but not both. He and others like him have chosen partisanship. Our country, and our future, is bleaker for it.