Romney Supporters Give Me the Willards 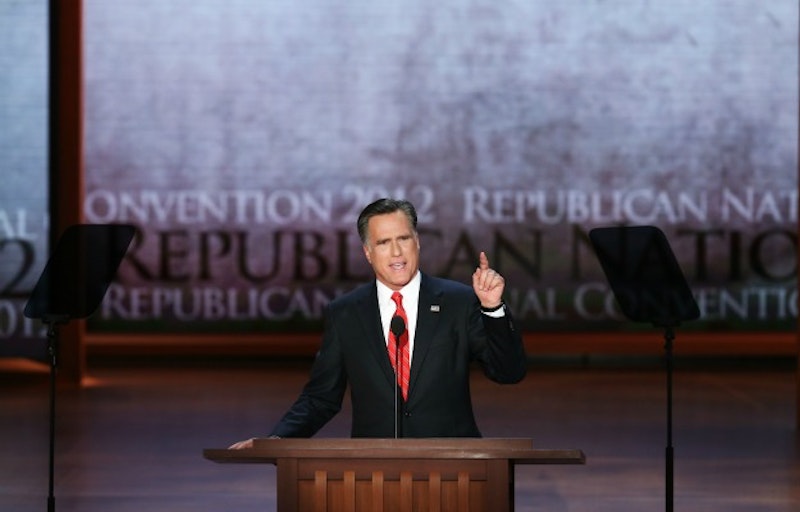 The devastation Hurricane Sandy brought to New York City has cast a long shadow over the east coast and the entire nation, with more noise than usual from media organizations and journalists who have lost power and probably didn't think twice about how badly the Caribbean got messed up. But New Yorkers aren't teary-eyed about damp slippers: the flooding of the subway and Lower Manhattan are unprecedented and much bigger than a weekend headache for the MTA, commuters, and the poor workers who have to get down in the muck to fix an already ancient, crumbling infrastructure.

There's no better time to talk about man-made climate change and how it's bringing us storms like Sandy, Irene, double, triple, quadruple blizzards, the hottest months on record, and the coldest. Better late than never, before we end up as Jake Gyllenhaal running from floodwaters and rabid snow dogs on a sheet of ice covering the New New York. A consensus of scientists and climate experts should be enough to at least prompt a discussion of this issue, but those on the right are only likely to dismiss those concerned experts as queers and effeminate bozos.

Over the past 18 months, the GOP has put on a dizzying display of barely masked xenophobia, homophobia, racism, sexism, and most disturbingly of all, anti-intellectualism and proud ignorance. It's hard to tell if Karl Rove and John Boehner sincerely believe climate change is a liberal red herring and women should be shamed and mocked for expressing themselves sexually, but they know there are votes to be plundered in the America using just those ideas. Carefully examine this video of a crowd at a Romney/Ryan rally responding to a climate change protestor with a vigorous "U-S-A!" chant. This might be the scariest omen of this election cycle, even more disturbing than 47%, legitimate rape, "shutting that whole thing down," Obama is a Kenyan socialist crypto-communist with ties to Al Qaeda and Satan dog whistles, Romney's inner void, and the resistance against a national healthcare system.

Never mind Romney's signature empty smirk; it's par for the course and essentially meaningless. He'd smile the same grim smirk when handed an apple pie by an Iowan grandmother or if one of his supporters called Obama a Black Panther. Imagine the thought process of those people, shooting down someone who wants to talk about climate change with a baboon-like patriotic slogan signifying nothing except "We're the best so fuck you." GOP politics have led us down the path of virulent nationalism, where people will ignore and shut out any problems their country might have out of the ridiculously childish idea that we're above being imperfect. It's an outgrowth of the absurd notion that Obama and the left "hate America," that they want to "destroy America." It's almost too stupid to even fathom, but the prospect of this mindset being supported and fed by the White House, even if Romney isn't truly one of them, is scary enough to keep you up at night.