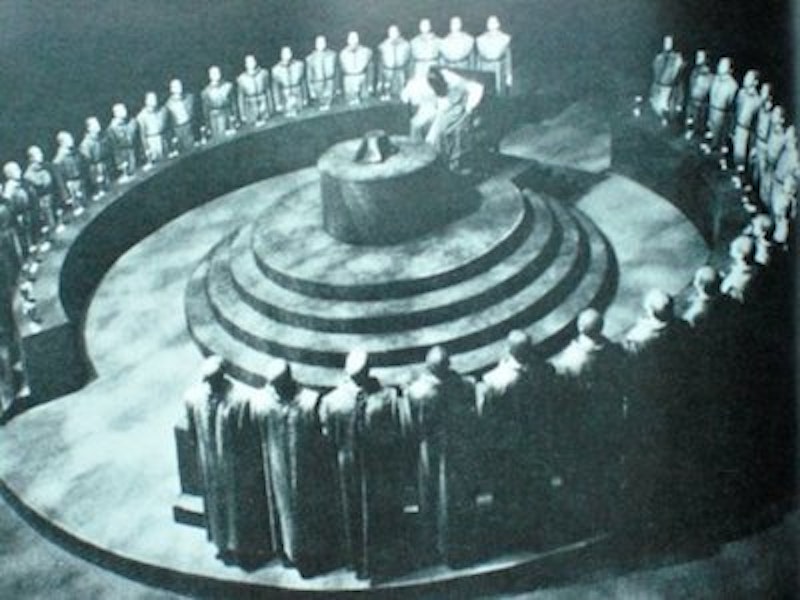 This Friday will be the 100th anniversary of the Thule Society, the mystical study group that later evolved into the Nazi Party (or at least Thursday is the centenary of a small precursor group’s renaming and re-launch to become the Thule Society).

I wish I could say that it’s all just history now, but fascism, at least in watered-down form, seems to be alive and well—and not just in the obvious, highly visible form of far-right groups who like to wear armbands or deride minorities. Across the political spectrum, there’s a newfound love of crushing the enemy and silencing dissent, sometimes using purported opposition to fascism as a moral justification.

Consider some of the heavy-handed tactics deployed by various factions just in the past few weeks.

The entire Durham, NC city council signed a letter condemning Canadian, semi-libertarian psychologist Jordan Peterson in advance of his talk at Durham’s biggest performing arts center, saying he’s not welcome in that town. Back in Canada, staffers of Ontario premier Doug Ford used sustained loud applause to drown out questions from skeptical reporters. In the UK, YouTuber Count Dankula lost his final appeal after being fined for teaching a dog to do a Nazi salute as a joke.

Actress Ruby Rose exited Twitter after an angry online mob insisted she’s not lesbian enough (since she’s technically “gender fluid”) to play lesbian superhero Batwoman on TV, in keeping with the new leftist thinking that actors must be members of the (highly specific) minority groups they portray. (With similar demographic-separatist reasoning, Warner Bros. is now seeking a female director for a Supergirl movie.)

And crucially, the entire tech sector, or at least several major online platforms, seems to have decided—with some prodding from members of Congress and major media such as CNN—to delete videos on those platforms by conspiracy theorist Alex Jones, in one fell swoop proving him right on the basics: there is an establishment that can act in unison to squelch debate when it chooses to—and not long before midterm elections, as it happens. First they came for the paranoid, so to speak. (And as if our own Congress weren’t bad enough, some think China urged Disqus to take down Jones, which would make all this a bit like the plot about the China-appeasing Western media empire in the prescient Bond movie Tomorrow Never Dies.)

Jones was clamped down upon so hard that even videos mentioning him found themselves getting warnings from YouTube, which creates additional dire implications for the state of debate. A YouTube channel called H3H3 got shut down in mid-livestream by YouTube for mentioning Alex Jones, even though the hosts were condemning Jones as a conspiracy-theorist nut and defending YouTube. Now the hosts have become a bit more pro-Jones and are taking a fresh look at conspiracy theories.

One can’t help wondering if the treatment given Jones was a sort of beta test for clampdowns on more mainstream figures in the near future—such as Elizabeth Heng, the Republican California candidate for House of Representatives whose Facebook page was yanked at a pivotal point in her campaign against an establishment Democrat, ostensibly because her video about being influenced by the Cambodian genocide was too upsetting.

It’s not as if she was in favor of the genocide. But then, neither was NPR likely in favor of white supremacism when it was assailed by critics over the past several days for letting one white supremacist explain on-air how he’d rank major ethnic groups by intelligence.

Both left and right can find themselves denounced for overly-free speech these days, and I think it’d be a mistake to draw no conclusions beyond “left censorious, right free.”

I say that not just because the right has lately been showing its authoritarian side in other areas (as with Stephen Miller’s behind-the-scenes efforts to clamp down on refugees and immigrants, an effort Vanity Fair says makes him seem like Tolkien villain Griman Wormtongue and his own uncle condemns as hypocritical and absurd).

The simple right-left paradigm is unhelpful in part because the left has historically been the faction that wisely warned us that media mega-corporations, tech titans, “deep state” agencies, and an unofficial but influential “establishment” can throw their weight around to the detriment of robust discourse. Noam Chomsky, to his credit, is sticking to this argument and condemns the crackdown on Jones. Now the right has to agree with Chomsky et al, though it may rankle them.

The right should thank the left for its foresight, and the left (and even more so mushy mainstream liberals) should avoid gloating as the mega-corps target conservatives. It’ll be everyone sooner or later. (Even as I type this, there must be leftists wracked with anxiety wondering if, say, they can criticize the late V.S. Naipaul’s racism without thereby being punished as judgmental imperialists themselves.)

I’m strongly opposed to having government solve these problems (and by “solve,” since it’s government, I mean exacerbate). However, I wouldn’t mind seeing an enterprising lawyer try suing social media platforms for the practice of shadowbanning, in which users of social media platforms are rendered invisible or partially invisible to other users without knowing it, sometimes in fiendishly stealthy ways that make it appear to the user himself that his posts are up as usual. That’s deliberate deception reducing the efficacy of one’s time-consuming, sometimes business-related media efforts, like claiming to deliver packages and tossing them into a deep hole instead. How can that not be lawsuit-bait? Sign me up for the class action.

Jones associate Owen Shroyer of Infowars has a video up on that site showing that comments supportive of Jones and Infowars appear to have been deleted by YouTube from the most popular UFO-themed YouTube channel, SecureTeam10—which Shroyer notes is a favorite of several Infowars staffers. The shadow-deleting in this case is likely punishment by YouTube for SecureTeam10 doing a video denouncing the Jones bans, a video that has since been taken down. Even if one thinks Jones is horrible, surely talking about him in an inoffensive, analytical fashion can’t now be off-limits or we’re in real trouble.

Between that and the laptop of the recently-deceased UFO conspiracy theorist Max Spiers getting mysteriously wiped clean by authorities, the establishment will have no one but itself to blame if conspiracy theorists and UFO buffs become the core of a new resistance to mainstream dogmatism. Never in a million years did I think I’d have to plant my libertarian flag on the shaky ground of conspiracy talk and Area 51, but if the powers that be are backing us all into a corner together, we may have to learn how to resist together. And despite the extraordinary influence of the tech giants, to quote X-Files, “Resistance is possible.” I think. For at least a little bit longer.

Presumably, it’s merely coincidence that as all these political battles were occurring in the days leading up to the Thule Society’s centenary, the U.S. Air Force appears, for reasons unknown, to have covered up a two-kiloton blast caused by a meteor bursting into pieces right over its Thule Air Force Base in Greenland. Then again, one of many arguably right-leaning Twitter accounts recently taken down (along with Gavin McInnes’ and Anarchyball’s) was that of Sweet Meteor O’Death, who jokes about the end being nigh, so maybe the aerial blast was the Meteor’s way of showing it cannot be silenced.

When you try to repress things, they often come back in more dangerous forms.

And in the interests of fostering healthy debate, come see me argue against belief in God, opposed by Christian apologist Keith Darrell, on Friday, Aug. 24 (8-10 p.m.) at the 202 W. 49th St. Playwright Tavern (not the one farther south) in New York City, for free (and my thanks to organizer Gerard Perry, who appears to have been banned from Twitter recently).