Conservative Party may force him to undergo diversity training. 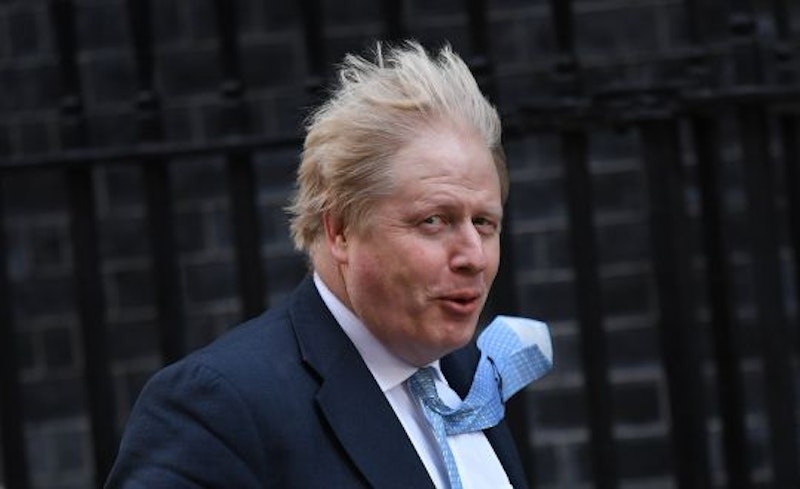 In Denmark, it’s now illegal to wear any garment that hides the face in public place, which means there’s a burqa ban in effect. The new Danish law also applies to the lesser-known niqab, a headpiece that partially covers the face. The UK’s Conservative MP Boris Johnson, commenting on the issue in a Daily Telegraph column, said he doesn’t support such a law. Then he decided to stir the pot by calling burqas “ridiculous” and writing that they make women look like “letter boxes” and “bank robbers.”

While there’s no garment worn in public more ridiculous (and oppressive) than the male-invented burqa, Johnson came under heavy fire for the provocation because it was directed at Islam, the world’s most protected religion. The former foreign secretary added, “It is weird and bullying to expect women to cover their faces,” which is undeniable, although progressives predictably never address this issue. It’s odd that only conservatives end up speaking out against the men who force women to dress so uncomfortably because they’re afraid of other men’s reactions to a glimpse of hair or skin. The UK’s Equality and Human Rights Commission compared Johnson’s remarks to “vilifying Muslim women,” which is ironic given that burqa-clad women are being deprived of both equality with men and a human right.

British Prime Minister Theresa May and other Conservative Party leaders called on Johnson to apologize, which he’s declined to do, but the real chilling development was Metropolitan Police Commissioner Cressida Dick weighing in to declare the she’d had police officers investigate the matter. They found that his words were “legal”—there was no hate crime—but what’s become of the birthplace of the Magna Carta when the cops are policing jokes about how people dress?

There’s no mention of the burqa in the Quran, but women leaving their homes without donning one risk a public beating by men in fundamentalist Muslim nations. The same people calling for Johnson’s head consider themselves feminists, but the burqa’s a blind spot for them. If men criticize a woman for the way she dresses, feminists are all over them for shaming. When a school badminton team makes girls wear a skirt while boys can wear shorts, people speak out, but when a woman’s given just a little slot to see out of, and the view’s shrouded by a piece of mesh, it’s ignored.

Limitations on wearing face veils in public are also in place in France, Belgium, the Netherlands, Bulgaria, and Austria. Whether these laws are advisable or just debatable—women may be stuck at home all day if they’re afraid to go outside and break the law—what’s not in question is people’s hard-fought freedom to mock religion in any way they wish to. That the Muslim world still clings to blasphemy laws becomes a problem when it leads to Western nations involving law enforcement when a religion’s made fun of, in order to spare people’s feelings. This represents a regression.

Religion and government are the two biggest threats to personal liberty, and mockery has long been an effective tool in democracies for keeping them in their place.

Religion must be joked about because it seeks to control people while claiming to have the universe all figured out. All jokes about religion are going to be offensive to some, so if you’re going after people because they’ve offended others then you’re going after all jokes about religion. The problem is that a top politician who may be the next Prime Minister’s the one doing the joking, and in a way that Steve Bannon would approve of. It could be seen as bullying when a national leader singles a small group out for ridicule. It’s better to leave such humor to comedians and other social commentators.

Johnson’s trying out a Trump-like move—a nod to the British nationalists who are concerned with preserving “European identity,” which is sometimes code for “skin color.” Trump did a similar thing in 2015 to Mexicans (“they’re rapists”) after descending the escalator in Trump Tower to announce his run for the presidency, although in much harsher terms. In a free society, leaders should always point out oppression whenever it manifests itself, but there are various ways to do it. Johnson could’ve confined his comments to the plight of the women made to wear burqas without resorting to mockery and comparing them to criminals, but clearly he had more than just addressing forced dress codes on women on his mind.

Johnson may have made a political mistake, but that’s what they said until Trump won in 2016, so that one’s not settled yet. The real story here is the UK’s ongoing descent into a nation where cops police public discourse. There should’ve been a sense of panic when Cressida Dick said she wouldn’t attempt to prosecute Boris Johnson, because she shouldn’t even have a say in the matter, but it appears that the UK’s too far down the road of trustfully putting everything in the hands of the government to hear the warning bells at this point.

The problem with British hate speech laws is that in today’s victimhood-centric society, people are accused of hate speech for hurting others’ feelings. That puts the most easily offended in control of how people can talk. The British people have a long comic tradition that mockery’s essential to. If they keep traveling on the path they’re on, that part of their history could fade away. That would be a real loss of identity.