In The New York Times, “Whitey” Reveals His Crippling Privilege

An op-ed about a white person so guilty about his privilege he doesn’t feel he should keep living. 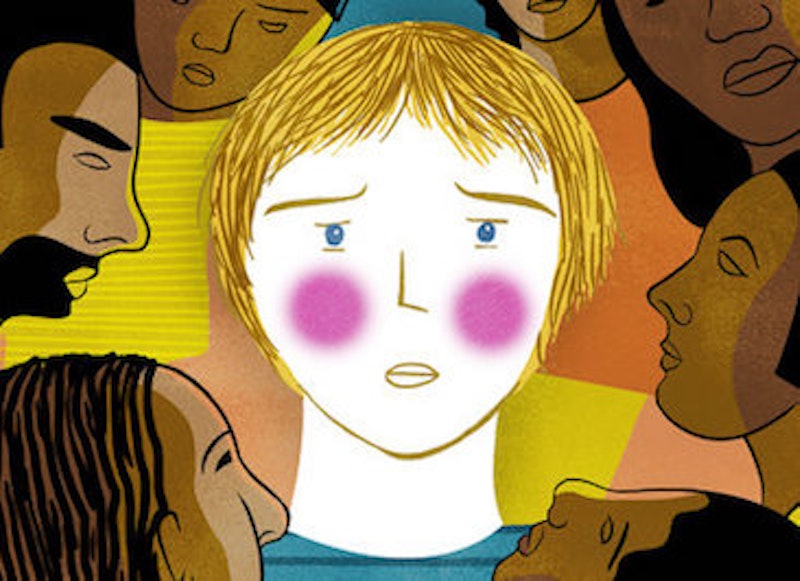 What do you do when you’re wracked with guilt because of things beyond your control, not a bad act you actually committed, and don’t know how to get your feelings out? One option is to write to Cheryl Strayed and Steve Almond, co-hosts of the podcast known as Dear Sugars. As Almond put it, it’s a show for people who "don't want an answer, they want permission essentially to feel what they're feeling and to know that they're in a process of struggle and they're not alone in that."

One such person, who signed his plaintive missive “Whitey,” is struggling with the self-loathing that comes with having a “white/upper middle class/cisgender identity”—it’s a modern affliction—while trying to fit in with the progressive politics of the regressive Left on his college campus. Whitey’s letter appeared in the form of an August 14 New York Times op-ed co-written by Strayed and Almond. They offer him advice on dealing with his race-induced self-loathing and the feeling that “there is no ‘me’” outside of his own identities. Whitey sounds like he can barely get out of bed in the morning. He’s at least self-aware enough to know that, “This isn’t helpful to me or to anyone, especially people of color.”

Whitey diligently follows all the rules of intersectionality in responding to his position atop the social pecking order. He tries to be a good “ally,” studies “proper etiquette,” reads writers of color, and votes “in a way that will not harm P.O.C. (and other vulnerable people).” Whitey also initiates conversations with his fellow privileged about their privilege, donates to BLM, and takes special courses to get even more woke, but nothing seems to help. He’s still afraid that he’s saying things—microaggressions—that offend people of color without even realizing it because ”privilege is invisible to itself.”

It really doesn’t appear so invisible to Whitey, who’s obsessed with his privilege, but Strayed and Almond don’t point this out. His hypersensitivity is valid to them—they’re in the business of giving people permission to feel as they do—but what he’s written could easily be read as a parody of the neuroses that modern progressivism induces if you buy into the intersectionality program. They point out that Whitey’s anxiety’s acute because he’s just gone from living in an East Harlem neighborhood where whites were in a minority to a mostly white, elite private college campus that’s “reflecting his privilege back to him.”

Almond advises Whitey not to wallow in self-hatred, and reassures him that privilege itself isn’t bad—it’s what you do with it that counts. But Whitey’s already doing a lot, which Almond and Strayed are aware of, and it’s not working. How could he possibly do more? He’s reading, doing coursework, discussing, reflecting, donating, and trying to properly align with marginalized minorities, but it’s still not enough. The podcast hosts, who are both writers, don’t tell him he’d be better off thinking of himself as an individual rather than hangdogging it because he’s an avatar of oppression. Being from East Harlem and having been brought up in the same apartment four generations of his family have lived in, Whitey’s probably not so privileged. Still Strayed, who knows scant details of Whitey’s upbringing, tells him he has privileges denied to others, and that no matter how difficult their lives have been or how much money their families had, all whites are privileged. That’s propaganda.

This is the sort of cant that has reduced the Whiteys of the world to blithering, self-conscious basket cases who are barely able to function. Instead of having been told about the evils of racism and given concrete measures they can use to fight it, they’ve been so inundated with all the talk of all the privilege that they feel they shouldn’t even exist. As Whitey put it, “I feel like my literal existence hurts people, like I’m always taking up space that should belong to someone else."

What a pathetic statement from someone with his whole life in front of him who’s doing his best to please his progressive taskmasters’ expectations. Strayed and Almond offer this fellow little constructive advice. They tell him not to wallow in his guilt, but he already explicitly stated that he’s aware that this is a problem in his letter. Then the writers prattle on about privilege, when he obviously needs a new topic to focus on so he’s not “curled up in a ball of shame.”

If they really wanted to help him, Strayed and Almond could’ve said something like, “Hey, the concept of privilege obviously hasn’t worked for you—more like it’s rendered you dysfunctional. So forget that approach try another one. Just keep doing whatever you can think of to improve the lives of the underprivileged people you care about. Spend your time at a place where you can volunteer and help people. Doing something tangibly productive should make you a happier person.”

In a sense, Whitey represents the ultimate victory of intersectionality, which categorizes and ranks people by the demographic boxes they check, not by who they actually are. Whitey’s a person of ostensibly great privilege who’s been fully stripped of power and is now ready to be the perfect ally by happily sitting in the back of the room and listening to the “authentic” voices of those less fortunate than he is. He’s been lobotomized.