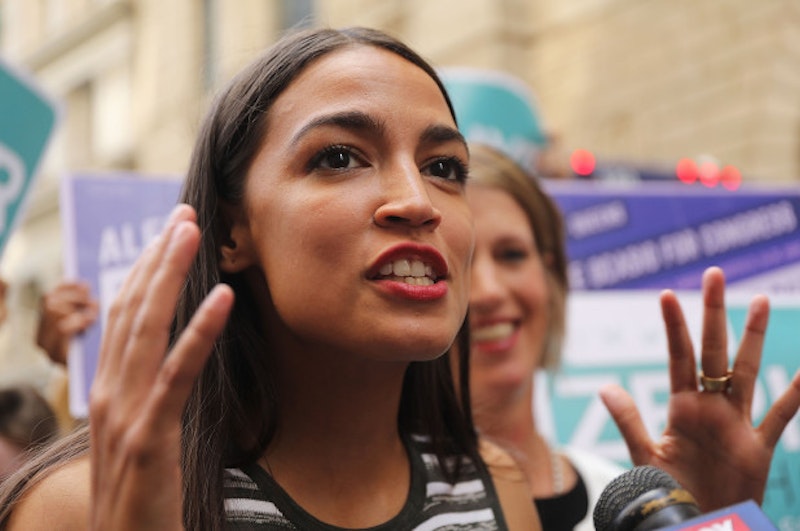 Barack Obama left Alexandria Ocasio-Cortez off his endorsement list of 81 Democratic candidates running in the midterm elections. That’s the first major bump in the road for the rising left-wing supernova since her stunning primary victory in June over heavy favorite Joe Crowley in New York’s 14th district. Maybe the former president isn’t quite ready to embrace the “S” word, even though being called a socialist by Republicans has lost much of its bite after years of overuse. Perhaps the 28-year-old former bartender’s numerous post-victory gaffes have spooked him too. She needs a little polishing.

Ocasio-Cortez used to call herself just a socialist, but has now softened it to “democratic socialist,” a distinction that, while it means nothing at Fox News or Breitbart where they’ll just keep talking about Venezuela when the topic of socialism arises, should broaden her appeal in the heartland. But the media’s paid scant attention to what Ocasio-Cortez actually is, preferring to chase the story about the political phenomenon she represents.

Everyone’s trying to figure out if Ocasio-Cortez is the future of the Democrats if the Trump years spark a hard turn to the left. The media ignored the young candidate until her unlikely victory, and now it’s scrambling to catch up. The New York Times ran just one piece about the hometown candidate as she challenged Crowley in the primary. Maybe that publication’s just as out of touch as when it guaranteed a Hillary Clinton win in 2016.

There’s much confusion about what socialism is, so it’s no shock that democratic socialism’s still an obscure topic. Many conservatives think that the Nordic democracies are socialist nations, when they’re actually capitalistic systems that tax heavily to redistribute wealth. Denmark, Sweden, and Norway are even more free-market and non-interventionist than the U.S., which is crucial to generating the cash they want to dole out. Social Democrats, on the other hand, don't care much for capitalism—the concept of profits going to capitalists makes them queasy—but democratic socialists aren’t calling for an end to capitalism tomorrow. They’d prefer to weaken it in increments and wait for the day when the workers control the economy.

Ocasio-Cortez recently tweeted, "There is no district too red for us to flip." While overstated, what’s she’s saying is that when people in all walks of life hear what she’s for they can be convinced. As Ocasio-Cortez has also tweeted, “I grew up scrubbing toilets with my mom. We don’t run from the ‘left.’ We run from the bottom.” That’s not a bad message to stick with, as flattening the electorate through a binary left-right lens limits her potential. If this indicates Ocasio-Cortez will focus on economic matters rather than the worn-out identity politics that brought on a Trump victory, then all the better for the future of the Democratic party.

The most important intellectual in the history of the American Democratic Socialist movement is the late Michael Harrington, founder of Democratic Socialists of America and author of The Other America. Lyndon Johnson put Harrington’s ideas on economic inequality into action with his War on Poverty. Ocasio-Cortez is a DSA member—it’s an advocacy group, not a political party—so a look at their platform’s a good indicator of her ideology. DSA believes all citizens are entitled to food, housing, health care, childcare, and education. It stands for democratizing private businesses by putting workers in control, and nationalizing hospitals and the entire financial sector. Some DSA members advocate the abolition of the police and prison systems.

Ocasio-Cortez supports Medicare-for-All. Radical? The Republicans might in the not-too-distant future propose such a plan, although under a different name. A Kaiser Health tracking poll in March found that 59 percent of Americans supported a Medicare-for-All type system. She’ll also push for a Universal Jobs Guarantee, free public schools and universities, immigration reform (she wants ICE abolished), strong action on climate change, affordable housing for all, justice system and campaign finance reform, and the demilitarization of police departments. Ocasio-Cortez opposes for-profit prisons and the futile War on Drugs.

Every cent of the trillion dollars spent on the Republican War on Drugs has been wasted, even though they harp on about the Democrats’ profligate spending. The GOP flushed around $2 trillion down the toilet with the unnecessary Iraq War, but like Ocasio-Cortez says, they only ask how we’re going to pay for various social welfare programs, but never how we’re going to pay for war. Just think about how much affordable housing and education could’ve been provided with $3 trillion and how much the better shape this country would be in right now if it had.

The current frenzy over Ocasio-Cortez is most likely an overreaction, as she won the primary in a heavily Latino district where only a fraction of the voters cast their ballots. If Trump loses in 2020, she’ll seem less attractive to Democrats than now because the public shifts away from the politics of whoever’s in the White House, but if he wins her star will continue to rise. In any case, Republicans calling her nuts because they say the U.S. doesn't have the means to pay for Medicare-for-All while they add a trillion dollars in a year to the national debt and have a president who thinks we’ll pay the national debt down with the revenues from trade tariffs will continue to look ridiculous.