We Needed Kim Davis in Jail 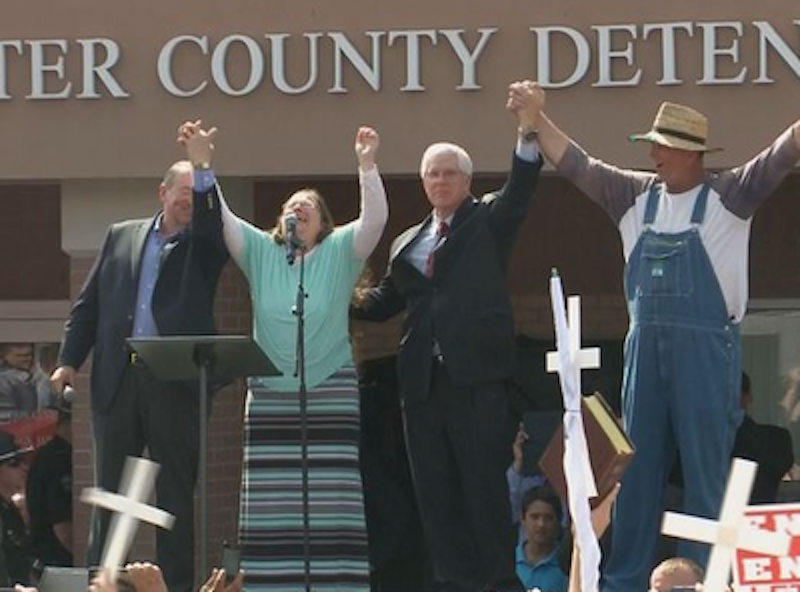 Kim Davis was released from jail yesterday afternoon, after serving six days, on the condition that she not interfere again with the issuance of marriage licenses to same-sex couples. Mike Huckabee was right there to greet her, and her address to her excited fans was accompanied by the Rocky III theme song "Eye of the Tiger." Davis' lawyers vowed that she will fight on, regardless of the terms of her release, setting the stage for plenty more drama to come.

"Kim Davis, the clerk in Rowan County, Ky., went to jail last week, and there was no good reason for her to be there," wrote Ryan T. Anderson of the conservative Heritage Foundation in the first sentence of his flawed op-ed, "We Don’t Need Kim Davis to Be in Jail", in Monday's New York Times. It's a bad start to his argument, and it just gets worse.

First, the "clerk" in Kentucky the writer refers to is actually the Rowan County Clerk, who was elected and swore an oath to uphold the law—not God's law—when she took office. As Davis professes to be a devout Christian, you might think such an oath would carry an added weight, given that it involves God. To my knowledge, Davis has not addressed this inconvenient discrepancy.

Anderson incorrectly claims that her job description has changed since she took office, but the oath she took requires her to uphold the law, and laws change, as she certainly knows. There’s a good reason why she was not asked to uphold the law, as it stood in 2014, when she was elected. The focus of the column is that Kim Davis was jailed because her conscience prohibits her from allowing marriage certificates with her name affixed to them. The implication is that she believes, as she stated in court, that she may be sentenced to an eternity in a horrible place she calls "hell" if her name appears on such documents, even if she "recuses" herself personally and has her subordinates handle the same-sex marriage certificates.

Generally, Christians will point to particular passages of scripture—while ignoring the ones they don't like—when defending a religious belief. Davis' Apostolic Christian church has no doubt identified such verses as they apply to homosexuality, but I'm pretty sure that the Bible doesn't imply in any way that your name affixed to a same-sex marriage certificate—as Kentucky law requires Davis' to be—is a sin, especially when you have gone to great lengths to demonstrate that you personally refuse to allow gays to get married. The God worshipped at Davis' Solid Rock Apostolic Church is all-knowing and all-powerful, and He's presumably very capable of making such distinctions.

Anderson descends even deeper into absurdity when he claims that that the Obergefell v. Hodges U.S. Supreme Court case stating that same-sex marriage is a right all Americans are entitled to is not "constitutionally justified," a sentiment you'll often hear repeated among the Mike Huckabee "guns, God and gays" set. I’d refer Anderson to Article III of the Constitution, which vests in the U.S. Supreme Court the power to interpret the Constitution. Yes, the 14th Amendment does not explicitly state that gays (nor atheists or communists either, for that matter) can legally marry, but SCOTUS has determined that they are entitled to its protections, just like any other American.

Davis has always had the choice of refusing to issue marriage certificates to gay couples, as long as she allowed one of her employees to handle them. This has been the workaround that’s been used in similar situations after Obergefell v. Hodges, offering a simple, reasonable compromise solution. But Davis wants no part of this approach, although by Anderson's tone you'd think that her conscience—and the judge—offered her no choice but to go to jail. The choice has always been Davis', and she’s never once been personally required to issue a same-sex marriage license.

The entire American legal system breaks down when government employees are allowed to pick and choose what laws they’ll obey. That's why putting Davis in jail was the best move federal judge David L. Bunning could’ve made. Leniency would’ve sent the signal that everything's fair game, leading to chaos. The hyper-religious would be coming out of the woodwork with outlandish claims as to why they could not perform their various duties as public servants.

Anderson wants the Kentucky law changed so that the county clerk's name is no longer required to be affixed to all marriage certificates issued in their respective counties. That's fine, but that’s not the current law, and Davis is not above the law, despite her impression that she answers to a higher authority.

The headline of his column reads that "we" don't need Kim Davis in jail. In fact, we did very much need her there to send her, and other government officials of like minds, a strong message. She’s denied American citizens their legal rights, and this could not stand. As for the "reason,” Davis chose to be in jail over some trumped up signature on a certificate issue. Her higher authority can sort that one out when her time comes. I'm sure her God can handle this one.