Donald Trump Is a Lot More Serious Than Jonah Goldberg 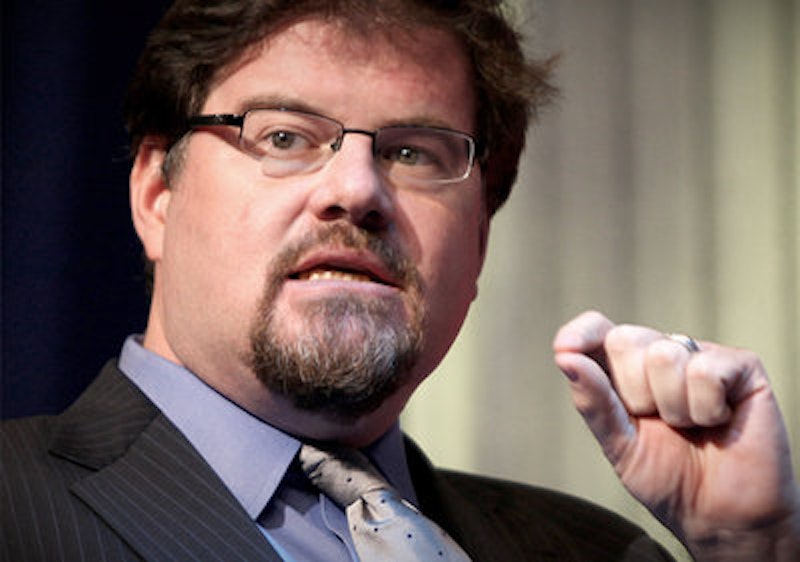 Jonah Goldberg is a smooth writer who wants to be serious. But he's silly and that's because the American right is silly. Goldberg doesn't like Donald Trump and has said so, and Trump has answered by being snotty about him on Twitter. But lots of other Republicans like Trump fine—more and more of them, it seems. Goldberg has written up his thoughts on this phenomenon, and they're worth a laugh.

Goldberg argues that Trump knows and cares little about policy, that he can't be trusted, and that he acts like a self-centered baby. I wouldn't disagree. Goldberg is taken aback that conservatives would support such a fraud. “Normally, when conservatives talk about how the public can be wrong, we mean that public,” Goldberg continues. “You know the one. The 'low-information voters' Rush Limbaugh is always talking about.” But now the right people, the ones who listen to Limbaugh, have gone astray. You see the problem for Goldberg's essay. He thinks that Rush Limbaugh has a good line on who's informed and who isn't.

In the same column, Goldberg writes, “He’s smart enough to be president.” Who is he writing about? Herman Cain. (“I love listening to him, and so do a lot of conservatives.”) Furthermore, Goldberg has a “lot of respect” for Ted Cruz, and he says that Newt Gingrich “brilliantly eviscerated the press in 2012” and did so with “a serious ideological worldview behind it.” Yet, by Goldberg's own account, Herman Cain thought he could fake his way through a presidential campaign. That's not a sign of someone smart enough to be president. I'll add that Ted Cruz is the man who thinks the GOP can shut down government and then quibble everybody into believing it was Obama. So far the plan has really worked. Finally, Newt's serious ideological evisceration of the press was the magnificent huff-and-puff he threw because he had just been asked about his ex-wife's claims about their marriage. Worldview didn't enter into things. Gingrich said the press' gutter mentality made life hard for decent office-seekers, and that anyway the reporters were doing it all to help Obama.

If you respect Cruz, and think Cain is smart enough to be president, and hold up Gingrich as somebody of serious intellect, then you're dealing in play money, and the face on the bills is Rush Limbaugh. Because if Goldberg can take that man seriously, he shouldn't strain at Trump. Limbaugh's a gifted fellow, in his way. Somebody who was born to snake in factoids and twiddle them about to generate snazzy rhetorical patterns. A good talker, let's say. But he tells nasty stories that don't match up with the facts. Not only did he slime poor Sandra Fluke, he demonstrated that he doesn't know how the pill works. (You take it every day, not every time you have sex.) If Goldberg thinks this man sets the standard of public policy knowledge, then I'd say Trump is a born leader who knows the corridors of power and has an instinctive understanding of American conservatism's Social Darwinist backbone. Why not? Apparently Limbaugh thinks that, or something like it. This is no time to start arguing with Limbaugh.

“If you want a really good sense of the damage Donald Trump is doing to conservatism,” Goldberg warns, “consider the fact that for the last five years no issue has united the Right more than opposition to Obamacare. Opposition to socialized medicine in general has been a core tenet of American conservatism from Day One.” Now the bad news: “Yet, when Republicans were told that Donald Trump favors single-payer health care, support for single-payer health care jumped from 16 percent to 44 percent.” That is some finding, and if he's going to accept it (the poll is here), Goldberg ought to look at his use of “doing to.” Trump didn't make those people into fans of socialized medicine. All he did was reveal that they had no idea what the term means. So what were they fighting when they fought Obamacare? The Obama part, just like the liberals said the right was doing.

The Trump movement, Goldberg writes, “is catharsis masquerading as principle, venting and resentment pretending to be some kind of higher argument.” Well, yeah. That's been going on a while, and Goldberg has been a part of it. Now the conservatives have found a baby too big for him to stomach. That will happen; as the movement pushes the limits of freakishness, certain human reactions may kick in and defectors may peel off. Goldberg may be one of the defectors. But he shouldn't pretend that Trump is something new. Trump is something amplified.

Back to 2011 and the last presidential cycle. Goldberg wrote a column deploring the cologne Trump marketed, and the page in Trump's book where the big man said he was for universal health care. Goldberg really didn't care much for Trump. “Still, I understand why the Republican electorate is so fickle,” Goldberg wrote. “Trump is entertaining and seems fearless. It's fun to watch the media fall for Trump's act and the White House seethe over his 'birther' crusade.” The birther stuff was fun. Basically, beating the drums about a pretend scandal that depended on suspicion of non-whites with foreign-sounding names—you couldn't blame people for enjoying that. But, Goldberg warned, watch out for the shitty cologne and page 205 of The America We Deserve. And he wonders why people don't take him seriously.