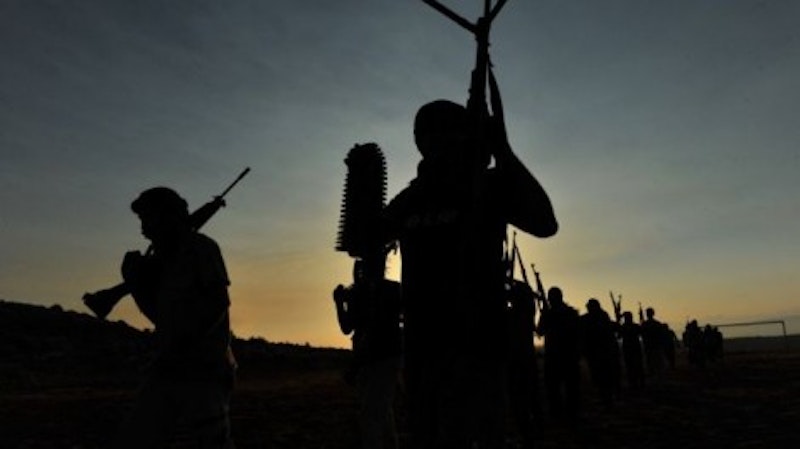 Tomorrow, the 9/11 commemorations will tend to be anti-individualist in tone, lots of talk about banding together in difficult times.

My wise friend Ali Kokmen has observed that half the movies you see these days are basically re-tellings of the first great work of literature, the epic of Gilgamesh and Enkidu, who fight but then become good buddies—and allies against more evil foes, including zombies. Since that tale is from what is now Iraq and Syria, this metaphor may be sorely needed one day soon, if we make good on Gen. Petraeus’ recently-proposed plan to ally with al Qaeda affiliates against ISIS, which is now perceived as the greater threat.

Allying with al Qaeda may sound absurd, especially to people living in DC or here in Manhattan, but you may gradually have to get used to the idea.

It wouldn’t be all that shocking given the U.S. and the UK’s track records regarding jihadists, who we’ve often encouraged, especially when it made life more difficult for Russia. In fact, lately it looks as if we’ve equipped jihadists (including associates of ISIS, not just al Qaeda), opposed Syria’s Assad, cozied up to Cuba, made concessions to Iran, and waxed passionate about the merits of the coup-installed western-Ukrainian government all at least in part for the purpose of peeling allies away from Russia—an understandably angry Russia that is now putting troops into Syria on Assad’s side, it should be noted.

Meanwhile, expatriates from Russia with knowledge of Kremlin politics say Putin has no Hitlerian master plan but is merely a cash-strapped, unprincipled opportunist making it up as he goes along and occasionally alarmed by U.S. hostility. Flirting with jihadists arguably started even before our decades-long conflict with Russia, though.

Since at least Lawrence of Arabia, really—that is, for a century now—the U.S. and UK have periodically winked at or encouraged Muslim extremists in hopes they’d make less trouble for us than for authoritarian regimes we dislike. We thereby helped create Saudi Arabia (later to become the great exporter of Islamic radicalism), helped radicalize Afghanis before and after the ouster of the Soviets, inadvertently or deliberately helped ISIS to massive weapons transfers (meant to go from our jihadist pals in a destabilized Libya to various maybe-pals in Syria), and, as you may recall, tried to cozy up to the post-Shah Iranians with covert weapon sales (under a Republican president) long before the current delusional pseudo-treaty-making of Obama.

The military/intelligence establishment of the West doesn’t want you to know that you (and your civil liberties) are acceptable collateral damage in their efforts to stir the global pot. It appears they’ll keep stirring even if it kills us. I suppose they might get some power or oil contracts out of it, or at least piss off Putin—though at some point it’s worth stepping back and taking a look at Russia, which is arguably not so awful as to warrant such high-risk tactics. The Russians even tried to warn us about the Islamists plotting the Boston Marathon bombing, but the U.S. government apparently thinks it has such things under control.

I can understand the frustration of pro-intervention writers such as young Benjamin Hall (with whom I share an agent), the author of Inside ISIS. He’s seen the carnage ISIS causes in Iraq and Syria firsthand and is ashamed the West hasn’t done more to stop it. I’m not in favor of apathy or cowering before evil myself.

Yet even if one takes his narrative as fully accurate—and dismisses the idea that Western intervention may be what caused the current terrible situation—he describes a region in which there are numerous factions routinely changing sides and in many cases, as with some regional governments, people funding more than one side at the same time, a bit like donors making campaign donations to both the Republicans and Democrats, in hopes of currying favor with whoever comes out on top later on.

Worse, Hall (admirably and humbly) admits that in many cases we simply don’t know which side some factions are on, how they arose, or which if any governments fund them. A similar despair over trying to get a handle on what’s going on over there suffused a recent New York Review of Books article called, fittingly, “The Mystery of ISIS.”

One needn’t be a pacifist or anti-American to suspect that striding deeper into that morass, even with the best of intentions, is very likely to yield ugly results. If painted as a battle between two clearly-defined forces, ISIS and the rest of the world, we all know which side to choose. But if seen as a very opaque, evolving situation that will probably continue to evolve in weird, complex, and unpredictable ways with or without us, we might reasonably choose to sit this one out.

It’s not at all clear that makes another 9/11 more likely and may well make it less so.